For my day job (this is Jamey), I work for a non-profit. A few years ago we decided to try something called a matching gift. It’s when you find a donor who is willing to match any number of donations within a certain time period, and the result is that many more people are willing to give because their donation is doubled. I am always touched by the outpouring of generosity when we do a matching gift.

If you’re 20 days into your campaign and you still haven’t reached your goal, a matching pledge is something to consider if you have someone willing to be the matching donor. It’s fine if they set a limit, even if it’s only $500 or so for a project with a much bigger funding goal. In that case, you would announce to backers in an update that you have a matching pledge available for that day only. Share it everywhere on social media. For anyone who was on the fence about giving, this is a great way for them to get off that fence.

A friend of mine–the artist whose work inspired the final art for Viticulture–did this for a Kickstarter project of his own. Here’s the project update when they announced the match. As Kicktraq shows, the match helped them raise over $2400 in a 2-day period, before which the project had stalled around $4,000 in funding.

This technique is certainly worth a try if your project needs a little push. Feel free to post in the comments if you currently have an active match on your Kickstarter project.

Update: You can see the impact of the matching pledge strategy on the Reading Rainbow Kickstarter, to which Seth MacFarlane pledged to match every pledge between the $4 million and $5 million funding marks (for a total of $1 million).

Also, I’d like to take a minute today to introduce the full art for our upcoming Kickstarter project, a board game called Euphoria (subtitle: Build a Better Dystopia). I’ve been slowly releasing pieces of the board on our Facebook page, but this is the first time I’ve showed the entire board art in one piece. The graphic design for the board is done, but we’ll wait until closer to the Kickstarter release to show that (we’re aiming for May 15 for the launch). 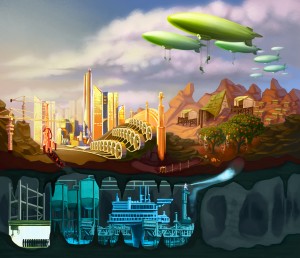