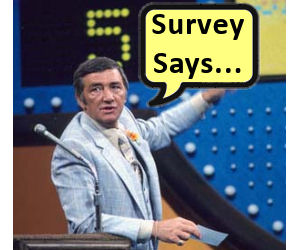 As soon as a few seconds after your successfully funded Kickstarter project ends, you will be able to compose and send a survey to your backers. Today I’m going to talk about when you should send out that survey (hint: Wait more than a few seconds after your project ends), what questions you should ask, the nuances of creating the survey, and a few alternatives to using Kickstarter’s system.

When Should You Send Out the Survey?

If you’ve been researching Kickstarter lessons on other websites, you’ve probably seen the following advice: “Wait as long as possible before sending out the backer survey.” I’m not going to say that advice is wrong, but…well, it’s not correct. For most projects, at least.

The reason you’ve seen that advice is primarily for one big reason: Backer addresses will change, and it’s a little bit of a hassle to change them manually later. Plus, some backers will forget to update their address even if you remind them. That’s a legitimate reason for stalling on the survey, but I think the following reasons for sending it out soon after the project ends are more compelling.

Here’s why you should send out your survey within a few weeks of your project end date:

Now, keep in mind that you only get to send out your survey through Kickstarter once. One shot. So you don’t want to rush the survey. Make sure you know all questions that you need answered from all backers (you can always survey subgroups later through alternative methods).

What Questions Should You Ask? Kickstarter’s guidelines are somewhat clear about the types of questions you’re allowed to ask: They say that you should only ask questions that you absolutely need to know, and you can’t ask marketing or demographic questions. I can’t find anywhere that they elaborate on exactly what that means, but I think they’re saying that you can’t survey backers about how they heard about your project or about their race, gender, religion, etc.

The tricky thing that you may not realize when making your project is that you have to survey each reward tier separately. You actually have input the questions individually for each tier’s survey. This is nice because you can ask different questions for different groups–you don’t need backers to answer questions that don’t apply to them. However, it takes a lot of time if you have a number of reward levels.

If you like to keep all of your backers on one master spreadsheet after the project, having different types of questions can make that spreadsheet difficult to build and maintain. So keep that in mind as you’re structuring your questions (and your reward levels).

Surveys aren’t just for getting the information you need to make and ship the product. Surveying for demographic info isn’t allowed by Kickstarter.

Here are the questions I asked on Euphoria, exactly as phrased on the survey and followed in bold by my notes. You can now choose to make some questions optional and others mandatory.

Preliminary Message: Thanks for helping us create this game! You will have the chance to update your address before we ship, but we need your information to know how many games to send to each of our fulfillment centers. ————International Backers: Please use the English version of your address, and capitalize letters in your full postal code. GREAT BRITAIN backers: Please enter your region in addition to your city.

Pro Tip: Pick the core reward level with the fewest backers and send their survey first, then wait a few minutes to get some completed surveys. Then look over a completed survey to see if it makes sense from your perspective. That also gives those backers a few minutes to post questions in the comments, just in case something is confusing to them. If you need to change something in the format, you can do so before sending out the survey to other reward tiers.

What Alternatives Are There? Having used an alternative survey method for Viticulture (Google Forms), I think Kickstarter’s platform is the way to go. But it certainly has it’s flaws and restrictions, as mentioned above. If Kickstarter isn’t giving you what you want, here are some other options:

That’s it! I look forward to hearing your thoughts on important questions to ask in surveys, annoyances that you see in some surveys, and what you think about my stance on survey timing. Also, if you have any alternative ideas, let us know!

UPDATE 1: The guys over at Hibermate, a very successful Kickstarter campaign, have created a video that shows you how to combine all the downloaded backer reports into one Excel file. Check it out here if you’re a Mac user.

UPDATE 2: Here’s a condensed version of the survey I sent out for Scythe, a much more recent project than Euphoria:

Thanks for helping us create Scythe! There’s lots of variability and customization within each pledge, hence the detailed survey below. For shipping, please use a secure, reliable address. You will have the chance to update your address before we ship. All pledges are closed and final; all pre-orders and add-ons from now on are made here: (Bitly link to Celery pre-order page) (use PROMOCODE to get free shipping when combining new stuff with your original pledge).

*This is another reason why add-ons make a project more difficult than it should be. You may only have a tiny percentage of backers that added your t-shirt to their survey, but you have to ask every single backer what t-shirt size they want because those backers are scattered across all reward levels.