Kickstarter Lesson #46: Your Target Audience Is Not “Everyone”

When I was preparing to launch Viticulture last year, I viewed my target audience as the following:

It wasn’t the “everyone” I mention in the title of the blog post, but that’s still a big net to cast. Was I wrong to “target” so many different demographics? Fortunately I have the data from my backers survey: 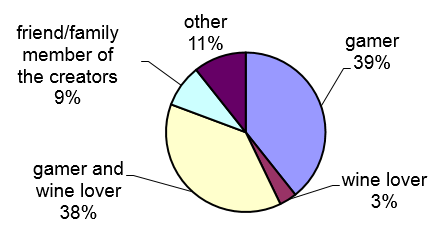 This is really revealing. Nearly 80% of backers were gamers. Which, in hindsight, should have been obvious–clearly the type of people who want to buy a board game are gamers. And yes, many of those gamers were also wine lovers, but that’s the order of operations there–given the 3% of people who were purely wine lovers, I think it’s safe to say that the majority of backers in the “gamer and wine lover” category were gamers who happened to love wine.

My point is that it’s easy to trick yourself into thinking that everyone will want to support your project. And even if they don’t, what’s the harm in trying to reach everyone? Here are a few reasons why it’s not a good mentality:

I’ll give you an example from a project I consulted on recently: A well-intentioned creator sent me a link to his failed Kickstarter project. There were a lot of factors that contributed to him not reaching his funding goal, but one thing in particular stood out.

The project was for a very small subset of people–people who like a specific RPG. Granted, some random RPGers who had never heard of the specific RPG may have been interested in the project, but the main target was–or should have been–people who loved that specific RPG platform and universe.

However, the project creator–again, a nice, well-intentioned guy–spent a lot of time on the project page explaining some terminology that all RPGers know. Not only is the project page precious real estate, but by including information that his target audience already knew, he diluted the more important info on the page.

It’s our tendency as creators to try to include everyone, and there are certainly ways to do that without alienating your target audience (e.g., use the FAQ section). But by trying to include everyone, you lose focus on those who care the most–those are the people who give you the best chance of succeeding.

This applies not just to the content on the project page, but perhaps more importantly, to your marketing efforts and blogger outreach. You might think that a million people want your game, but who are the 1,000 most likely people to actually back it during the campaign? Figure out who those people are and focus on them.

And sure, there are tons of blogs out there in every industry that you could reach out to. But your time is limited, and many of those blogs may not be interested in your specific product. Focus on your favorite blogs whose writers and audiences will get excited to get the inside scoop from you.

I’ll end this post by sharing the revised strategy I employed when I launched Euphoria a few months ago. I had a critical choice with Euphoria: Do I only focus on gamers, or do I also try to tap into the massive audience of dystopian literature lovers?

I ended up focusing solely on gamers. I plugged the dystopian angle among those gamers, but I didn’t try to convert any non-gamer dystopian lit readers into gamers. My reason: It isn’t the right game. Euphoria isn’t a gateway game. If it were a lighter game that might appeal to the average reader of The Hunger Games, absolutely, I would have been tweeting Suzanne Collins all over the place. But rather than spend my time selling a complex game to non-gamers, I decided to spend that time connecting with my existing backers.

What do you think? Was that the right strategy?

11 Comments on “Kickstarter Lesson #46: Your Target Audience Is Not “Everyone””