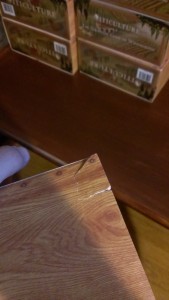 This entry is mostly geared towards board game Kickstarters, but it could apply to other projects too.

A game designer recently contacted me for advice on how to run a Kickstarter project. Before I even referred him to this blog, I asked him a question that I’ve started posing more and more to game designers: Do you want to be a game designer, or do you want to run a game company?

Once you decide to run a Kickstarter campaign, by default you also run a company. It’s a lot more responsibility than just designing a game, and a lot of those responsibilities are not apparent from the beginning.

One such element is dealing with replacement parts after your product has shipped.

Panda Game Manufacturing, the company that manufacturers our games, promises a 99% perfection rate. That’s awesome. But that other 1%…it’s quite a hassle. And much more expensive than you think.

Back in May, I got my first replacement part request for Viticulture. It was from a Kickstarter backer in Malaysia who was missing one of the clear glass tokens in Viticulture. There are 60 identical glass tokens in the game, but he was one short. To send him that single token would cost $24 via USPS (that’s flat rate. It wasn’t until later that I realized I could send first-class mail for about $7 for a single token).

I wasn’t quite sure what to do. I’m sure you can tell by the other Kickstarter Lessons and the way I run my Kickstarter campaigns that I aim for exceptional customer service at all times.

However, I struggled with the request. It was 1 token out of 60, and it’s incredibly rare that you’d even get close to using all the glass tokens in Viticulture. It would cost me $24 to send that single token, a token that costs a $.01 to make.

I reached out to Michael Mindes, the president of Tasty Minstrel Games and author of this great article on customer service. I asked him what I should do, and he told me what I needed to hear (even though I didn’t want to): The backer bought a game with 60 glass tokens, and he didn’t receive all 60. I owed him 1 token.

So I sent him the token.

Since then, I’ve received about 50 requests for Viticulture replacement parts (that’s out of the 2500 copies in circulation, or 2%). I always reply immediately and get the item in the mail within a few days. Cards are much easier and cheaper to send than tokens because they’re less than the 1/4th of an inch that increases the price for USPS. Sometimes bigger items are needed, like vineyard mats or game boards.

A lot of replacement parts I’ve sent were token issues. For example, a game might have 7 blue workers instead of 6 workers and 1 rooster token, so I need to send the rooster. About 25% of the requests were for parts damaged in shipping. So far I’ve had very few people ask me to replace parts due to spills or damage (which surprises me a bit, considering it’s a wine-themed game). But I’m ready for those requests when they come.

The obvious advice here is to exceed your customers’ expectations when you provide service. Reply to them right away and send them what they need within a few days. People remember great customer service. They tell stories of great customer service to their friends. Whether you’re running a single Kickstarter project or your trying to create a lasting brand, it can never hurt to have people saying good things about you.

Beyond that, here are a few helpful tips and tricks regarding replacement parts:

I’m curious what you think about replacement parts. If you’ve had a great customer service experience with a fellow game publisher, feel free to share it in the comments below. I’m telling you, people don’t forget those positive experiences!