UPDATE: Since originally writing this post, my stance on exclusives has changed. As I write here, I no longer think that exclusive content in any form is good for the long-term viability of a product launched on Kickstarter. I’ll leave the rest of this entry untouched so you can see how my thoughts on this controversial subject have evolved over time.

Back when I was researching Kickstarter campaigns in preparation for my Viticulture project, I noticed a trend among successful game projects: Most of them offered some form of exclusive content. On some projects it was built into the primary level for the game (like promo cards); on other projects it was included as a premium reward level or on the stretch goals.

I thought all of those ideas had merit, so I tried all of them in various ways for Viticulture. I had promo cards, special components added to the box via stretch goals, and a premium level that included an exclusive expansion.

Those may seem like pretty innocuous additions, but they’ve had long-lasting repercussions on Stonemaier Games. That’s why I wanted to write this cautionary post so you can consider the full impact of Kickstarter exclusive content.

I used to think that price was the distinguishing feature on Kickstarter. You take a gamble on a stranger and hope they send you something cool a few months later, and you get a special price for taking the risk.

Price is important (as are many other factors on Kickstarter, including the project creator), but I’ve learned that one of the most compelling reasons that people support Kickstarter projects is exclusive content. I’ve experienced this firsthand as a backer–if I think I’ll be able to get a game after the Kickstarter campaign, exclusive content is key for me to go ahead and back it now. It’s not the sole factor, but it definitely plays a role.

I should note here that there are many self-contained projects on Kickstarter for which exclusive content is relevant. If you’re trying to raise funds to create 100 woodblock prints of your cats, that is the exclusive content. You’re not going to continue selling the prints after Kickstarter, so you don’t need a reason to distinguish that non-existent product from your Kickstarter rewards.

However, if you intend to continue to sell your creations after Kickstarter, now you’re running a business, not just a campaign. In that case, you definitely have to give people many compelling reasons to support you now instead of just waiting for the retail version of your product. That distinction–the Kickstarter version vs. the retail version–will be a defining decision for your company.

In my research for Viticulture, I overlooked one key distinction in exclusives–are they gameplay exclusives (i.e., promo cards or expansions) or are they component exclusives (custom pieces, box sleeves, etc)?

While this is a question mostly for game creators, it applies to other projects as well, but moreso in the context of content exclusives vs. component exclusives. For example, in a book project, do you offer an exclusive hidden chapter or do you simply upgrade the paper quality?

I didn’t realize the importance of this distinction, but its impact is huge, especially in the board game space. Most gamers want the full game experience, not just part of it. It’s like if Pandemic released a new expansion, but they only sold it to 1,000 people. Everyone else who loves Pandemic would suddenly feel like they’re missing out on the full game experience, and there’s nothing they can do about it if they don’t make the cut.

Now, that’s an extreme example–after all, on Kickstarter, there are rarely limits to the production. Everyone has a chance to get that exclusive content for a limited time. But plenty of people won’t even hear about your product until well after the Kickstarter is over. And others might hear about it, but they don’t realize how much they like it until they see it at a convention or a friend’s house. By then it’s too late, and they’re stuck feeling like they’re playing an incomplete game.

Component exclusives don’t have the same level of letdown as gameplay or content exclusives. Sure, it’s nice to get upgraded components (see the gold, stone, and clay tokens in Euphoria) and iconic box sleeves, but they feel like extras instead of essentials. That’s a key difference.

The Impact on Stonemaier Games

Like I mentioned, we included several gameplay exclusives in Viticulture. The impact has been much bigger than I thought. On one hand, it’s probably been a top reason that no one took us up on our money-back guarantee. The full Kickstarter version of Viticulture with the Arboriculture expansion does quite well on the secondary market.

We’ve been fortunate that we sold out our print run of 1200 retail copies of Viticulture. But the existence of those Kickstarter-exclusive gameplay elements makes the retail version a harder sell. Also, it has affected the way that some people view our permanent brand, despite my efforts to point out that I learned my lesson and changed course for Euphoria.

It has also impacted our strategy moving forward as we design the Tuscany expansion pack for Viticulture. Ideally I would included Arboriculture in all versions of the expansion pack, but it forever carries a label of “Kickstarter exclusive.” How do you circumvent that without disrespecting your backers? You can’t.

What You Should Do

This is easy: Don’t do what we did for Viticulture, but do exactly what we did for Euphoria. Don’t include any gameplay or content exclusives; instead, include a smattering of component upgrades and specials. Don’t let those upgrades add up to the point that the retail version pales in comparison; instead, be selective and choose some really cool ways to reward your backers. You can see what this meant for Euphoria on the chart at the bottom of this entry.

Also, give yourself a little bit of wiggle room. Include a note in the FAQ that although the vast majority of Kickstarter-exclusive versions of your game are for backers, you reserve the right to designate a few for bloggers and reviewers who were good to you during the campaign, conventions libraries and play-to-win sections, and charitable giveaways. After all, you will need to print extra copies of the Kickstarter version of your product to make up for lost and damaged products, so you’re bound to have a few extra copies when the dust settles.

For your sake, I hope you read this and take it to heart. It’s one of those cases where if you go on Kickstarter right now or research most past successful projects, you’re going to find they contradict this advice. Please don’t make the same mistake I did and assume those projects are correct (Viticulture among them). Just because gameplay exclusives led to successful funding doesn’t mean they’re the best way.

I strongly believe that component exclusives are the best and only way to offer exclusives on Kickstarter. Have any other project creators tried both methods and would care to share their insights in the comments?

Addendum: One additional idea I haven’t tried is a time-based exclusive (preferably component, but possibly gameplay). The idea is that the exclusives are exclusive for, say, 2 years, after which the barrier of exclusivity is lifted and you can produce any version of the product that you want. That way, Kickstarter backers can enjoy the exclusives for a significant amount of time before anyone else, but you eventually have the freedom to pull some of the most appealing exclusives into the retail version. What do backers think about that concept?

Also see this retrospective entry about my Tuscany Kickstarter campaign for notes on this subject. 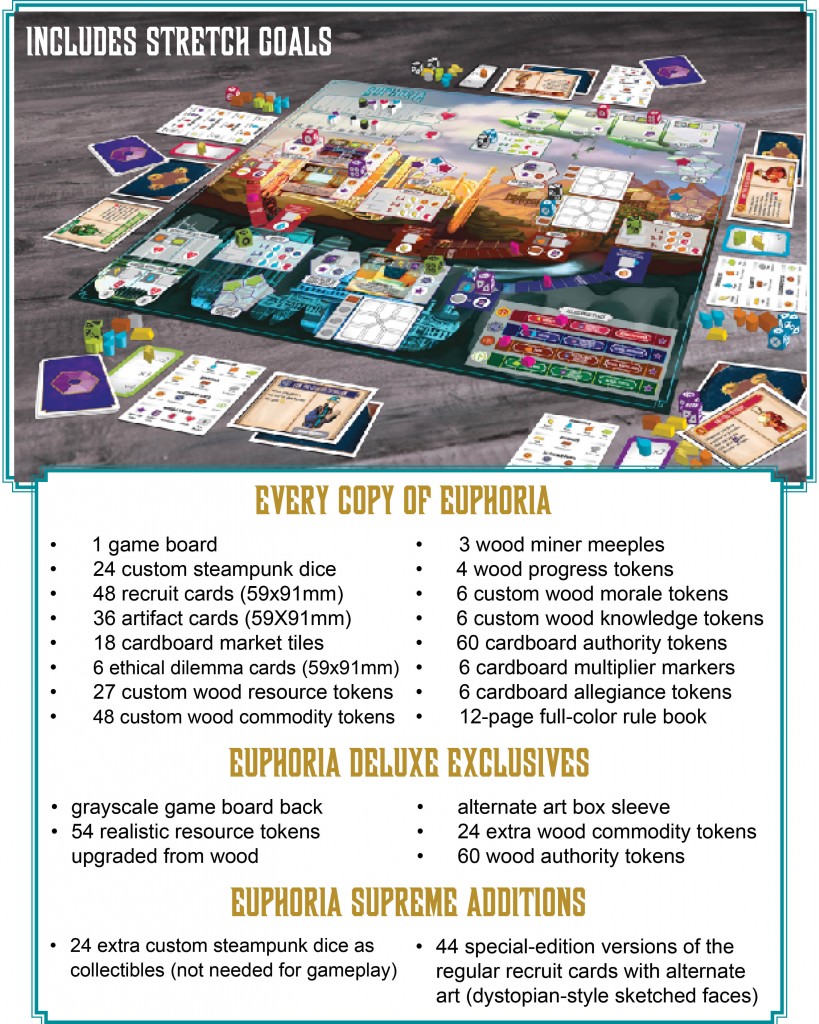