The deceptively obvious answer is via Kickstarter updates. For most types of project-related communication, the updates are great. They go out via e-mail to all backers who still subscribe to your updates, and they’re easy for unsubscribed backers to check on from time to time on Kickstarter’s website. If you go too long without putting anything here (more than a month), both attentive and casual backers will wonder if you’ve taken up residence in Tahiti with their money. The only big problem with Kickstarter updates is that if you have a really important announcement, anyone who has ever unsubscribed to your updates won’t get the message in their e-mail inbox.

There’s also Kickstarter’s messaging system, which lets you send messages to individual backers or to an entire reward tier. This is handy for targeting specific groups of backers if you have an announcement or question just for that group, but arduous if you need to send the same message to ALL backers, because you have to copy, paste, and send the message to each reward tier one at a time. 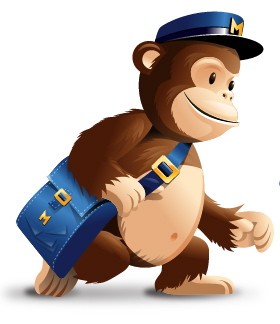 MailChimp offers a way for you to send elegantly designed mass e-mails at affordable prices. So if you have your backers’ permission to send them updates, MailChimp is a great way to do so, particularly for monthly e-newsletters like we do at Stonemaier Games. If you’re trying to create and sustain a business (opposed to merely creating a single product), getting those e-mail addresses for regular engagement and announcements is incredibly important. Here’s my referral code if you decide to use MailChimp.

Even if you’re just trying to create a single product, MailChimp is extremely helpful for the most important e-mail you’ll ever send to your backers: The e-mail you send about a month before your product ships asking backers for their updated mailing address (to see why you should send the backer update soon after your project and then follow up months later with an address update request, see Kickstarter Lesson #42). This is the one e-mail where you really need ALL backers to get the message, not just those who subscribe to your project updates.

As I discussed in Kickstarter Lesson #52, you should have a blog (via your website). You should have created it a long time ago (not after the project), but it’s never too late to do so. The blog is a great way for you to explore pretty much anything in long form for backers who want to get to know you better. A blog is a passive form of media, meaning it’s great for people who actively choose to engage with it and great for those who don’t care at all, because you’re not clogging their inbox with photos of your cat in board game boxes.

Facebook is my social media platform of choice for mini-updates because it’s excellent for conversations, it’s very visual, and it has a semi-permanence to it. A backer may only check our Facebook page once every few weeks, but when they do, it’s very easy for them to see everything that you’ve posted about. The only downsides are that some people really don’t like to use Facebook, and even for those who do Like your Facebook page, they’ll only see your posts about 10% of the time based on Facebook’s feed algorithm (you have to pay if you want everyone to see the post). Still, at 1.2 billion users compared to Twitter’s 40 million, you can’t ignore Facebook as a project creator.

YouTube is the best way to have “face time” with the community you’re building. I use YouTube to talk about game design in short, weekly segments called “My Favorite Game Mechanism.” It’s great for visual presentations and for showing your personality, and YouTube has a robust comments system.

Last but not least we have Twitter, which kind of operates like a giant chatroom. Anyone can jump in or out of a conversation at any time. The thing about Twitter is that it’s fleeting, so if you have something important to say, this isn’t the place for it. I actually think Twitter is the best place to jump onto other people’s conversations rather than try to establish your own (but a healthy mix of both is fine).

Let’s recap and summarize what these various platforms are optimal for (in terms of post-Kickstarter communication):

Overall, the key is to use a mix of all of this media. For any active media (Kickstarter updates, messages, and MailChimp e-newsletters), spread them out so people aren’t getting them one after another. I consider Twitter and Facebook semi-active media in that only people who opt-in will see it, but those who have opted in might get annoyed if you’re too self-promotional or boring. So I like to spread out my posts, particularly on Facebook (2 a day at most). And the blog is a passive form of media–you can post there as often as you like.

Am I missing out on any necessary platforms for post-campaign communication? Telepathy? Carrier Pigeon? Smoke signals? Google Plus?