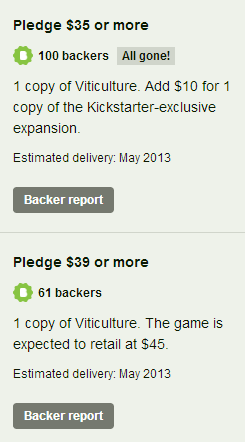 Perhaps even more controversial on Kickstarter than exclusive content are early bird pledge levels. As you can see on the example from Viticulture on the right, an early-bird reward is a limited pledge level that is strictly better (usually in terms of price) than a comparable level.

Forward momentum is incredibly important when you’re running a Kickstarter campaign, particularly on the first few days. However, I think many project creators (myself included) assume that early bird pledge levels are the best way to get the project off the ground at the beginning.

Now, I’ll agree that early-bird rewards are compelling, especially for first-time creators. Most likely you don’t have much of an established audience, so any attention you do get the first few days can be translated into pledges if you have an urgent reason for them to back now instead of later.

So let’s just be clear about that: The sole purpose of early-bird pledge levels is to give potential backers a reason to pledge now instead of later on the first few days of a creator’s first Kickstarter project.

Given that goal, before I get into the nitty-gritty of early-bird pledge levels, here are 4 ways that are strictly better–and less offputting–than early bird rewards:

Just in case you can’t tell, I do not support the use of early-bird pledge levels for non-first-timer project creators. If you have an established audience, there is no reason that you need a gimmick like that to draw in backers (unless you wronged your previous backers somehow, in which case you have a bigger problem to address). Instead, use methods 1 -3 above to compel your previous backers to support your new project early on.

The Downsides of Early Bird Levels

There are a few very specific downsides to early bird pledge levels. I experienced all of them firsthand through Viticulture, and those I chose not to repeat them with Euphoria (with Euphoria, I calculated what my early bird price would have been and just made that the unlimited base reward level for everyone).

Okay, you’ve heard my perspective on all the reasons why you shouldn’t do an early-bird pledge level. However, if you still feel the need to do so and you’re a first-time creator, here are a few methods to consider:

What do you think? Please share your perspective on early-bird pledge levels on the poll below and in the comments.