Kickstarter Lesson #75: Include at Least One Must-Have Component

Note: I try to keep these Kickstarter Lessons applicable to all project categories, but this one is mostly about board games.

When I design a game, I try to design the full experience. From day one I’m not just thinking about the mechanisms and theme, but also the components, look, and feel of the game. They might change over time, but I’m always thinking about them.

The same goes for a game that I intend to put on Kickstarter. Kickstarter is actually a really good frame of reference for game design: What is the most basic version of the the game that is still a lot of fun? That’s your core game, pre-stretch goals. That’s how you keep your funding goal low. And that’s a good frame of reference to simplify your game design (complexity creep is very common among game designers, myself included).

Also, it’s important to keep in mind that when you’re thinking about all of these crazy awesome components your game could have, you don’t actually need a ton of them. In fact, I believe that the key–something that could make the difference between a successful and an unsuccessful Kickstarter project–is to have one must-have component.

Despite my design methods, this component didn’t occur to me until I was well into blind playtesting for Euphoria. One day I was looking at the dice in the game (standard 6-sided dice), and I thought, “Wouldn’t these stand out a lot more if they were custom dice?”

I talked to my manufacturer and my designer, and we put together a plan to create the custom dice. Getting dice exactly right is a precarious aspect to the production process; it’s something that can greatly delay a production if you have to fix the dice mould multiple times.

So I hedged my bets. I had no idea if Euphoria would succeed or fail, but I wanted to give it the best chance to succeed, and I decided that meant being able to show actual photos of the custom dice, not just 3D renders. So I paid for my designer to design the dice (we tested the colors using a colorblind app and colorblind gamers) and had Panda to sculpt samples of the dice.

I decided to make the custom dice something to aim for during the Kickstarter campaign instead of including them in the core game. Like I’ve mentioned, keeping things simple keeps your funding goal low. Also, it gives backers the satisfaction of knowing that their pledges made the game better. They did this–they built this.

However, for must-have components, I think it’s really important that they go in every copy of the game–Kickstarter or retail. This is a defining component, not something that only some people get.

I don’t have any hard data to back up my claims about a must-have component, but the following photos might help you understand the impact. The first photo is of the Euphoria prototype with regular dice. The second is of the prototype with custom dice. And the third photo is the final game with a big pile ‘o dice. 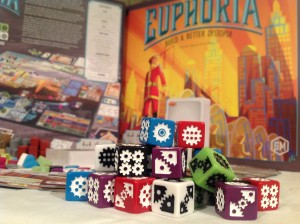 There’s an emotional response to seeing something unique, right? Even if you don’t care about the dice, it says to backers that you’re going out of your way to make something unique, something that only exists within the microcosm of this game, this Kickstarter project. It provides that little burst of endorphins that make us want something without even realizing why.

I’m sure there are many variations on the must-have component idea, but here are my recommended guidelines to maximizing the value and impact of it:

I’ve talked about Euphoria here, but I stand on the shoulders of giants when it comes to must-have components–many have come before and after Euphoria from other creators. One that comes to mind off the top of my head are the dieships in Burning Suns. But there are a number of non-dice examples too. What’s one must-have component you saw on Kickstarter that made you salivate?

32 Comments on “Kickstarter Lesson #75: Include at Least One Must-Have Component”