Recently we featured a guest post about prototyping by game designer Michael Iachini. If you are a game designer–particularly one preparing for a Kickstarter–I highly recommend that post.

I’ve recently gone through the review prototype process for my game, Tuscany (on Kickstarter on March 12), and I wanted to share some of the things I learned with you. I’ll start with the custom meeples, because custom meeples are awesome.

One of the new expansions introduced in Tuscany includes 5 different special worker types for each player. A different combination of these workers is available each game, and players still have a total worker maximum of 6 workers (regular, grande, and special).

When you’re running a Kickstarter, the visuals for your product are incredibly important. They’re even more important for the copies you send out to reviewers, because many reviewers use video footage and photos to show people how the game works.

So after we designed and tested what each new worker meeple does, I sent their names and descriptions to my graphic designer, Christine Bielke. She designed a few options for each meeple and sent me the outlines, as seen below.

We also had our artist, Beth Sobel, touch up each of the meeple icon for seamless integration with each of their reference cards. You don’t need these for prototyping.

Then I sent the outlines to Panda Game Manufacturing to make sure they could work. They approved the designs and sent me estimates for various options:

After that I sent the meeple outlines over to Frank at PiasaPro. Frank is a local guy in St. Louis who I know through the board game community. Frank can make pretty much anything out of wood with his laser, and he can do it fast and cost-effectively. He can also paint them different colors (1 color per meeples)–for example, Viticulture/Tuscany is a 6-player game, so there are a total of 30 special worker meeples in 6 different colors. E-mail Frank at frank@piasapro.com and tell him I sent you. Here’s what we got from Frank for Tuscany (and yes, the oranges will match in the final version): 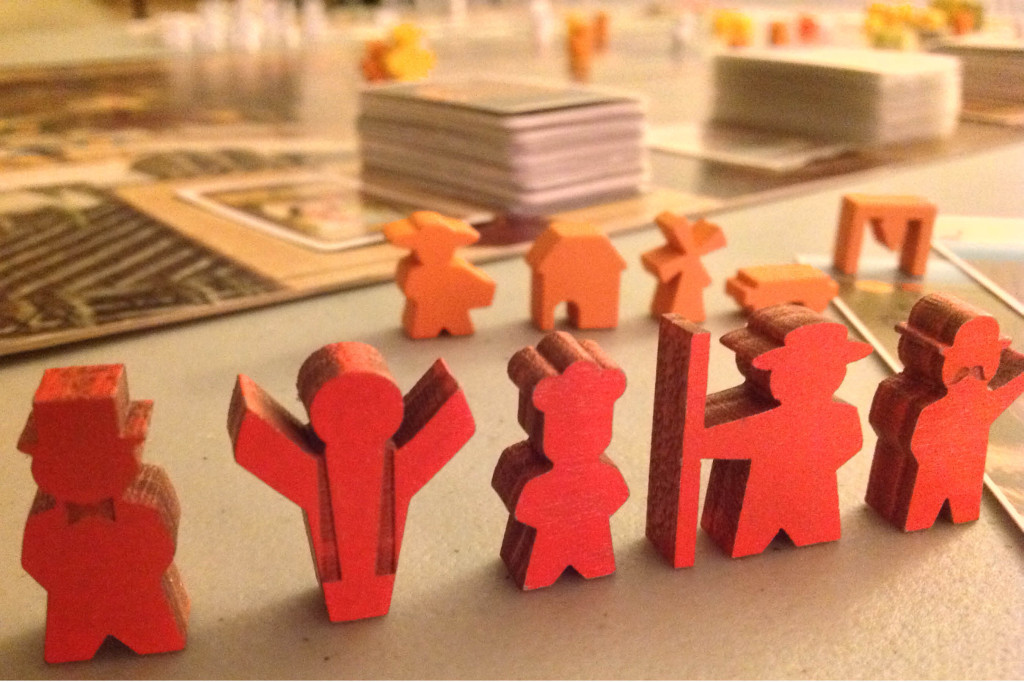 The other aspect of review prototyping that I recently experienced was working with Print & Play Productions. Michael writes about a lot of other great options on his guest post, but I had met Andrew at Geekway to the West last year, and I knew I wanted to work with someone like him who would reply quickly to my questions.

You can check out their website to see their full range of offerings, but I purchased the following:

Like I said, being able to e-mail back and forth with Andrew to make sure everything worked was really helpful–he’s very responsive, and he’ll point out things that need to change if necessary for the printing to work. I highly recommend Print & Play. 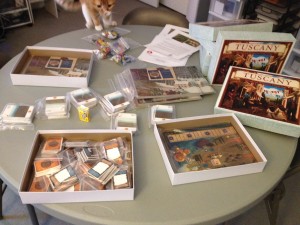 I did make one mistake in sending the prototypes–I forgot to include influence cubes! Fortunately my reviewers have plenty of them. But it was a good reminder to go through the checklist of every game element before you send out the review prototypes.

I’m curious if anyone can speak to something that I have no experience with: Making prototypes of plastic miniatures. If you have experience with that and have enough to say that you could write a guest entry about it, contact me at contact@stonemaiergames.com. I think other creators would benefit from that information.