Kickstarter Lesson #169: How to Have Fun with Your Backers

Today is April Fools’ Day. There’s about a week left in my Tuscany Kickstarter campaign. Honestly, as much as I love April 1, I was a little worried about today. It’s tough to take anything on the internet seriously, and the last thing I want is to confuse backers.

So I didn’t plan on doing anything for April Fools. That is, until I watched this video from a teleconference company called American Well late last night. It helped me understand how a Kickstarter company can use April Fools as a fun way to reach out to backers and even highlight their strengths.

From what I understand, American Well is a company that lets you chat with doctors using a web chat platform. Their April Fools video plays off that idea and expands it to video chats with puppies. It’s charming, funny, and it brilliantly shows what American Well’s product is capable of.

That’s when it hit me: For a company, April Fools (and any time you want to have fun with your backers) shouldn’t be about fooling your customers. Rather, it’s about having fun with them in a way that demonstrates value.

It boils down to three objectives/cautionary notes:

So last night when I was trying to figure out what to do, I made a short list of the things we do well at Stonemaier Games. Most notably, I think, is our customer service. So I decided to play off of that. You can see the full Kickstarter update here, but here’s the key text and images:

As you know, I try to be available at all times of the day to interact with you and answer your questions. But there are certain times that I need to step away from the computer to eat, sleep, and shower.

You deserve better than that.

Thus we’re announcing a new level of premium customer service available only to Kickstarter backers. All you have to do is print out one or both of the following posters and hang it by your desk. Whenever you have a question or comment for me but I’m not available, you can look at the poster, say your comment out loud, and tear off an appropriate response from the hang tabs.

We offer a variety of responses for the wide variety of creative comments and questions you may have, and the poster is available in two different varieties: my joyful face and my cat, Walter. You can continue to use these after the Tuscany Kickstarter ends next week if you miss the constant interaction (but don’t worry–I’m not going anywhere!) 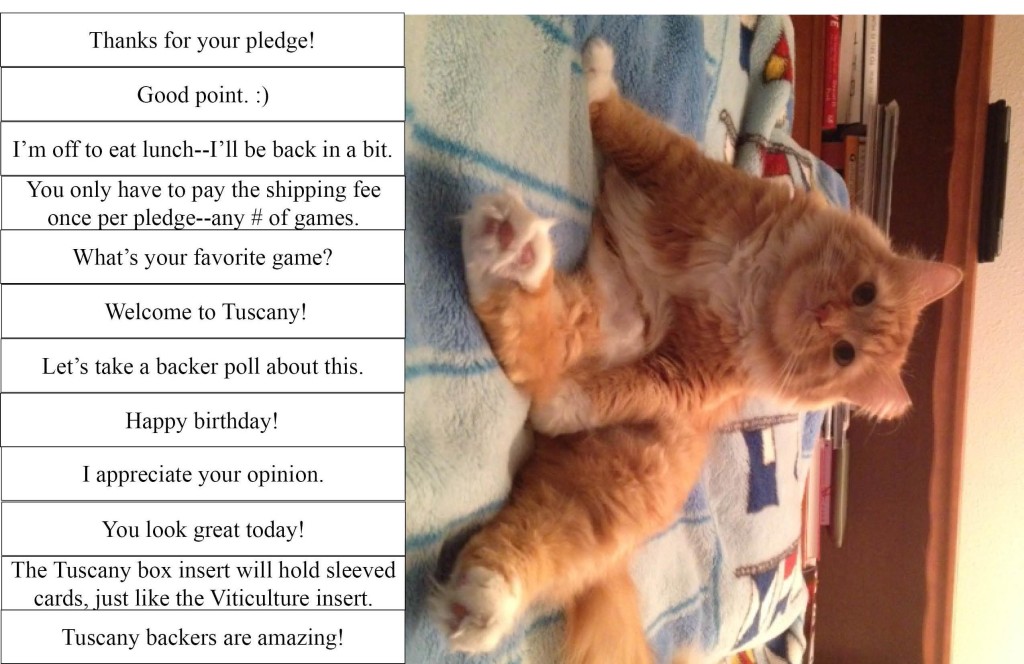 I went through many of the comments I’ve made on Kickstarter and realized that I use a lot of the same phrases, so I used those phrases on these posters. Not only did the update highlight our customer service, but it also informed backers of some key information that I’m often asked about in the comments.

I’m sure many of you are way funnier and more creative than me, so if you think of some neat ways to have fun with your backers in the future (or if you received any other interesting updates today that you thought worked well to demonstrate this point), feel free to share them in the comments below.

6 Comments on “Kickstarter Lesson #169: How to Have Fun with Your Backers”