Tribes–a term coined by Seth Godin to refer to the people who follow you on social media–are a funny thing, especially on Kickstarter. One of the most common pieces of advice you’ll hear about Kickstarter is that you need to have an established tribe before you launch your campaign, or else the project might be dead on arrival.

But tribes can be also be misleading. Just because you have an avid fanbase doesn’t mean that they’re interested in your Kickstarter project.

This first came to light a few weeks ago when I listened to a fascinating episode of Funding the Dream with guests Michael and Stephen Stagliano. The brothers were seeking support for a game called Mice & Dice, and even though the project was failing, their candor on the podcast is refreshing to hear.

The most interesting thing to me is that Michael Stagliano is somewhat famous. I had never heard of him, but he talks about how he was on the TV show The Bachelorette and Bachelor Pad seasons 2 and 3. He has over 98,000 Twitter followers and nearly 9,400 fans on Facebook.

And yet their Kickstarter campaign–which was well researched, attractively displayed, and priced fairly–only garnered 176 backers.

Let me give you one other example, and then I’ll make my point.

The other example is a campaign that is currently on Kickstarter and has actually reached its funding goal. It’s a survival board game called Doom and Bloom’s SURVIVAL. Just like Mice and Dice, it’s a well constructed campaign, but in the month it’s been on Kickstarter, it has raised $22,890 from 328 backers.

Out of context, those numbers are nothing to scoff at. But let’s compare them to Doom and Bloom’s tribe. The company is run by Joe and Amy Alton, authors of a book called The Survival Medicine Handbook and the hosts of a podcast/YouTube channel about surviving in the wilderness.

Joe and Amy have done a great job of building up their tribe. Their Facebook page has 6,273 fans, and their YouTube channel has over 8,000 subscribers. They shared with me that they’ve sold about 40,000 copies of their book, and their podcast has been downloaded over 136,000 times in the last 4 months.

By all accounts, they have an extremely loyal, attentive following, one that any Kickstarter creator would be envious of. But those numbers are in stark contrast to their 328 backers.

I talked to Joe and Amy about their numbers, and they mentioned that in preparation and promotion for the campaign, they attended 3 preparedness and survival expos to show off their game to the audience there, and they’ve marketed the game on several related survival podcasts.

However, my post-campaign data revealed that only 4% of all backers were purely wine lovers, compared to 76% gamers. Did spending my time on an audience that wasn’t going to make much of an impact on the campaign?

I wondered the same question about the Doom and Bloom campaign, so I asked Amy if she would consider polling her audience to ask what their connection was to the campaign. Here are the results of the poll: 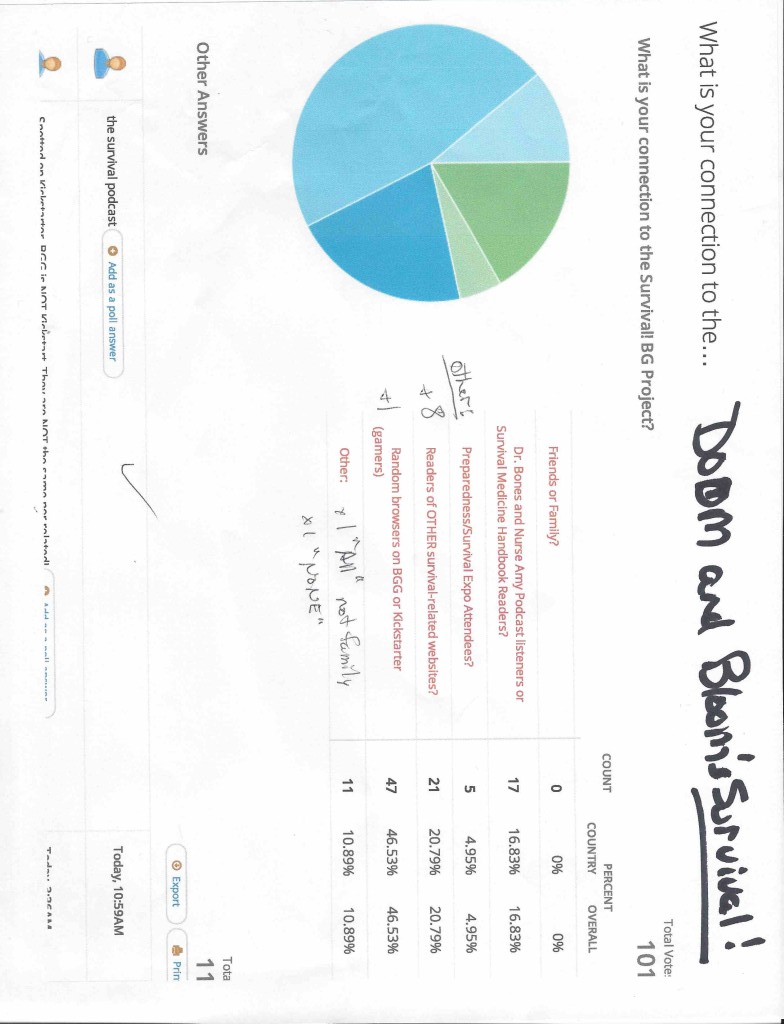 The results aren’t as stark as those for Viticulture, but you can see the disproportionate numbers between gamers and non-gamers.

But most interesting to me is that despite the sheer size of the Doom and Bloom tribe, so few of those people have supported the campaign. Part of that might be Joe and Amy’s low-key approach to sharing the project with their followers–they haven’t said much about it, knowing that many of their fans want to hear about survival tips, not board game promotions. I can certainly appreciate their respectful approach to those fans.

Now, I don’t mean for this to sound helpless. You might be reading this and thinking, “If these people have tens of thousands of followers and they can only get a few hundred backers, how am I going to get backers on my project?” I get that, and I have some pointers for you to consider:

What are your thoughts? If you’re a Kickstarter creator, do you have any insights to share about how you built your tribe and how it translated (or didn’t translate) into Kickstarter success?