Kickstarter Lesson #94: The Top 10 Ways to Survive and Thrive on BoardGameGeek

I try to make these Kickstarter Lessons as universally applicable as possible (even though I make board games, this isn’t a board game blog), but today I’m going to step away from that rule to write about BoardGameGeek, or BGG. This is an entry written specifically for board game Kickstarter creators.

My first exposure to BGG was back in 2011 when I started designing Viticulture. Many readers of this post will have far more experience than me, so feel free to chime in with your wisdom.

Just in case there’s any doubt, posting your game and being active on BGG is an absolute requirement for any board game project creator. This is where people who love tabletop games go to talk about tabletop games. It’s ranked among the top 5,000 websites in the universe. And membership on BGG is free.

Here’s what I’ve learned during that time as a project creator:

1. Post Your Game to BGG: As soon as you have a name and a somewhat accurate description of your game, claim your spot on BGG. I would describe this elaborate process here, but a fellow blogger has already done so much better than I could have. So go check out that entry on This Is the Front (unfortunately, it looks like this entry is no longer available to the public) if you haven’t gone through this process before. The article also delves into the process for posting images to BGG, which is really important–people love visuals, and if enough people “thumb” your image, it will appear on the homepage (you can recommend that backers thumb specific images from time to time, but you cannot make a contest out of it). 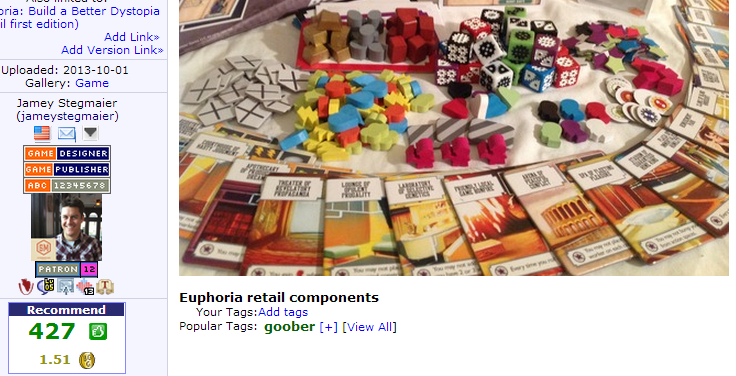 2. Subscribe to Yourself: One of the cool things about BGG is that you can subscribe to pretty much anything or anyone. There’s a “subscribe” button on the right side of the page for any game, and it’s in the drop-down menu for any user. Although it’s completely self-serving, I think the most important things to subscribe to are your games, your name, and your company. That way, whenever anyone writes anything about you on BGG, you can read about it (that can be a good and a bad thing–I’ll get to that in a minute). Whenever you log on to BGG, you’ll know how many new subscription-driven notifications you have based on this box in the upper left of the screen:

3. Ads Are Worth the Money…If Done Properly: As I discussed on the Tuscany stats blog entry, we spent $700 on BGG ads during the Kickstarter project and had a $12,500 return on investment. Thus I definitely think BGG ads are worth the money, but you need to make sure they’re professionally designed–an ugly ad is going to hurt you, not help you. Also, no matter how great your BGG ad is, if someone clicks through to find a confusing, over-priced, unappealing Kickstarter project, the ad isn’t going to help.

Also, very important: Do NOT make ads that have moving or flashing images. They might be eye-catching, but it’s the wrong kind of eye-catching.

The other nice thing about buying ads on BGG is that BGG will then put a Kickstarter widget under the main image for your project. The minimum for a BGG ad (three banner sizes) is $500, and you can “take over” the BGG homepage for a day for an additional $200. I would recommend contacting Chad to schedule your ad: chad@boardgamegeek.com

4. Subscribe to the Kickstarter Board Game Geeklist: A geeklist is a list of items (usually games) that anyone can compile. There are many useful geeklists on BGG, but the single most important list to you as a project creator is this geeklist created and maintained by Matt Wolfe. It’s a daily update of every new Kickstarter project, complete with Kicktraq graphs and summaries. This is your daily research. Subscribe to this list and look at it once a day to see the new projects and what people are saying about them. Even if the projects aren’t interesting to you as a backer, I would recommend clicking on most of them to learn what other project creators are doing. See what works and what doesn’t work, and make notes about any innovations you see. Also, if you’re in Europe, you should subscribe to this geeklist by andvaranaut.

5. Interact, but Pick Your Battles: As I mentioned in #2, by subscribing to all of your own content, you can essentially read everything anyone says about you on Kickstarter. This is great, because it provides a way for you to interact with tons of people and to be really proactive about answering questions. It can also be a great way for you to learn to respond to constructive criticism without being defensive, or even when to “pick your battles” and not say anything at all. People need to feel free to discuss your game in an openly constructive manner. These are things I’ve learned over time, and I’m still learning them.

I’m not talking about when someone doesn’t like your game and they have some negative things to say about it. That’s perfectly normal, and hopefully those negative things are constructive. I’m talking about mean-spirited cruelty that has no place on such a welcoming environment as BGG. If you read every comment, you will experience this at some point, and if you’re anything like me, it will really shake you. You will be shocked that someone would go out of their way to feel or express that level of hatred.

So, for your own sanity, when you encounter a truly cruel BGG user, block them. Don’t respond, don’t linger on the comment–just block them. It’s in the drop-down menu next to their name:

6. Geek Gold and Microbadges: Like the geeklists I posted above, there are some BGG users who spend a lot of time creating incredibly helpful resources on BGG. You should reward those users with more than just a thumb or a comment–you should give them Geek Gold. I’m still learning about Geek Gold, so feel free to fill in the blanks, but from what I can tell, Geek Gold is a currency earned by participating on BGG (uploading images, etc) that you can spend on microbadges.

Microbadges are the little icons below your avatar. I’ve been told by more experienced users that it’s important to maintain and update these badges over time. You can buy them by going to the “My Geek” tab near the top of the page, and you can earn more of them over time for free based on your level of participation. 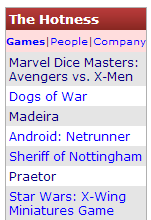 7. The Hotness. Every game designer wants to see their game on the ever-present Hotness list on the left sidebar.  These are the most talked-about games on BGG at any given time. How do you get on the Hotness? Nobody knows the exact formula, but it’s likely a combination of every form of participation on BGG (searches, comments, geeklists, images, thumbs, etc). I have noticed an almost direct correlation between Rahdo Runs Through and the Hotness…maybe it’s a complete coincidence, but after watching a Radho video, I often go to BGG to learn more, so perhaps there is a connection.

So what should you do as a project creator to get on the Hotness (other than sending your game to Rahdo and other reviewers)? Find ways to get people talking about your game on BGG. Post images on a regular basis. Encourage conversation as a moderator and a participant. Drive external traffic to your BGG page. A lot of this is out of your control, but do what you can to get that visibility on BGG.

8. Ratings and Rankings. Before and during your Kickstarter project, some of your playtesters might rate your game on BGG (the easiest way to do this is to search for a game and then input your rating among the search results). That’s very nice of them, but I would discourage it. Your playtesters haven’t really played the game–they’ve played a prototype of the game that probably looks and feels (and plays) very differently than the final version.

However, once the game is released, you definitely want people to rate your game. The more people who rate the game, the better your visibility on the BGG rankings. BGG dilutes your game’s ratings with a bunch of subpar ratings so that you won’t have the best game on BGG if three people give it a perfect 10. So the more people who rate your game, the less those diluting ratings will impact the game.

My recommendation is that you encourage people to rate your game through project updates from time to time. Make sure to be clear that you want honest ratings–don’t try to play the system. Also, keep in mind that some BGG users (perhaps the type that you will someday block) will rate your game really, really low. You know your game isn’t a 1 or a 2 out of 10, so don’t burden yourself by looking over individual ratings. For example, Terra Mystica, the #6 ranked game on BGG out of all games, has been given the lowest score of 1 by 37 BGG members!

Here’s the chart from the BGG wiki explaining how to rate games:

9. Blogging. You can create and subscribe to blogs on BGG, like this fantastic blog about solitaire games from the designer of Viticulture Automa. The ongoing debate I’ve had with several people is: Should you blog on BGG, on your own blog, or a little of both?

I don’t think there is a right answer, but I’ll say this: If you’re trying to start a company, you want to drive people to your website through search engine optimization, and one of the ways to do that is to build up a wealth of content on your website. BGG will not help you with that at all. So if that’s important to you, blog on your own website and occasionally link or post entries to BGG to encourage a diversity of participation.

10. Read the News. BGG does a fantastic job of reporting on everything related to tabletop gaming in the News section of the home page. Read it every day, and if you have news worth sharing, contact the moderators on BGG to let them know. 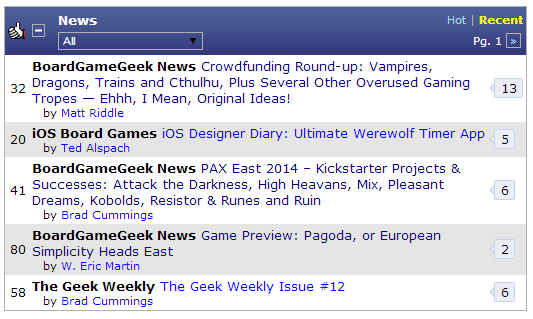 I’m sure I’ve missed something big and important, so please fill in the blanks in the comments. Thanks!

61 Comments on “Kickstarter Lesson #94: The Top 10 Ways to Survive and Thrive on BoardGameGeek”