I have a few quick links, videos, and Kickstarter innovations that I’ve been saving up, so I thought I’d consolidate them on today’s post with some commentary from me. 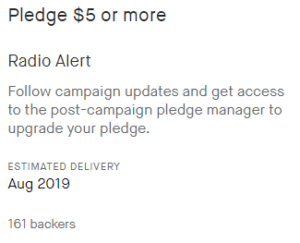 War of the Worlds $5 Pledge-Manager Reward

With an increasing number of backers pledging $1 to gain access to a project’s post-campaign pledge manager, Grey Fox Games took an interesting approach with their current project: They charged $5 instead.

I think this is an interesting approach to the perceived problem (as I wrote about here, I’m not sure it’s a problem for most creators). I think the result is that they have more confidence that the backers of this reward will later upgrade their pledge, and I’m curious to see if the data backs up that hypothesis in the long run.

Fellow creator Ed Baraf has a YouTube channel on which he talks about games but also discusses various business-related topics and interviews people in the game industry. If you’re a creator, I highly recommend subscribing to his channel.

The latest video hits close to home, as Ed chats with Mike Pascal of Peachstate Hobby, one of the nicest and smartest people working in the game industry, about what happened recently with Wingspan. While I don’t agree with everything they said, I appreciate that they offered their perspectives on that situation. Skip to around minute 24:00 if you want to get to the Wingspan content.

Hype, Overhyped, and Living Up to the Hype

You may know from blog entries like this and this that “hype” is one of my least favorite words. Despite those blog entries, though, I’ve never explained my reasoning as anywhere close to as well as Rodney (Watch It Played) did in the video below. He happened to use my game, Scythe, as the example for this video.

I think that Thundergryph Games is an industry leader at social sharing. Their method make people feel good about spreading the word.

For their latest game, Iwari, they seem to be using a service called Gleam to encourage different types of sharing. It’s very clean and easy to use: All it requires is a few clicks, and for being as simple as it is, each option is surprisingly engaging. You can see it in action here (the following is just a screenshot).

If Gleam is as easy to set up as it is to use, I’m very curious about using it in the future. I don’t even really care about the contest element–I just like how all of the social elements are consolidated. 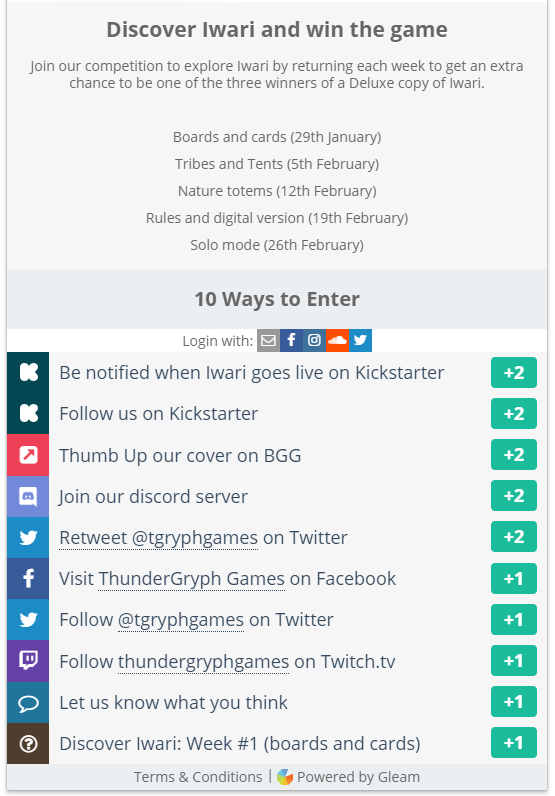 Mike Minutillo of Kick the Table recently posted a great video that looks back on 2018 tabletop games on Kickstarter. I’m really impressed by the depth of his analysis–he must have spent quite a bit of time putting together this data.

I’d love to hear your thoughts in the comments about these videos and techniques!