Kickstarter Retrospective #2: What You Can Learn from Paradise Fallen

Patrick had an interesting experience with Paradise Fallen. Despite having other successful Kickstarter campaigns and a solid fanbase, Paradise Fallen stumbled out of the gates. In fact, it had barely reached 50% funding with 48 hours to go. Fortunately, the project funded at 103% (those last two days can be big), but it was a close call.

As a result, Patrick offered to share some of his insights from the experience so you can learn from his mistakes. I really appreciate that he took the time to write this. 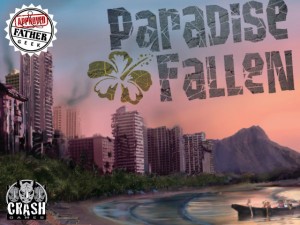 It’s an understatement to say that there are a million details that go into a Kickstarter Campaign. Anyone who has run a Kickstarter Campaign will tell you there are things that you are bound to miss. Some things are easily correctable right on the spot while others are not so easy to fix and risk taking momentum and more importantly potential funding out of your campaign.

This post is a debrief of my recent Kickstarter Campaign for Paradise Fallen and while it was successful it really took its toll on me. Hopefully I can learn from these mistakes and potentially help others from making them.

Complacency is a dangerous thing and having run three successful Kickstarter Campaigns I ran the risk of becoming complacent. I am a humble person and I refuse to ever assume future success on a Kickstarter Campaign. With the exception of Dungeon Heroes (which now belongs to Gamelyn Games) I’ve had to scrap for every single dollar on all three of my four campaigns and I’m okay with that. I’m okay with being the “Oliver” of Kickstarter. “Please Sir can I have one more pledge?” I don’t know what it’s like to have a project that funds on day two and over funds in such a way that it will offset costs on the next project. I am 100% okay with this. At the end of the day the goal has and always will be to simply get the game into people’s hands and onto their tables to enjoy with their friends and family, everything else isn’t nearly as important.

With Paradise Fallen I had upped the stakes quite a bit by having more riding on the project then I’ve ever had before. I had an outside designer for the first time and I had thousands of dollars of my own money earned outside of Kickstarter invested into the art and graphic design for the project. Mistakes needed to be avoided at all costs, yet I still made some big ones.

This mistake was a calculated risk that I took due to the fact that Paradise Fallen was re-themed to its current theme. I didn’t want to film a game play video with the old cards and confuse backers. Furthermore I had made some changes to the game that would have made the video even more confusing. While the art was done, the graphic design was not so I wasn’t able to make prototype decks up yet.

What I should have done – Delay project until I had a prototype deck to film with.

What I did – Pressed on and put an incomplete project on Kickstarter.

Mistake #2 – Not sending review copies out and not having exposure at a major convention.

This was my biggest bonehead mistake and it really was derivative of Mistake #1. It was very easy to not send out any review copies when I didn’t have any prototype decks. I knew Paradise Fallen was awesome, that was enough right? It didn’t matter how awesome I thought Paradise Fallen was. It didn’t matter one bit when I hit that launch button. I had played it with some people that are really involved in the Board Game Community and they enjoyed the game so I thought that I could get away with this due to my previous success and my brand awareness. This is where complacency snuck its ugly little head in. As I type this it really baffles me how on earth I thought people would have any idea that Paradise Fallen was a game worth their hard earned money. Due to my 2012 Production Schedule, Paradise Fallen wasn’t slated to be at a convention. I still don’t feel that this is 100% necessary but it is certainly helpful and until I build up enough trust with the Crash Games name and brand it might be very necessary.

What I should have done – Delayed the project until I could send out review copies. Possibly delay until after the game received good exposure at a major convention.

What I did – Not give my customers enough of a reason to support Paradise Fallen and not put my product in front of objective third parties.

Mistakes #3 – Not properly price the base price for Paradise Fallen.

I used to manage a retail board game store so this is probably the most embarrassing mistake that I made. I’ve seen games come into my old store multiple times a week so I got really used to knowing about what someone could charge for a game and whether or not it would sell well at a specific price point. When there is an emotional attachment to a business decision it can be difficult to look at that decision objectively. Pricing a game is difficult when you’ve poured so much effort and energy into a project. I still think $25 is a good value for the game but $20 seemed to be a much more successful price point for Paradise Fallen on Kickstarter. When your customer speaks you MUST listen.

What I should have done – Spent some more time objectively thinking about the proper price point and seeking out the opinion of more industry experts in setting the price point.

What I did – Let the wrong numbers and emotions guide my decision.

At the end of the day it is important to me that people know I’m human and I’m going to mess up sometimes. I will always own it and I will always do better. I didn’t get into making board games for money or notoriety. I got into making games because I have bared witness to the transformative power they can have in people’s lives and I have seen the positive impact they can have in some situations where a “fix” is so very difficult to find. I know they have enhanced my life and I’ve made some amazing friends along the way. I want to help families connect in ways they didn’t think possible. I want to be a conduit for the power of play. It is through people supporting Crash Games that I hope to be able to continue doing just that.

Quite some time ago I had an instructor give me some sage advice while I was learning how to be a plumber. He said, “You will learn far more from doing something wrong than you ever will from doing it right.” Let me just say you only incorrectly uninstall a gas water heater once. I can’t help but think about my instructor’s advice perpetually throughout my life. I am going to make mistakes until the day that I die; that is inevitable. How I chose to respond to these mistakes and what I learn and apply for them will define how much I respect the lessons.

8 Comments on “Kickstarter Retrospective #2: What You Can Learn from Paradise Fallen”