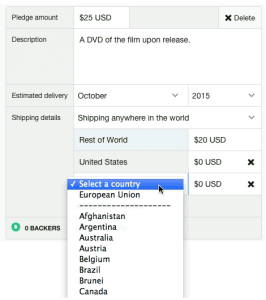 In a huge move, Kickstarter made their reward shipping options WAY more flexible yesterday. You can read all about it here on the Kickstarter blog (and see a gif of the new reward setup in action), but the gist of it is that you can now associate different shipping fees with any country on a reward-by-reward basis.

Why is that awesome? A few reasons:

Could it be better? Sure. Clearly the option of “European Union” is misinformed–it’s much more expensive to ship to Central EU than Western EU. And because these shipping options are associated with each reward level (not the entire project), you might have to spend a lot of time setting them up if your project has lots of rewards. Perhaps that’s a good thing, though, as many creators might benefit from having fewer rewards.

Some people in the comments are clamoring for Kickstarter to now separate shipping fees from the funding goal, which is an interesting proposal. I see their point for certain products (if you need to manufacture a minimum quantity of something, your funding goal should be based on that quantity plus other expenses), since you don’t know exactly where your backers will come from. But I think you make build a pretty close estimate into your funding goal.

Last year after I delivered Euphoria to backers, I wrote a post about the shipping process and things I learned from it that other creators could apply to their projects.

In that post I talked about a fulfillment company in China called 4px that I had used to send Euphoria to backers in Asia and Australia. As I noted in the post, overall I was pleased with their service, but “the 4px warehouse did not follow my instructions to put padding around the games.”

That was obviously a big concern going into my Tuscany project. Before I launched the project, I talked to 4px multiple times about adding bubble wrap or bags of air around the games, and they assured me every time that the games would be properly padded. I was confident in them.

I recently shipped out 20 early copies of Viticulture via 4px. Here are a few examples of how the games arrived to backers: 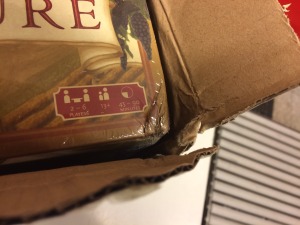 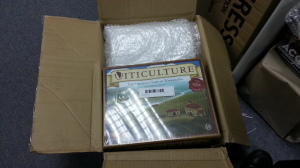 The second one made me both chuckle and cringe. They just stuffed a bunch of bubble wrap on one side of the box! With that much bubble wrap, they could have wrapped every game in that box several times over. But they didn’t. And they’ve lost my business.

It also doesn’t help that their communication has significantly decreased. I worked with a customer service rep named Cindy last year, and she was a pleasure to work with. However, Cindy moved on, and it hasn’t been the same.

I’m telling you this not because I feel good about bashing any company or individual. I’m telling you because even though I try to be very careful to vouch for the services I recommend on this blog, clearly I failed you in recommending 4px. I’ve left the mention of them on the old shipping entry, but I’ve added a big disclaimer to let people know about my concerns.

In the meantime, I’ve been trying to find other solutions, and I have a few in the works that I hope to be able to vouch for after using them to ship the Treasure Chest and Tuscany. The one I plan to work with is called Agility, which was mentioned to me by fellow creator Ed Baraf. My contact there is Chagall (CAChen@agility.com). Again, this is not yet an endorsement of Agility.

Are you as excited about Kickstarter’s new flexible shipping options as I am?