Kickstarter vs. Indiegogo: Which Crowdfunding Site Should You Choose?

Is Kickstarter still the king of crowdfunding?

You may notice that I write considerably more about Kickstarter than any other crowdfunding website, but I try to give its main competitor, Indiegogo, a nod every now and then.

Sometimes I wonder if I’m not giving Indiegogo the credit it’s due. So recently when I learned that accomplished crowdfunder Chris Morey was launching a new campaign on Kickstarter after running his last few campaigns on Indiegogo, I asked him to compare his experiences with both platforms so you can choose the one that fits you best. Thanks Chris!

After we felt confident and prepared, we launched our Kickstarter campaign for Black Labyrinth Book II by Joe R. Lansdale on October 8th 2013. The campaign lasted 34 days and ended on November 10th, reaching $30,323 (surpassing its goal amount by $5,323) and expanded beyond four B&W interior illustrations to include eight color interior illustrations instead. 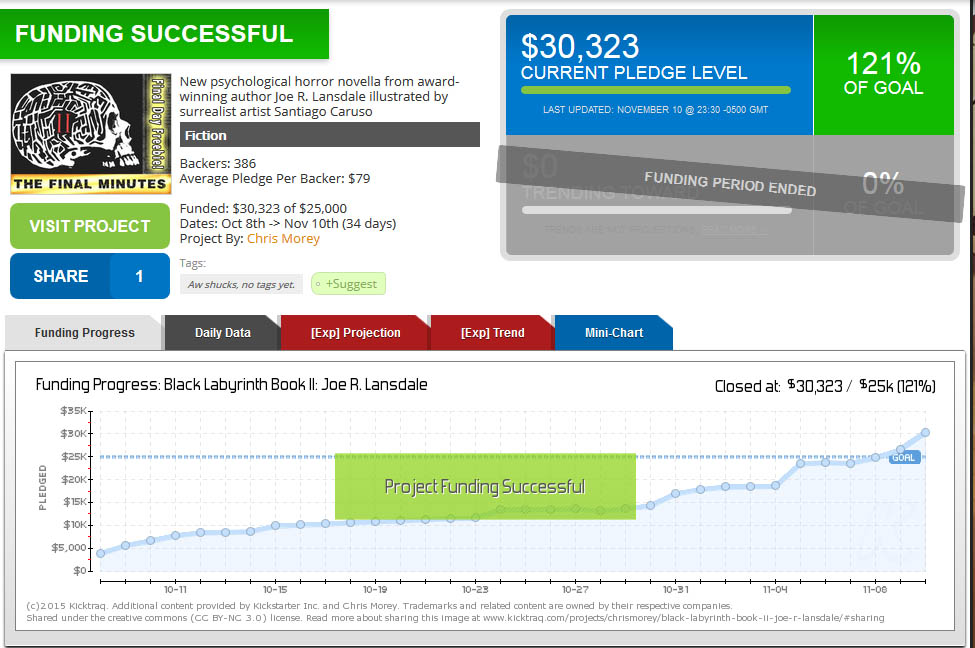 So far we have four successful crowdfunding campaigns under our belt: three on Indiegogo, one on Kickstarter and we’re currently running another on Kickstarter as well for I AM THE ABYSS. Most serious creators consider these major options before launching their campaign, and I’m here to shed some light on the pros and cons of both platforms to help make the choice a little easier.

Flexible Funding Option: this allows you to keep the funds collected even if you don’t reach your goal amount by your campaign end date. Unlike Kickstarter, this means you can raise $20,000 of a $25,000 goal and still keep funds, which under certain circumstances can be a relief or at least a safety net for creators of certain projects. We launched all three of our Indiegogo campaigns with Flexible Funding because after you reach your funding goal in a Flexible Funding campaign you end up paying the same fee structure as Fixed Funding. In other words, the only reason you shouldn’t do Flexible Funding is if you 100% need every last penny of the goal amount to create the project.

InDemand: Indiegogo recently launched a new tool for creators called InDemand. This allows you to continue to offer your product/service through your Indiegogo campaign page indefinitely as another retail outlet. This is particularly useful because so much time and effort is put into promoting your crowdfunding campaign that traffic still steadily trickles into the page well after the campaign has concluded. InDemand opens up the possibility of many more customers and is well worth exploring for applicable projects.

Shipping: this was also a Kickstarter con until recently, but on Indiegogo you still have to say “Please add this much additional for shipping outside of our home country.” The problem is, it costs different amounts in postage to ship to different countries. From the United States, for example, it’s much cheaper to ship to Canada than it is to Australia.

As a result, if you’re running a campaign with multiple Perk/Reward levels and shipping internationally, it’s a good idea to create a shipping chart so that international customers can see exactly how much in funds they’ll have to add for their respective Perk level. You’re going to have international customers who forget to add additional money for postage, so prepare to e-mail them after the campaign is over to request the funds outside of Indiegogo.

Internal Messaging System (Lack Thereof): Unlike Kickstarter which has its own internal messaging system with a database so you have logs of your conversations dating back years, on Indiegogo their “messaging system” is actually just the message being sent to the creator’s e-mail.

If you want to respond you need to either a) respond directly from the creator’s e-mail which is much more convenient but may not be ideal or b) look up the funder’s e-mail to respond to them from a different e-mail address. It’s a real hassle and a big con about Indiegogo. As a somewhat fix, we’ve been stressing to our Indiegogo campaign backers to use our support e-mail addresses instead.

Reward Level Limit: on Indiegogo you have a maximum of 20 reward levels while on Kickstarter you can have over 50 (tested over 50, limit unknown). While 20 reward levels should be enough in most cases, there are some instances when having a lot of reward levels is advantageous.

For example: I have found that customers are more likely to purchase something through a Reward (Perk) Level than they are to follow the instructions on your campaign page to purchase the same item as an Optional Add-On. This is partly because the Perk levels are easy to see on any platform, including mobile, while reading text on the campaign page with instructions on how to add extra funds to purchase an Add-On can sometimes confuse or exhaust the potential customer.

Crowdfunding platforms still have yet to make Add-Ons integrated into the checkout process of their platforms (which is another sorely overdue upgrade). An example of when having more than 20 Reward Levels on Kickstarter might be advantageous is selling original artworks to help fund an art book or individualized/very limited creative rewards.

Traffic/Audience: Kickstarter is essentially treated as a root word of crowdfunding because it is still the flagship platform for crowdfunding a project. According to the traffic studies that I’ve seen, Kickstarter.com gets about 300% the unique visitors as Indiegogo.com does on a monthly basis.

Shipping: A recent (and sorely overdue) upgrade to the Kickstarter platform is the ability to integrate international shipping rates for each country individually for each reward level. Indiegogo still requires the creator to spell out “Please add this many additional postage funds for shipping to this country at this reward level” and rely on the campaign backer to follow the instructions correctly.

Fixed Funding Only: You better hit your funding goal, because $25,000 out of $30,000 ain’t gonna cut it. On Kickstarter there is no Flexible Funding option as there is on Indiegogo. If you don’t reach your funding goal all of the contributions are refunded back to the campaign backers.

Autoplay: Kickstarter temporarily stopped their autoplay experience, but it’s back again. Jamey already outlined why this is bad for backers (and 97% of backers and creators seem to agree).

So Which Is It, Kickstarter or Indiegogo?

Both platforms are excellent resources for creators looking to get their projects funded. While we’ve had three successful Indiegogo campaigns in a row, one Kickstarter campaign and one currently in progress, I still think I’ll have to give Kickstarter the slight nod. With the significant amount of extra traffic, the new update that includes international shipping rates per level per country and the general buzz-friendly nature of Kickstarter, I would give it the nod as the slightly better platform for most projects.

Best wishes on your journey to launching a successful crowdfunding campaign. Remember: limit the amount of your add-ons, under-promise and over-deliver, make sure to crunch the numbers in excruciatingly detailed ways before you launch your campaign… and good luck!

If you’re interested, the Kickstarter campaign for our anthology project, I AM THE ABYSS, is currently live on Kickstarter.

If you have any questions for Chris or want to share other comparisons between Kickstarter and Indiegogo, please post in the comments!

26 Comments on “Kickstarter vs. Indiegogo: Which Crowdfunding Site Should You Choose?”