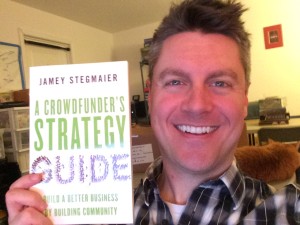 Jamey has run 8 successful crowdfunding campaigns, raising over $3.2 million from over 36,000 backers. His 4 most successful campaigns are in the board game category:

Jamey shares his insights and mistakes on his Kickstarter Lessons blog, which is read by thousands of crowdfunders from a wide variety of categories.  He is extremely passionate about making crowdfunding a better place for creators and backers.

Jamey has a BSBA from Washington University in St. Louis and continues to live in the area. He currently has two cats, Biddy and Walter.

If you would like to be notified when the book is published, you should sign up for the monthly e-newsletter here. It is available for pre-order on Amazon.

2 Comments on “About the Author”