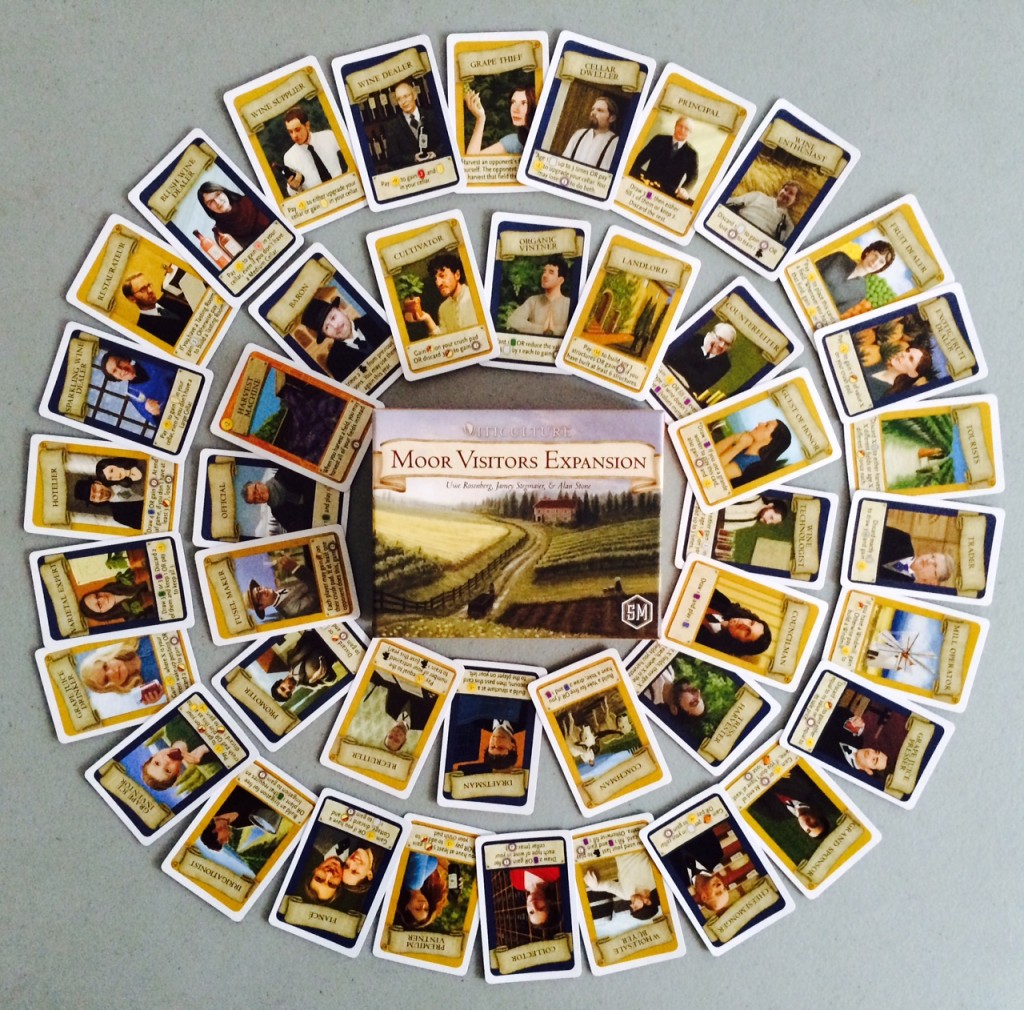 Let’s talk about The Great Shipping Debacle of 2016.

The story starts with my original post about the special pre-order campaign for Moor Visitors, an expansion to Viticulture. During the last week of February, we accepted pre-orders for Moor Visitors and a few other incoming/in-stock products from retailers, and those retailers sold to their customers and to the various customers we referred to them. I detail this process here, and part 1 of my conclusions is here.

Overall, the campaign went great and received overwhelmingly positive feedback from customers and retailers. We sold 4,440 copies of Moor Visitors in a one-week period, about 30% of the overall revenue from the campaign.

However, there’s a dark side to the story regarding shipping. It comes with no small amount of embarrassment on my part, because…well, shipping is what I do. I built this company on our shipping method, which has since been replicated by hundreds (maybe thousands) of other creators.

This post isn’t meant to point the finger at anyone (including myself). Rather, it’s to show you the various types of things that can go wrong in shipping and how you can avoid them. Enjoy my misery below! :)

One of the big ideas behind the Moor Visitors campaign was to announce a product and make it available to customers almost instantly. We printed over 5,000 copies of the expansion and put them on a boat from China to St. Louis with reprints of Viticulture and Between Two Cities about a month before we launched the campaign. This was in stark contrast to all of our Kickstarter campaigns, where production didn’t begin until several months after the campaign.

Now, usually when we ship rewards, we send 6 different shipments from China: One to each of the fulfillment centers we use, and one to our distribution broker’s warehouse in St. Louis. I’m able to do this because I know exactly how many copies we need for each region.

For Moor Visitors, I wouldn’t know how many copies we needed for each region until the pre-order campaign. I figured it would be a pretty small campaign, with maybe a few dozen retailers signing up, so it would be easy to just have the St. Louis warehouse ship to them. The warehouse confirmed that wouldn’t be an issue.

Also, the St. Louis warehouse contains our in-stock inventory, so by consolidating everything in that one location, I could sell both our incoming products and our inventory directly to retailers.

A few days before I launched the campaign, I confirmed with my freight shipping company that the cargo was on schedule. Based on that schedule, here’s how everything should have worked out:

Sure, the schedule was a bit optimistic. But at the time, I had every reason to think this was accurate: The shipment was on time, the warehouse was ready to handle the shipments, and they were only sending out a few dozen shipments. What could possibly go wrong?

I launched the campaign on Monday, February 22, revealing the above schedule to both retailers and our subscribers. Four hours later I got an e-mail from my freight shipping company informing me that the ocean freight shipment–which was supposedly getting close to port–had been delayed and wouldn’t arrive until March 10 at best.

That was a big blow. Yes, it’s only 10 days, but just four hours before that I had set the expectations of our 20,000 subscribers. It’s not a good way to start off a campaign, especially one based on near-instant fulfillment.

But that’s okay. I informed retailers of the change, and I updated the project page on our website.

The shipment arrived on March 11. There were two floor-loaded shipping containers (floor loading lets you fit more cartons into a container than pallets). Because they were floor-loaded, they took much longer for the warehouse to unload–they ended up taking an entire week just to unload them (during which time the trucking company charged us–as they should–for having their container sitting at the warehouse). In the future, we will be palletizing shipments to that facility.

I sent over the fulfillment spreadsheet to the warehouse. The campaign went better than expected–instead of a few dozen retailers, there were 125 of them. Still, that’s far fewer than sending out 4,440 individual shipments. I didn’t think that would be a problem.

Well, it was a problem. The warehouse informed me that it would take 4-6 weeks to complete fulfillment of those shipments. The root of the problem was that the orders varied greatly in size, with almost all of them having multiple SKUs. There was no way to automate the process.

4-6 weeks was much too long. Also, with the number of orders we received in Canada, Europe, and Australia/NZ, we were better off shipping a few pallets to fulfillment centers in each of those locations than to fulfill them individually from St. Louis.

Fortunately, the fulfillment center we normally use for US shipments, Funagain Games, offered to take on the US/Asia portion of fulfillment on short notice. So I had the St. Louis warehouse ship a bunch of games over to Portland. Then I had them air freight a few pallets to Europe, Canada, and Australia/NZ.

The shipment to Funagain took to pack and transport, but it finally arrived on March 30. Incredibly, they managed to ship out everything by April 4. Those games were going to retailers in the US and Asia, not customers, but at least they were on their way. Customers would end up getting their games in mid-April, about a month after my original estimate.

This isn’t really a “thing”–I just wanted to point out how awesome Funagain’s fulfillment service is.

Before I calculated the size of the shipment to Europe, I reached out to our fulfillment center in France, which doubles as a distribution facility. They had some games in stock that we had previously sold to them–namely, Tuscany and Viticulture Essential–and I offered to buy those games back from them so I could reduce our air freight shipment to 2 pallets.

The distribution facility agreed to this, resulting in a very precise calculation on my part to ensure that we sent enough games to Europe.

The air freight shipment got hung up in French customs for a few days, but it finally got through and made it to the warehouse on Thursday, April 7. I had sent the warehouse all shipping information in advance so they could prepare boxes and labels. However, instead of shipping out on Friday, it wasn’t until Tuesday that they shipped anything.

I received their fulfillment report on March 12. There was some bad news: Remember those copies of Viticulture I bought from them so I wouldn’t have to air freight them from St. Louis? Well, they sold 88 of those games while the shipment was in the air. So I was 88 copies short.

Fortunately (?), those copies were consolidated between three big retailers in the EU, so I contacted them, informed them of the issue, and told them I would be resolving it ASAP (and including some extra copies for free). I had our St. Louis warehouse ship another pallet of Viticulture to France, which arrived and were finally shipped to those retailers on April 25.

In the end, our attempt to save about $440 on those copies of Viticulture ended up costing us over $1800.

This brings us to Australia/NZ.

Similar to the EU shipment, our St. Louis warehouse sent a pallet via air freight to our fulfillment center in Australia. They arrived at customs in late March…and sat there for a week. Apparently one of the numbers on the invoice didn’t match the number on the customs form. It was a typo, but Australian customs draws the line at typos, because they sent the shipment back to the US.

It finally arrived at the fulfillment center on April 18, where it sat for about a week until the shipments were sent out to retailers on April 27. Those retailers have been receiving them over the last few days.

Remarkably, the retailers have been incredibly patient and understanding. Perhaps this is because I kept them informed along the way, and that they appreciated being put first for the pre-order campaign. They really have been great.

But I will definitely do some things differently next time. I created the potential for too many of these mistakes–most of them were avoidable.

What I’ll Do Next Time

The next expansion we release will most likely be the Tuscany Essential Edition. We’ll be making it at the same time as print runs of Viticulture and Moor Visitors, so those are the three products I’ll offer to retailers.

As we’re wrapping up production, we’ll run a pre-order campaign pretty much identical to what we did for Moor Visitors. We’ll then use that data to ship ocean freight directly from China to our 5 fulfillment centers (and the extras to our St. Louis warehouse). I won’t rely on inventory at those fulfillment centers, and I won’t try to deliver to customers within a few weeks of the campaign–I’ll build in a proper buffer.

Based on that method, the shipments should still arrive at retailers about 5-7 weeks after the campaign ends. I’ll estimate 2 months just in case, which is still much faster than on my Kickstarter campaigns.

I learned a lot from this experience, and I hope it was helpful for you to read about my mistakes. If you have any observations I overlooked, please share them in the comments.