Can you name a Jeopardy contestant?

Back in 2014, after Jeopardy lifted the limit on the number of consecutive appearances for a contestant, Jennings won 74 consecutive games. I didn’t know that number off hand, but I knew it was a lot.

Records are memorable. Today I propose that streaks also matter. They’re memorable and motivating. And they might be helpful for Kickstarter creators. 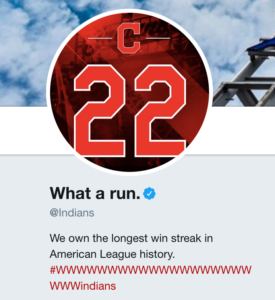 If you look around (or into your memory), streaks are everywhere, most often in sports:

There’s something very satisfying about keeping a streak alive, whether you’re actively participating in the streak or if you’re a spectator. Kickstarter is a sweet spot where backers are both participants and spectators, so I’ve wondered for a while now if projects could benefit by emphasizing streaks.

The streak could be displayed as part of the project image, which wouldn’t take long to update every day. Creators could monitor the progress of the streak themselves, or they could use the data on Kicktraq.

It might be best to start the streak mechanism on Day 3, after the initial bump. That should give you a sense of what a “normal” day looks like.

What’s the point of all this? Part of it simply to make your backers feel good. I’m all for anything that makes existing backers happier with their choice to back the project. And the other part of it is a subtle call to action: Backers have the power to share the project and increase their pledge, so a streak may compel them to take action without you needing to say anything. It gives backers a rallying cry beyond just the funding goal and stretch goals.

I’m curious if a creator has ever tried something like this. If not, if you’re a creator who decides to try this, contact me a week into your project to tell me how it’s going and I’ll talk about it here on the blog.

If you have any thoughts about this, I’d love to see them in the comments!