Live-Blogging Lesson #8: The Feeling of Running a Mega Project

It’s odd to label my own project, Scythe, a “mega project,” especially while the project is live (heck, it’s only day 6!) It’s odd because it feels self-congratulatory even though it really, truly is not. It’s odd because in the past I’ve written about mega projects from the outside looking in instead of the other way around.

Particularly, it’s odd because what I write about here probably won’t apply to the vast majority of creators. But I think at some point we’ve all probably hoped to be the creator of a project that really blows up, and I’d like to give you the inside scoop of how it feels. 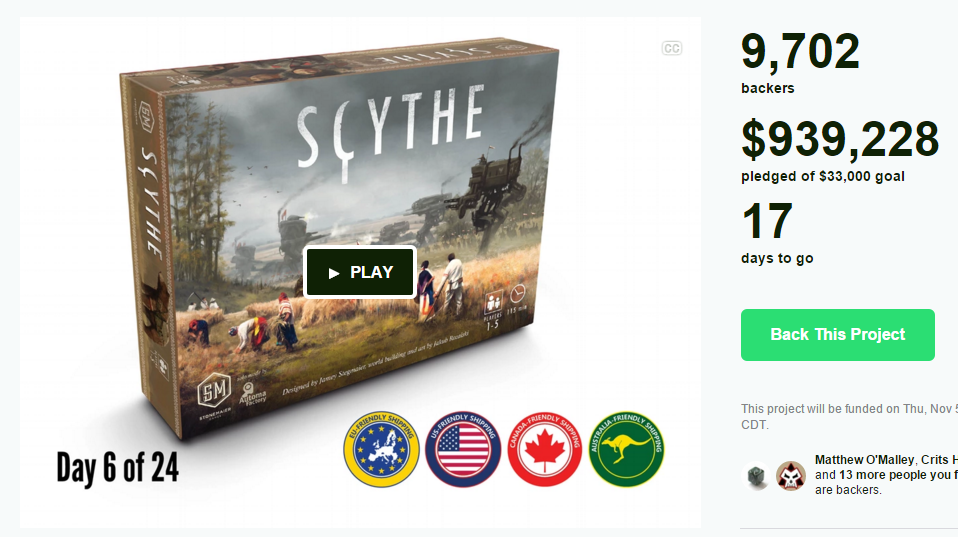 Launch day was a whirlwind of activity from the moment I pressed the “launch” button. We had a funding goal of $33,000, and the project funded in 2 minutes and 45 seconds (someone timed it–I was busy updating links on my website and moving my FAQ over to the project page). I don’t know the exact timing, but I think we hit all of our Day 1 stretch goals (up to $158k) in less than 30 minutes.

I was both elated and immediately overwhelmed with the magnitude of comments and messages on Kickstarter. Overwhelmed, but in a good way. It was very flattering to have so many people support the project right away without any early birds or exclusives–it said to me that they were genuinely excited about Scythe and wanted to support Stonemaier.

I probably did not look away from the computer screen for 2-3 hours straight. I honestly forgot to even go to the bathroom, which my bladder was not happy about.

When I snapped out of my daze due to hunger, I realized something: I hadn’t checked Facebook or BoardGameGeek the entire time. I simply didn’t have a spare second to do so. I made a decision at that point that I was just going to focus on Kickstarter for the first day and just skim–but not participate–on BGG.

As for Facebook, I didn’t even skim, as I quickly realized that something unique was happening there. The outpouring of support and enthusiasm for Scythe on Facebook by fans was being met with cruelty, aggression, and libel by a vocal minority. It was really sad for me to see a small number of people being so condemning of people who were excited about something. There even seemed to be some kind of conspiracy theory that I was behind all the activity on Facebook. I don’t even know what that means or what it would look like, but I can assure you that I don’t have the time, ingenuity, or desire to execute some sort of automated hype machine.

It didn’t feel good to see people treating me or each other that way on Facebook, so I just stayed out of it. I had plenty of other things to do on Kickstarter, and I spent the rest of my day doing them. I forced myself to finally switch off and go to bed around 1:00 am. I did not sleep well, and my cats didn’t care.

The second day was one of the most exhausting, defeating days I’ve ever lived through. Which is weird, because when we reached the 24-hour mark, Scythe had raised a monumental sum that far surpassed my projections:

I wrote the first project update, sent it out, and that’s when the horror began.

Basically, I tried a new stretch goal system (daily goals) that some people didn’t like. They really didn’t like it. To the extent that people threatened and bullied me. It didn’t feel good.

In hindsight, I know that those people didn’t feel good either. They felt like I was manipulating them, and they felt betrayed that I had based the Day 2 daily goal on the previous day’s total.

I knew that my intentions were good–I was trying to create a system of daily excitement and engagement–but as the comments piled up from a few hundred people, I also know that my intentions didn’t really matter. What mattered was that happiness of my backers. What mattered was that the conversation was dominating the comments to the point that they were no longer welcoming at all to people who wanted to talk about other things. That’s not the community-driven, inclusive environment I want to foster on Kickstarter.

Even as the funding total continued to climb, the day became harder and harder as those comments piled up (on Kickstarter and elsewhere–from what I hear, reddit was abuzz with it). I’ve never experienced clinical depression, but I think I got a glimpse of what it felt like on that day. It felt like the very air I was breathing was as thick as water.

You might be able to see the toll it was taking on me during my live video chat with JR Honeycutt, which happened that afternoon:

JR ended the call with an unrecorded pep talk that I really appreciated. That, combined with other people–many of whom were complete strangers, as well as my 2-year-old niece–contacting me with words of encouragement, really helped me get through the slog to see what I needed to do. It also really helped to have an amazing team of ambassadors who were able to help out in the comments (and who reminded me that the vast majority of backers seemed perfectly content).

That evening, before going to bed, I changed the system to a more traditional stretch goal model. Then I went to bed. Again I didn’t sleep well. Again, the cats didn’t care. 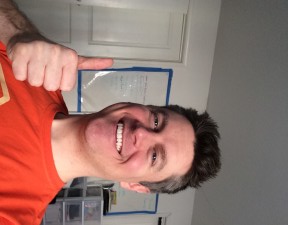 Day 3 was AWESOME. It was finally what I wanted Scythe to be. The conversation on Kickstarter was fun and light and sometimes constructive or questioning, but never threatening or antagonistic like the previous day.

I’m noting this because even if you have a project bringing in a ton of money, it may not feel successful or fun if you’re not accomplishing your true goal. My true goal on Kickstarter is always to create community, and Day 3 was when that really came together.

I did one other thing on Thursday that really helped. As of Day 1, I was already filtering cancellation notification e-mails so I never saw them. I determined a long time ago that they don’t benefit me at all to see–they’re just a punch in the gut every time. So I never see them.

(Sidenote for clarification: The ability for backers to cancel pledges is incredibly important, and it’s actually one of my favorite things about Kickstarter. There is nothing wrong with doing that. I’m just saying that as a creator, I don’t want to know about it when it happens. :) )

Day 3 was also the first day that I left my condo for the first time since launching the project. I took out the trash, soaked in the sun, then went back to work. I slept great that night. In fact, my Sleep Talk app recorded epic amounts of snoring, which means a deep sleep for me.

The last few days have been similar to Day 3. That doesn’t mean that everything is perfect–there’s still plenty of constructive criticism and probing questions, which are great, especially since they’re mixed in with tons of conversation about various topics with backers (6,048 comments and counting). I’ve also been able to pay attention and selectively participate in conversations on BGG, Facebook, and Twitter.

My experience is probably quite different than the experience of other creators who have seen their projects grow much bigger than what they expected. Or maybe we have a lot in common. I’m not sure this post can really help prepare another creator for running the first week of a mega project, but maybe it will give you some insight into the emotional and logistical roller coaster you need to be ready for.

Also, for backers who read this, perhaps it’s a small reminder that creators are people too. That doesn’t mean you shouldn’t hold us accountable or challenge us–we’re here to serve you. Our professionalism should be consistent whether we’re feeling good or bad. But it goes a long way when you treat us as human. At least, speaking for myself, I really appreciate it!

78 Comments on “Live-Blogging Lesson #8: The Feeling of Running a Mega Project”