I recently intended to feature the Meepillows campaign on my blog because I loved the project video so much, but I couldn’t find a good place to write about it. So when the campaign ended, I asked Will if he would want to write a 3 successes/3 mistakes postmortem, and thankfully he agreed! I’ll let Will take it from here:

As a brand new business startup about to launch my first Kickstarter campaign, I was sailing into uncharted territory. Even with all the knowledge I brought with me into this crazy endeavor I also realized there was a lot to learn! 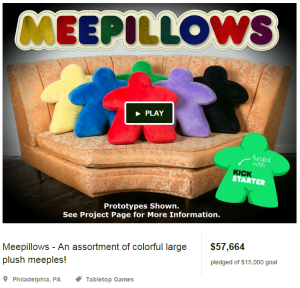 What I Feel I Did Right:

I’ve never been more nervous than the day I launched my Kickstarter, except for the day I asked my wife to marry me. Putting myself out there for the world to judge is an incredibly scary proposition. I was scared to fail, scared that I overlooked something important, and even scared that I would succeed.

There was a weird and wonderful feeling I had when the VERY first person backed my campaign. It was something I wasn’t expecting and it hit me. It hit me hard and continues to stay with me. It was an intense sense of responsibility, gratefulness, obligation, and connection all bound up in one new emotion towards each and every backer. I like to call it “Respobligratection!”

In every single Update I sent out, every post I made in the Comments section, and every person I Messaged I was truthful and sincere. If I didn’t have an answer, I got the answer. Sometimes the answers may not have been what a particular backer wanted to hear, but I had to suck it up and be honest.

This rang particularly true when it came to shipping costs. A few backers were not entirely happy about the pricing, but I laid out a clear shipping breakdown and explanation. For 99% of the backers that was all they needed. They were excited to help me succeed.

My Kickstarter campaign was for a meeple-shaped pillow called a Meepillow.

That’s it. Short and sweet.

This was a double-edged sword though. How do I promote such a simple idea?

It was important to me to capture my personality and inherent fun of the Meepillow in the project video. For me, a video that is funny, or sincere, or just full of real people can sell me faster on a Kickstarter project than any number of pre-planned stretch goals ever could.

So, to prepare for my campaign I watched a lot of Kickstarter videos to see what worked and what didn’t. I looked at previous campaigns that succeeded, and a bunch that failed. And I really looked at my product hard. Not necessarily as a creator, but as consumer.

I knew, without a shadow of a doubt, I needed to create a Kickstarter video that immediately grabbed the viewer. I wanted it to be informative, relevant, and most of all fun. I wanted it to not only represent my product, but even more importantly, me.

So, I quickly realized I had to think outside the box and not talk about what Meepillows simply were (a meeple-shaped pillow), but what they weren’t. And that was the key that unlocked the entire video for me. I could be as realistic, or more importantly, absurd, as I wanted to be. And what better way to convey absurd selling points than an infommerical? Thankfully, the video received a lot of attention and people messaged me daily commenting on their enjoyment of it.

Who Doesn’t Love a Contest?

Less than a week into my campaign I hit my funding goal. I truly couldn’t believe it. I originally intended to make my campaign short and sweet with no stretch goals. This immediately changed as the support for my project came flooding in. I wanted to give something more to my backers, but my budget was very tight. Instead of implementing Stretch Goals I started introducing ‘Thank You Goals.’

One of my ‘Thank You Goals’ was a backer-only contest I would conduct after the campaign ended – you could win a complete set of all 6 Meepillows. So, I created a survey on www.SurveyMonkey.com. The first 100 responses are free, but I opted into the subscription version for 1 month for $26.00 for unlimited responses. I asked two simple questions:

Since my campaign Reward Levels were based on quantity-discounted tiers, not color, this was a unique opportunity to have some gaming fun. I was able to absorb the minimal costs involved and keep the campaign uncomplicated which was very important to me as a first-time Kickstarter creator. The survey was simple, engaging and my backers appreciated the end-of-campaign game!

[NOTE FROM JAMEY: Kickstarter generally discourages contests, but their guidelines are vague. I’ve found that if the contest is completely open to any backer, it has a better chance of not getting your project red flagged. Just to be safe, check with Kickstarter before launching a contest during a campaign.] 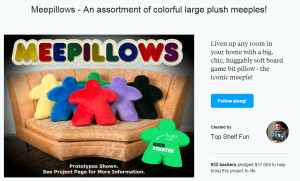 What I Feel I Did Not-So-Right:

I executed my campaign with 6 simple Reward Levels. There were 6 Meepillow colors to choose from, so you could order anywhere from 1 to 6 Meepillows (to make a complete set). The more you ordered the cheaper it was per Meepillow. Since I prefer simple Reward tiers more than complicated campaigns full of add-ons I followed this model.

In hindsight, what I did not account for was so simple it truly is ludicrous. I forgot to consider, “What if someone wants to order more than 6 Meepillows?” Well, turned out that was a popular question. I never even considered this when creating my Reward Levels. I could have never imagined that anyone would ever want more than 6 Meepillows. Well, there were a lot of people messaging me for this exact reason and my inbox became full of additional work.

I didn’t have the shipping logistics set up for this type of issue. Shipping 6 15” Meepillows in one box was complicated and expensive enough, I wasn’t prepared to ship 7 or more.

Our Friends Across the Pond and Beyond

For me, shipping logistics is the hardest part of running a Kickstarter campaign and a business. This is exponentially true when shipping internationally. Customs, VAT, and many other issues can bog you down and discourage you. This happened to me.

I decided early on to hire a fulfilment warehouse to handle all my backer orders. I researched MANY fulfillment companies until I decided to go with a company called Send from China (www.sendfromchina.com). Yes, there are numerous costs involved, but I knew that warehousing oversized product would be a serious issue and shipping would even harder. Hiring a fulfillment company was going to be great because it removed a lot of my logistics concerns. I could actually concentrate on running my company.

Fast-forward to Kickstarter Campaign Day 1. A flood of messages and comments came in asking if my project was EU Friendly. Shipping to the EU can cost your backers extra money. Shipping WITHIN the EU will cost you money, but not nearly as much, and is considered EU Friendly. I had a solid shipping plan, but wasn’t fully prepared for international demand. This definitely cost me backers.

As I grow my business post-Kickstarter, understanding and growing my business internationally is now a priority.

If you are like me, you will be running your campaign while simultaneously working your full-time job, maintaining your home life, and trying not to annoy everyone you know by constantly talking about your project. Some things will be put on the back burner. Google Analytics should not be one of them.

Kickstarter provides some interesting data when it comes to backer referral data. However, it could be a lot better. You get a general snapshot of where your backers are being referred from, how many backers, and a total amount of money they spent on your campaign.

Google Analytics is a tool that can provide you with extensive breakdowns of referrer data, as well as give you insight into traffic to your project page, overall conversion rate, ad campaign conversion rate, and more! Tapping into this data can help you better understand how your promotion efforts are paying off, and where backers are finding your project.

I really wish I had this data now. Which of my ads across all the various websites and social media platforms worked best? What campaign links were people accessing the most? What days am I getting the most traffic? What is the conversion rate?

Now, I will never know. This data could be extremely helpful if I were to launch another Kickstarter campaign in the future.

Thanks so much to Will for writing this post! If you have any questions for him, please post them in the comments.

3 Comments on “Meepillows: Mistakes, Maturations, and Musings (a guest post)”