My 3 Favorite Elements of the Leaders of Euphoria Kickstarter Campaign 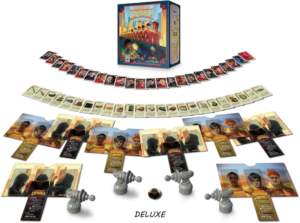 A long, long time ago, in a time called 2014, I reached out to a fellow game designer named Brian. He had designed one of my favorite social deduction/bluffing games, Good Cop Bad Cop.

At the time, my game dice worker-placement Euro game, Euphoria: Build a Better Dystopia, had been on the market for about a year, and I was interested in expanding the brand. So I asked Brian if he might be interested in designing a a Euphoria version of Good Cop Bad Cop. Brian agreed to give it a try.

Over the next year (while also designing several other games and running successful Kickstarter campaigns for them), Brian would work on the game for a few months, then send me a prototype to test out. I’d send him some detailed feedback, then he and his business partner (Clayton) would continue to improve the game.

However, as much as I was enjoying the game, I hadn’t committed to anything. Brian and I had discussed from the beginning that the game just might not be a good fit for Stonemaier, and if that was the case, Brian could just set it in a different dystopian world.

It was around January of 2016 when I realized I had to make a decision. My business partner and I sat down to discuss it, and we realized that our company had evolved into something we didn’t expect: We were running a company that primarily makes mid-weight Euro games. And we liked it that way.

So we talked to Brian about it, and we came up with the following solution: Instead of having Stonemaier Games publish Leaders of Euphoria, Brian’s company–Overworld Games–would publish it, and we would support it. It’s a decision that was aligned with both of our brands.

This is a long way of me saying that I have a strong, biased connection to Leaders of Euphoria. I love the game, and I’m so impressed by the Kickstarter campaign that Overworld put together for it. It launched 8 hours ago, and it’s already met its funding goal of $20,000. I hope you check it out.

My 3 Favorite Elements of the Leaders of Euphoria Kickstarter Campaign

This mash-up video is brilliant. I love that you can spend less than 2 minutes and get the key information from a number of reviewers. Some backers will use it as the only review, while others will using it as a stepping stone to delve deeper into those reviews.

Brian told me he originally saw this on one of the Stockpile Kickstarter projects, which makes sense, as Seth is another innovative creator.

If you read this blog, you know how much I love a thematic video that clearly communicates what the product is. This video, created by The Lowry Agency, does a wonderful job of accomplishing those goals. Even if you don’t normally watch Kickstarter videos, it’s worth checking out to learn from it. 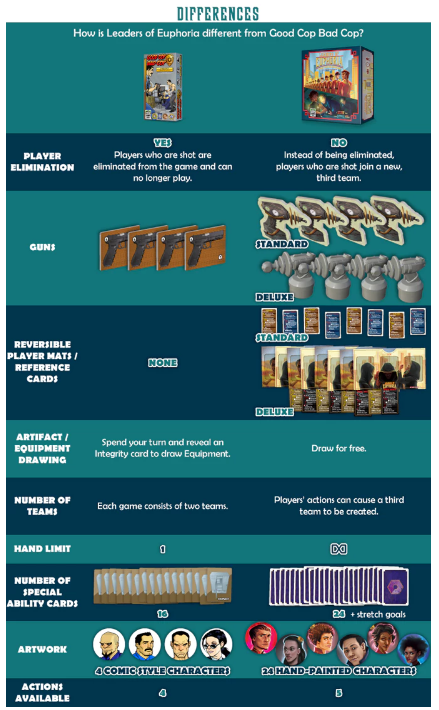 A key part of any Kickstarter campaign is answering questions before they’re asked. Brian wisely anticipated a big question: Is Leaders of Euphoria really any different than Good Cop Bad Cop?

So while I was scrolling down the Kickstarter page during my review of it, I was delighted to see the above chart. It does such a good job of answering that question in a concise, easy-to-parse way.

Even if you’re not interested in Leaders of Euphoria, I recommend checking out the project page, as it has a lot of great ideas to consider for your project. Here are just a few other things to keep an eye out for:

Is there anything about the Leaders of Euphoria project page I missed that you think is notable for other creators to consider?