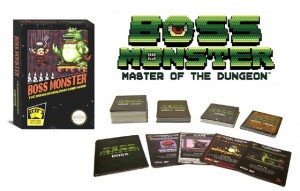 I mostly write Kickstarter-related entries on this blog at this point, but we are a board game company, so I’d like to write about games and game design from time to time. This will be the first entry of a monthly series in which I talk about my favorite game this month.

I stumbled upon the Boss Monster Kickstarter campaign last November. I didn’t research it as much as I should have, but I liked what they were doing, I liked that the game only costs $20, and I liked that it was really popular (4,689 backers). So I got a copy, and it was delivered back in June (only 4 months later than the expected delivery date…not bad!).

And then it sat on my shelf.

You see, I have a hard time getting excited about small games. Big, meaty games? Yes please. We must play those immediately. But small-box games? Even though it’s not fair to them, they often tend to sit on my shelf for quite a while before seeing play.

Plus, with Boss Monster, although I could see why the pixelated art and dungeon building could be appealing for many people, they didn’t intrigue me all that much. I couldn’t convince myself to let it hit the table over other games.

That’s unfortunate, because I was missing out on a great game in Boss Monster.

It finally hit the table last Wednesday at the weekly game night I host. One person had played before, so we only had to fumble through the rules a little bit. The entire game took about 40 minutes, and I won, but I would be writing this even if I had lost miserably. Because I had a blast playing it. Here’s why:

Now, I have one big caveat to mention: I’ve only played one game of Boss Monster. I honestly don’t know how deep the game will be upon multiple plays or if it will sustain the level of fun I had with the first game. I’ll keep an eye on that. All I know is that I currently want to play Boss Monster more than any other game. Except for Euphoria, that is. Advance copies of which will arrive just in time for game night this week…

Have you played Boss Monster? What do you think?

19 Comments on “My Favorite Game This Month: Boss Monster”