My Favorite Game This Month: Lords of Waterdeep 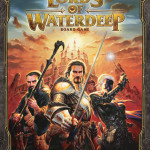 I first played Lords of Waterdeep, a Euro board game set in the Dungeons & Dragons universe, almost exactly 1 year ago at Geekway to the West. I thought it was a super boring cube-pusher, and I didn’t see myself playing it again.

I’ve played it more than I’ve played any other game over the last few months thanks to the iPad app (and once with the “real” version). My experience with Lords of Waterdeep during that time has reminded me that you really can’t judge a game after 1 play, even if that game has cubes in it where it should have custom tokens. It’s also a great learning tool for game designers, as I’ll describe below.

If you don’t know how to play Lords of Waterdeep, watch this episode of Tabletop, especially since Patrick Rothfuss is one of the guests.

Here’s why I’ve come to love and respect this game, and why I think every game designer should play it:

The more I play Lords of Waterdeep, the more I respect it as an exemplary example of worker-placement. I highly recommend the iPad app if you want to give it a spin, or if you’re attending Geekway to the West in St. Louis in 10 days, I’d be happy to teach you how to play.

The only qualm I have about the game (as alluded to earlier) is that I wish the cubes were custom pieces. I understand why they’re not–it would be easy for new players to confuse worker tokens and adventurer meeples, not to mention the additional expense–but they add a lot of flavor to the game when you play with them (the play-to-win versions of Waterdeep at Geekway have the custom meeples).

What are your thoughts on this game?

31 Comments on “My Favorite Game This Month: Lords of Waterdeep”