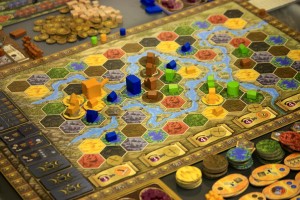 The last time I wrote about a game of the month, it was Boss Monster, a light, thematic card game.

Terra Mystica is a game about 14 different races trying to build up their civilizations in their own unique ways. It’s a heavy Euro game that isn’t fun to teach, but once people know how to play, it’s amazing. Here’s why I love it:

1. Constant Positive Feedback: I love positive feedback in games. You know that sinking feeling you get in certain games when you can’t feed your workers? It doesn’t have to be that way! Workers don’t need to be fed, silly! In Terra Mystica, everything you do is better than the previous thing you did. When you build something, you get new income every turn. When you upgrade you buildings, you get different types of income and more points. In fact, there are tons of ways to get points. Some might call it point salad, but I call it positive feedback.

2. Variability and Replayability: Man, the variability in this game is endless. The first level of this are the different races. Each race is very different from the others. I would even say that some are more challenging than others despite their overall balance (the Chaos Magicians are particularly difficult to use, but I’ve come close to winning with them twice). But the variability goes beyond that thanks to the upgrade system in the game. The order in which you build and upgrade (each of which affect your income) will be very different from game to game, so even if you play the same race twice in a row, the games might feel very different.

3. Player Interaction: Like many Euros, most of what you do on your player mat is completely independent of other players. But Terra Mystica isn’t a multi-player solitaire game due to a number of interesting mechanisms for interaction. The primary one is that building close to other players is both good and risky. The other players might end up blocking you, but they also might end up charging your magic/power when they build due to proximity. The system for selecting income bonuses at the end of each turn leads to interesting interactions (you’re trying to figure out when other players will pass), and the tech tracks (“cult” tracks) use an area majority mechanism that forces player interaction. None of the interactions are destructive, but you will inevitably cringe when someone takes the token you wanted or cheer when you beat someone else to a key territory.

4. Short-Term Goals: The more I play and design games, the more I appreciate clear short-term goals. In Terra Mystica, every round has two different goals to target. You can ignore them completely or follow them. In a game with a myriad of different choices, having short-term goals helps players focus on something. Even though it’s purely mechanical, it works wonders.

5. Brilliant Player Mat Design: I love a good player mat, and I think Terra Mystica has my favorite mat of any game (Viticulture’s is prettier, but Terra Mystica’s is more functional). Everything you need to understand the game is on the mat without using any words. I wonder how many iterations they went through to get it right, because the end result is brilliant.

If you like heavy Euro games, I could not recommend Terra Mystica enough. I didn’t think any game had a chance at beating Tzolk’in for my favorite game of 2013, but Terra Mystica has a shot. If you’ve played it, what do you think?

8 Comments on “My Favorite Game This Month: Terra Mystica”