My Thoughts on the P500 Program

Every now and then someone asks me what I think of GMT Games’ P500 program, and I typically tell them, “It’s cool! I’ll write about it someday.” Well, why not today?

GMT is a tabletop game publisher most known for Twilight Struggle, Dominant Species, and Battle Line. For years now they’ve used a really unique system of determining which games to publish. This is Project 500, or P500. 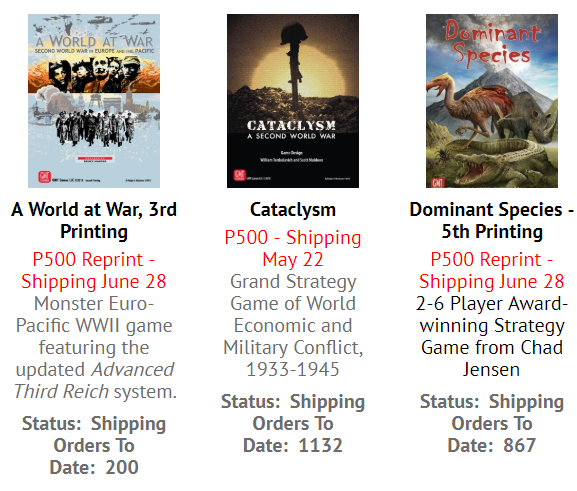 The core idea–which I’ll explain more in a second–is that GMT shares games they want to publish with their community, and people “vote” on those games with their dollars (though without actually being charged yet). If a game receives 500 votes, GMT proceeds to make the art and finalize the game, charging people right before it goes into production.

Why would a company do this? I think GMT says it well here: “What if the company knew ahead of time that there was a committed interest in the game, before they committed all those funds? They could produce exactly the games that their players want!”

The addresses 4 of the 6 reasons that creators often use Kickstarter for a similar impact: gauging demand, generate buzz, build community, and raising funds. It also addresses a customer need, guaranteeing that you get something you want (as long it actually goes to production).

Before I continue, here’s a sequential outline of the steps GMT takes for a P500 game.

I’ve never looked so deeply into the P500 system as I’ve done today, and I must say that I’m very impressed. The scope of it is incredible–just look at this page to see what I mean. Keep scrolling and scrolling. They currently have 47 games in art and development, and those are just the games that have made the cut!

What Are My Concerns?

I want to be clear in saying that I think this system is working well for GMT, and I don’t want to discourage anyone from putting their own twist on this unique system.

Really, there’s only one thing that makes me hesitate about P500: Customers know very little about the aesthetics of the games they’re pre-ordering. They can see the box art, but that’s typically it. However, my perception of GMT–and I could be wrong–is that their budgetary focus is much more on mechanisms than it is on illustration.

It’s just very different than Stonemaier’s philosophy, as I like to show people a lot of art and components to inform their decision to purchase the product. So if we invested heavily in art up front but a game didn’t reach the 500-unit threshold, it would put us in quite a hole, defeating the point of P500.

Also, most publishers don’t have dozens of projects in the works at any given time. So while P500 is much more low-key than Kickstarter or a self-hosted pre-order campaign, I can see why publishers would just prefer to maximize the spotlight of Kickstarter on the primary project they have in the works.

As for Stonemaier Games, I don’t think we would use a system like this. I’m comfortable with approximating demand through surveys and polls, and overall we produce far fewer games than GMT (I prefer to stay focused on 1-2 new games each year). We’ve moved more and more towards a system where we announce new products at the moment when they actually arrive at our warehouse (the Mechs vs. Minions model) so that people can get excited about something and have it in a few weeks instead of months later. Also, we sell the vast majority of our games through distribution, which doesn’t necessarily contradict the P500 model, but it’s just that getting a few hundred pre-orders barely moves the funding needle (or even accurately predict worldwide demand) when a standard reprint of, say, Viticulture is 10,000 units.

What Do You Think?

Have you purchased a game through the P500 system? Are there situations where you would prefer it to Kickstarter, or vice versa?

Also read: The Power of Pre-Commitment