I don’t like or endorse the use of Kickstarter exclusives. I want to be clear about that before I delve into today’s topic. I like promos, which are decidedly not exclusive–a promo is something you include in backer rewards and then can sell them at an additional cost post-Kickstarter (or give them away to conventions, retailers, etc.) But exclusives? Not a fan.

However, today I’m going to talk about a company that may or may not use exclusives to great success, and how this might apply to Kickstarter.

I recently watched a fascinating TED Talk by Josh Luber about Nike (transcript here). In short, the talk is about how Nike releases a new, expensive shoe almost every week. People wait in line for days to buy these shoes.

Like any business owner, I’m intrigued by anything that has people excited enough to line up for it. So what’s so special about Nike’s strategy?

The key is that Nike produces very few of these shoes, even though they could make more. They artificially lower the supply. Supply doesn’t inherently increase demand, but in the case of Nike, it turns out that there is a significant secondary market for these shoes. They’re viewed as precious commodities among “sneakerheads,” people who collect and prize shoes.

The result is an annual $1.2 billion secondary market.

People will wait in line for these shoes because the value of each pair is likely to significantly increase after the initial purchase. Sneakerheads can sell them for more later or feel special because they paid $200 for a shoe that is now worth $1000.

Here’s the question that has been nagging at me for weeks: Why does Nike do this? Sure, they sell a small number of expensive shoes very quickly, but why not just make more of those shoes and lower the price? Here’s what Luber says:

“Unlike Apple, who will sell an iPhone to anyone who wants one, Nike doesn’t make their money by just selling $200 sneakers. They sell millions of shoes to millions of people for $60. And sneakerheads are the ones who drive the marketing and the hype and the PR and the brand cachet, and enable Nike to sell millions of $60 sneakers.”

I’ve bolded the part that I’m not fully convinced about. On one hand, it appears to be true because Nike is so dominant. On the other, correlation doesn’t imply causation. Does the average consumer really buy $60 Nike shoes because a very small number of people are willing to pay over MSRP for limited-run shoes? Do people love the Nike brand because of the exclusive content, or despite it? 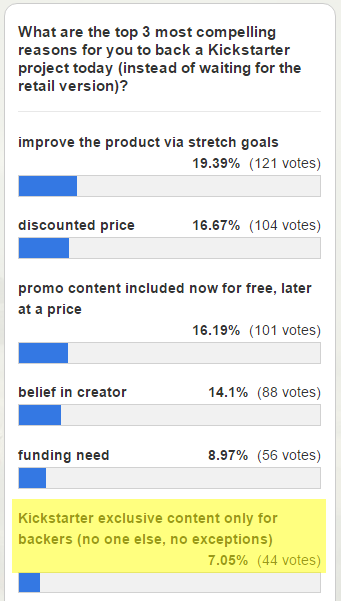 So why don’t other shoe companies do the same thing? As it turns out, they’ve tried, but Nike’s absolute domination of the market (96% of all secondary market sales are of Nike sneakers) has kept competitors at bay. On a human level, it makes sense–why would you invest in any other brand’s shoe when Nike is a sure thing?

Objectively, though, I think it’s fair to say that Nike shoes aren’t any better than the other brands. Or, if they are, it’s a pretty small difference. Adidas could design the most beautiful shoe ever, but sneakerheads are still going to want the the Nike shoe of the week.

This leads us to Kickstarter. The Nike strategy shows us that it is possible to create added value through exclusives. Whether that value is just to collectors or to the overall public is to be debated, as I mentioned above. But it’s possible, as Cool Mini or Not demonstrates in the tabletop game category of Kickstarter.

The key, though, is that it’s not going to help the vast majority of creators. For most projects, having exclusives is much more likely be be divisive and even despised–it will hurt your brand value more than it helps. It will alienate people who don’t learn about the product until after the Kickstarter campaign, and if you sell the exclusives to them anyway, you will lose your backers’ trust.

We all want people to be so excited about our brand that they’re willing to wait in line for a new product. But I’m reminded of a ramen restaurant I frequented when I studied abroad in Japan, a little place in Kyoto called Tonryuu. Tonryuu always had a line out the door, and it wasn’t because they only made a few pots of ramen. Rather, it was because the restaurant was small, and the ramen was so good that it was worth waiting for.

I think that’s the key takeaway for creators. Rather than artificially excluding people like Nike does, just make really awesome stuff.