One Box to Rule Them All 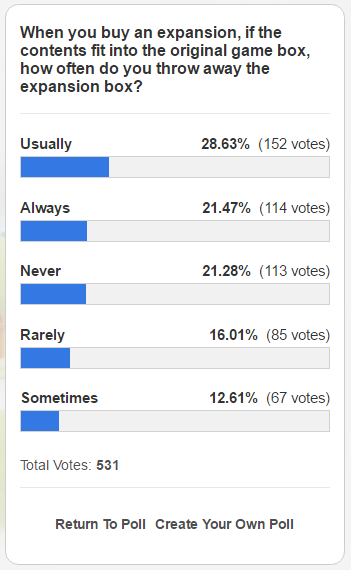 Never did I think box sizes would be the focus of my career. But this is the life of a game publisher! Here are some of the questions I’m asked most frequently, along with the factors I consider when deciding box size and a proposed solution for a frequent request about Scythe.

Will the Expansion Fit into the Original Game Box?

Whenever I announce a new expansion, this is the most commonly asked question. It seems that most gamers want everything to fit into a single box, which makes sense–we all have limits on shelf space and bag space (when we travel with games).

A few months ago I posted a poll on this subject: When you buy an expansion, if the contents fit into the original game box, how often do you throw away the expansion box?

Why Don’t Publishers Make the Original Box Big Enough for All Expansions?

I can’t speak for other publishers, but for Stonemaier Games, there are a number of factors in play: 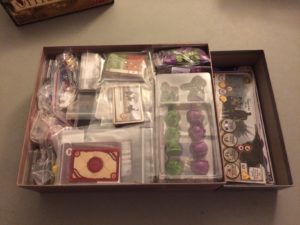 Can You Publish a Big Empty Box or Put the Next Expansion in a Huge Box?

At first I was surprised when I started getting these questions. Do people really think I would publish a big empty box? Is it reasonable to ask me to put an 12x4x4-inch expansion in an 18x12x8-inch box?

But as I’ve learned over time, if I get the same request over and over, clearly I’m the one who’s missing something. That isn’t to say that publishing a big empty box or putting the next expansion in a huge box is feasible or responsible. Here are some of the considerations:

I’ve also been asked if I’d put a fancy insert in a big empty box–that way it’s not quite as empty. That’s intriguing, but again, I don’t know what the future holds, so how can the insert be properly designed? And wouldn’t it undercut all of the third-party vendors who have put significant time and effort into creating custom inserts?

Why Not Make a Big Box Edition of the Game That Includes Everything Ever?

I’m sure you’ve seen publishers use this method. I have the El Grande big box on my shelf, for example.

I think this is a great solution if a game has been out of print for several years. Otherwise you run into the following issues (you’re probably starting to see some patterns here):

The Solution for Publishers

What does this mean for my fellow creators and publishers, particularly as you’re selecting the original box size? I don’t think there is a right answer, just a lot to think about. At the very least, you should be prepared to answer these questions with the answers that feel right to you.

Update: People have mentioned in the comments that other publishers have found solutions for this problem. There’s Smash Up’s “Big Geekly Box,” Red Dragon Inn’s 5th box, Alien Frontiers, and Champions of Midgaard (though I think some of those boxes include other content).

The Solution for Scythe

These questions are most frequently asked about Scythe. We packed a lot of stuff into Scythe’s original box (which is quite big), but we’ve since released the Invaders from Afar expansion, we’ll be announcing a new expansion in a few weeks, we’re brainstorming a third (and maybe final) expansion, and there are already a number of accessories for the game (both made by us and by third-party vendors).

We would want a box that can fit after-market inserts like those from Broken Token, Meeple Realty, and Insert Me Here. Also, it would be designed so that owners of the original Kickstarter editions (fancy box tops) could transfer their box tops seamlessly onto the big box.

I’m currently considering reaching out to a few of our accessory and third-party vendors (US and international) to see if they would be interested in sharing a print run of a big empty box for Scythe. I would configure the box (maybe using the original illustration or a different one) to be twice as deep as the original Scythe box but otherwise the same dimensions, which are designed to fit on a game shelf.

We would manufacture the box and ship it in bulk to those vendors. They would sell the box in their stores and on their websites along with (and/or bundled with) other Scythe-related products so consumers could pick and choose exactly what they want.

What do you think about this solution?

UPDATE: We’ve decided to make a “Legendary Box” for Scythe, the details for which are here.

I’d love to hear your thoughts in the comments about box sizes!