Rising Sun: What I Learned as a Creator by Backing My First CMON Campaign 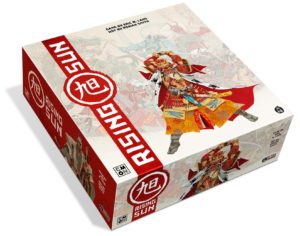 Learning the Japanese language for 10 years and studying abroad in Kyoto and Hiroshima has left me with a love of Japanese culture, people, and mythology. When I learned this past summer that one of the most successful game designers ever, Eric Lang, was working on a game called Rising Sun, I was incredibly excited for it.

Plus, as someone who writes about crowdfunding, I thought I might have something to learn from backing a CMON campaign, especially one that I’m personally invested in as a backer. So I marked my calendar for March 7 and became a $100 backer a few minutes after the project launched. I read every update and occasionally glanced at the comments. The campaign will end in a few hours with over $4 million in funding.

The following is a list of my observations and commentary about the project. It should be abundantly clear that this is not a list of methods I endorse for other creators, but there’s still something to be learned in these techniques:

Unfortunate exclusives: Okay, I’m going to share something with you, and this is very much my personal reaction–I’m not saying you’re right or wrong for liking KS exclusives.

While I appreciate CMON finding a way to celebrate the Kickstarter backers like me who pledged our support a full year before the game is released, and I take no pleasure in getting 21 exclusive miniatures that other people won’t be able to get.

I have a proposal for CMON’s next project big project. I propose that they feature two nearly identical $100 reward levels:

It’s like TOMS Shoes, but for KS exclusives. I don’t think CMON is going to stop making exclusives–in fact, a vocal number of backers in the Rising Sun comments wanted even more exclusives– so this method would let backers like me increase access for that exclusive content to people who don’t buy the game until later. I guess I could just buy another copy of Rising Sun for this purpose, but I’m not going to do that. :)

Who knows, I might be the only person in the world who would back at that second level. Let’s see what the poll indicates:

Did you back Rising Sun? What did you learn?

76 Comments on “Rising Sun: What I Learned as a Creator by Backing My First CMON Campaign”