This post is going to be a little different than what I typically write on this blog. The purpose of this blog is to help other Kickstarter creators by sharing my mistakes, insights, etc…hopefully this post will serve that purpose. I feel like there is something to be learned by what I’ve experienced over the last few days, but I’m not quite sure what those lessons are yet.

Also, just so it’s clear, this is not a self-congratulatory post. I’m really just trying to sort out my thoughts to figure out what the hell just happened and what I need to do about it. 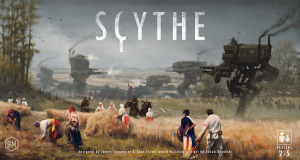 On Monday morning (a little over 3 days ago), I sent out our monthly e-newsletter to our 8,451 subscribers. This particular e-newsletter contained some big news: I’m designing a game called Scythe in a world being built by an extremely talented artist named Jakub Rozalski. You can see the cover art on the right–click it for full detail on BoardGameGeek.

If you missed the full story, you can read it on the archived e-newsletter.

Going into this announcement, I knew we had something special–that’s why I pursued the Scythe board game rights. Then again, we all think we have something special. That’s why we spend time and money creating things. We think our ideas are unique and special.

So I didn’t really know what to expect after the announcement. I certainly did not expect what happened.

From my perspective, it felt like Scythe broke the internet. I’ve never seen that many tweets, likes, comments, etc about anything we’ve done, even on Tuscany’s remarkable launch day on Kickstarter ($158,000 pledged in 24 hours) or Euphoria’s opening week, when it crept close to the top of the hotness list on BGG. Euphoria is the closest comparison, because the image I posted of all the components in the game (the retail components) on BGG went on to garner over 400 thumbs, the most of any BGG image in 2013.

Here are a few stats from what’s happened over the last few days regarding Scythe:

All this for a game still in very early development! A huge amount of credit goes to Jakub’s art–there’s no way this announcement would have made a splash without it. It also helps that Jakub has been fostering his fanbase for a while now. He has over 10,000 followers on Facebook (compared to 2,675 Stonemaier Facebook fans).

Needless to say, the last few days has been a whirlwind of activity–it takes a lot of time to keep up with all the comments on BGG, Facebook, this site, and Twitter. In fact, ironically, for a game that doesn’t exist yet, because of all the excitement over the last few days, I haven’t had any time to finish up the preliminary design.

So on top of all this attention Scythe has been getting, now there’s a ton of hype about it…no pressure on me to design a great game, right? I wonder if there’s such thing as too much hype. Does it only lead to people getting let down in the end if their sky-high expectations aren’t met?

Writing this has been very cathartic for me, and I think I have three insights to share from the experience that might benefit other creators (particularly tabletop game creators):

That’s all I’ve learned so far–it’s a work in process. If you have any thoughts, insights, or feedback, I’d love to hear it in the comments.