Statistics and Lessons Learned from the Viticulture Essential Pre-Order Campaign 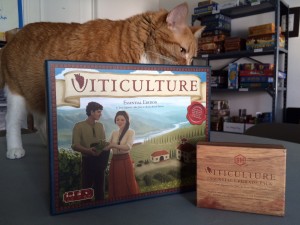 On September 1, we did something a little different (for us), though it’s completely in line with our Kickstarter philosophy.

We ran a crowdfunding campaign without Kickstarter.

Specifically, we ran a pre-order campaign using Celery (and a dose of Shopify). The difference is important to us, as we draw a clear line between crowdfunding and pre-orders.

The Difference Between Crowdfunding and Pre-Ordering

For Stonemaier Games, crowdfunding is used when we want to create something completely new for the first time and we want to build community, gauge demand, raise funds, and create the best version of the thing together with backers.

A pre-order is used when we already know for sure that we’re going to create something, we already have the funds to make it, we’ve already started making it, and no element of it is subject to change. In this case, we want to give people the opportunity to secure their copy by pre-ordering it. Also, by knowing pre-order destinations in advance–hence the limited time frame of pre-order campaign instead of an open, ongoing pre-order–it allows us to know how many games to freight ship to specific fulfillment centers around the world for direct sales, significantly reducing shipping costs for our customers.

We almost didn’t do a pre-order campaign for the Viticulture Essential Edition, but a few days before I was set to send out our monthly e-newsletter, Celery announced their new “Launch” feature, which is geared towards time-sensitive pre-orders. I have a good relationship with Celery, so I asked them if they wanted to help me put something together, and they were kind enough to work all weekend to make it happen.

This is in stark contrast to my Kickstarter projects, which I spend months preparing for. But that’s a running theme of this pre-order campaign–it was much, more more relaxing and hands off than a crowdfunding campaign. I’m not saying that’s always better, but this purpose, it was perfect.

Now, companies do pre-order campaigns all the time, but we tried several things that were a little different, so I wanted to detail what we did and the results, just in case you want to try something like this in the future.

My hope for the Viticulture Essential pre-order was to get 100-200 backers. That’s a big difference from my Kickstarter campaigns, which average about 3,500 backers, but this was a simple, no-frills campaign for a product that will be in stores in a few months no matter the number of backers.

So I was pleasantly surprised by the results for this 15-day campaign: 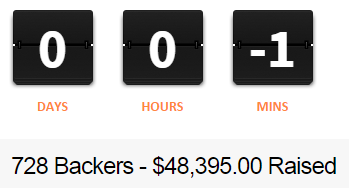 That number doesn’t account for a few retail backers. The true total is $57,735. Again, this is far less than our Kickstarter average, but it was still really nice to see that amount of enthusiasm for something that we did no advertising for other than 2 e-newsletter mentions and 2 Facebook posts.

I have a few theories about why it did so well:

I’m always curious about where our backers come from, both within a project and in comparison to previous projects. Here are the results for this campaign:

I particularly like to share this data because it has the potential to help other crowdfunders determine their ratios for freight shipping destinations when they’re putting together their estimates. Keep in mind that this is based on pretty low shipping fees since we use fulfillment centers in Asia, Australia, Canada, the EU, and the US.

Here’s the overall data from all of our campaigns:

It’s notable that Canada saw a pretty big drop, perhaps because of the weak Canadian dollar. However, I was happy to see that we’re even closer to 50/50 split between US and international backers. That’s been my arbitrary goal for a long time.

I learned a lot from this pre-order campaign, mostly about Celery’s capabilities and benefits. I’ll discuss them point by point below. I want to be clear that I don’t work for Celery and have no financial connection to them.

In fact, the only thing I’ve ever asked of Celery is that they give my readers a discount if any of you want to try it out: If you sign up for Celery, e-mail discounts@trycelery.com, and mention that you were referred by Stonemaier, they’ll waive the Celery fees (their portion is 2% of each transaction) for your first $1,000 in pre-order sales. 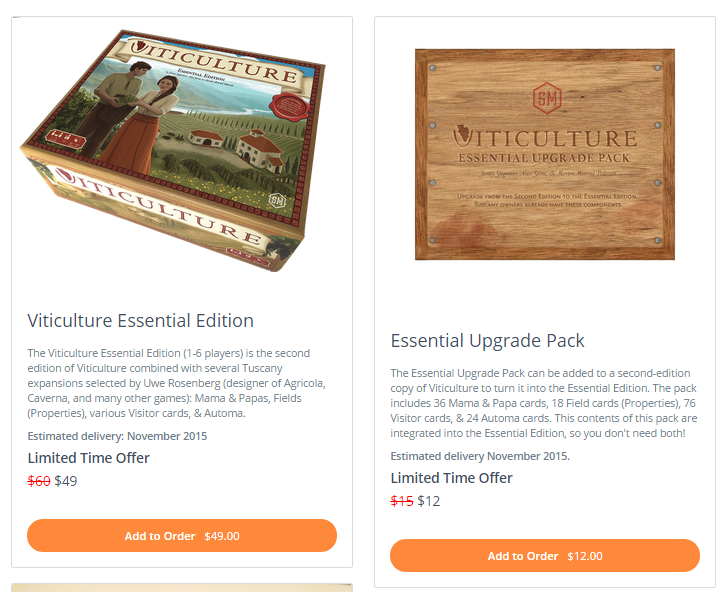 As I mentioned early on in this post, I consider Kickstarter and Celery good for different purposes, so it’s not really fair to compare them. But I’m going to highlight some of the differences below, just so you’re aware of them.

One other little note that’s primarily related to board games: I’ve seen lots of other pre-order campaigns that are similar to this ours, but they don’t show the current backer or funding total, and they don’t even let backers download the rules even though the games are in production. Why is that? It seems like all three of those things–crucial elements of a Kickstarter project–are ignored by some game companies. I think it was a big help to our Viticulture Essential pre-order campaign to have all three of those elements present on the project page.

If you were a Viticulture Essential pre-order backer, how was your experience? Or if you’ve pre-ordered through another company, I’d like to hear what you thought about their system as well.