Statistics from the Between Two Cities Kickstarter Project

Backers are individuals, not numbers. But I love sorting through post-project data to learn from what those numbers reveal. That’s what today’s entry for Between Two Cities is all about.

The intent of these posts is to give other project creators a more detailed, behind-the-scenes look at our data than what they can see on the Kickstarter project page. Please keep in mind that this is data for my fifth board-game related Kickstarter campaign, so if you’re a first-time creator, the percentages may be more relevant than the total values.

We’ll start with the bottom line as shown on the Kickstarter page for this 20-day project. These numbers don’t reflect backers who didn’t pay their pledge and backers who paid via PayPal (including most retail backers):

With core pledge levels at $29 and $39, this project needed a lot of backers to work. And it did–5,287 backers is the highest backer total for any Stonemaier project:

To me, this is largely a testament of the compelling nature of lower-cost rewards. I think it’s a good idea to expand our user base through some projects with lower costs to entry like this one.

The data in the chart below reflects the number of backers who pledged to receive at least 1 copy of Between Two Cities. A BIG part of the reason why I share this data is to help other creators estimate their funding goal–these percentages should help you guess how many backers you’ll have in each region as you budget for various shipping fees. 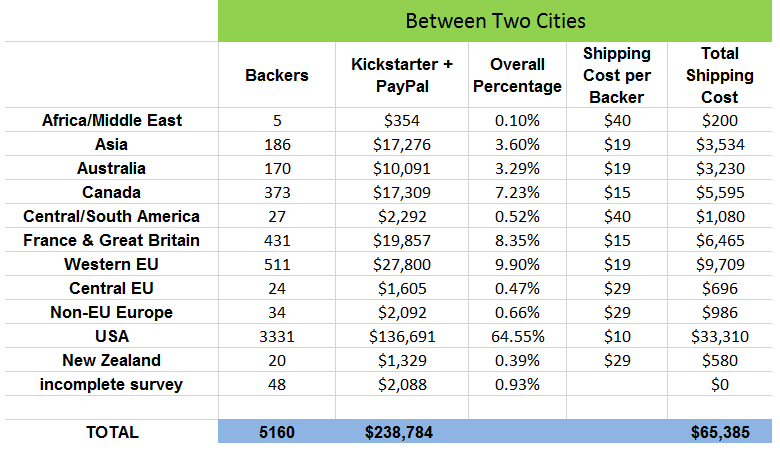 I was really curious about how this data would turn out for a few reasons. One is that the US dollar was pretty strong during the project, making the game more expensive for non-US backers relative to our previous projects. Ideally the dollar would be weak during our campaigns and then strong when we’re shipping. But that’s not how it worked out this time, and I think it had an impact.

My goal for a while has been to streamline shipping so much that my projects would be just as attractive to international backers as they are to US backers–a 50/50 split. Between Two Cities appears to be a step in the wrong direction for that goal. I think it’s largely attributed to the strong US dollar, but I’d like to find if there are other reasons for the international decline.

Where do backers come from? Kickstarter is only slightly helpful in these regards, as many of the “pledged via Kickstarter” backers probably found out about the project from an external source and then searched on Kickstarter for it. So take this with a grain of salt: 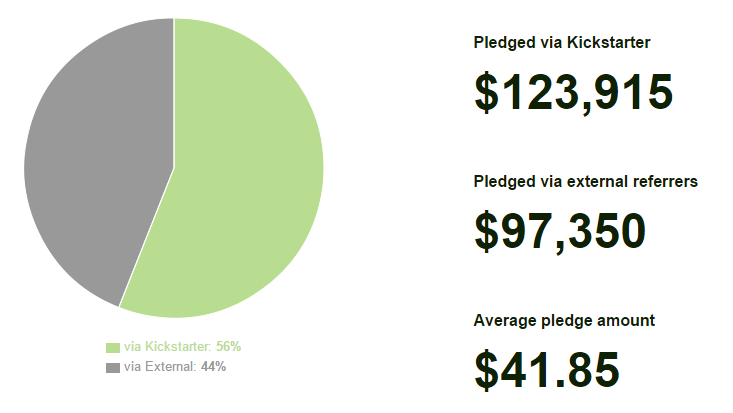 I don’t want to ever rely on Kickstarter to promote my projects–I consider it my job to get the word out there to reviewers, forums, e-newsletter subscribers, etc. Here’s how we’re doing in those regards as compared to previous projects:

So, kind of another step in the wrong direction. But the good side is that a number of new-to-Stonemaier backers joined us for the first time. I added 1,100 new opt-in e-newsletters subscribers after the project.

The data below shows backers’ previous exposure to Stonemaier Games. They were allowed to select more than one answer.

There are a few particularly interesting data points here: 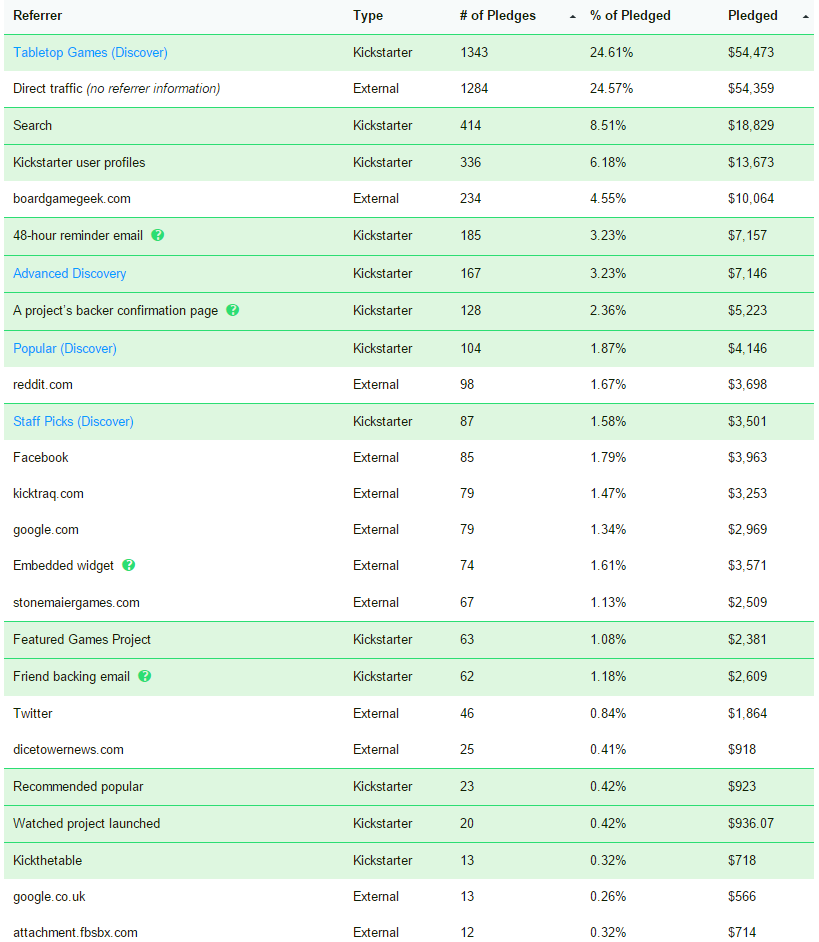 Again, the BoardGameGeek ad seemed like a good investment (though it’s hard to tell exactly how many people came from the ad opposed to the BGG page or forums). Reddit provided a nice, unsolicited boost, as did Kicktraq. And it’s neat to see 25 backers come from Dice Tower News.

I love an epic Kickstarter video, but so far I’ve taken the opposite approach: 10-20 seconds of facetime with my business partner to the camera, then a series of images highlighting the project (textual descriptions below, no voiceover–just background music). They’re not the sexiest videos, but I think there’s something compelling and homegrown about them–elements that are increasingly important as the company grows. I want to be responsible about our video budget and maintain a personal look to it.

Did I mention our videos are really short? Before the last Treasure Chest I aimed for 2-minute videos. Now my goal is 1 minute. Here’s a comparison chart for all of our projects:

I think it makes sense that more people will watch the entire video if they see up front that it’s a shorter video. That doesn’t necessarily mean that you should try to make your video 5 seconds long, though. Rather, I think it’s just more supporting evidence that it’s a good idea to cull your visual pitch down to the most compelling elements and cut everything else. You can always put a longer video lower down on the project page.

It’s always helpful for me to share this data with readers, as I bet you see some insights in this data that I’m unable to see because I’m so close to it. I look forward to hearing your thoughts in the comments section.

See also: The Top 3 Mistakes I Made on the Between Two Cities Kickstarter Project That You Can Avoid

20 Comments on “Statistics from the Between Two Cities Kickstarter Project”