I love sorting through the wealth of data following a Kickstarter project. As I do after each of my campaigns, I’m going to share that data with you today. This entry is about my recent treasure chest project.

The intent of these posts is to give other project creators a more detailed, behind-the-scenes look at our data than what they can see on the Kickstarter project page. Please keep in mind that this is data for my sixth board-game related Kickstarter campaign, so if you’re a first-time creator, the percentages may be more relevant than the total values.

We’ll start with the bottom line as shown on the Kickstarter page for this 16-day project. These numbers don’t reflect backers who didn’t pay their pledge and backers who paid via PayPal (including most retail backers):

This is a solid result on par with my expectations, but one number is particularly notable: The total number of backers is over 1000 backers fewer than any of our last 4 projects:

Granted, the treasure chests are a fairly niche product, and I’m elated and honored that over 2,000 people chose to back it. But that’s a big drop in backers–it’s a signal that I might be doing something wrong, especially when you compare this project to the original treasure chest project. We should have expanded our audience, not reduced it.

I have a few theories about this, and I’m open to hearing yours:

The numbers were much more evenly distributed than I thought they would be. This says to me that the vast majority of backers wanted “all the things”–it’s that completionist tendency we gamers have.

The data in the chart below reflects the number of backers who pledged to receive at least 1 treasure chest. A BIG part of the reason why I share this data is to help other creators estimate their funding goal–these percentages should help you guess how many backers you’ll have in each region as you budget for various shipping fees.

I was curious to see if the new inclusion of our Canada-friendly and Australia-friendly logos increased backers from those areas, but the increase was negligible compared to the first treasure chest project.

These percentages are on par with our other campaigns, with a slight increase in international backers compared to the Between Two Cities project:

It was only after this project that Kickstarter incorporated the potential for Google Analytics into each project dashboard, so I don’t have that data yet. But I do have the data Kickstarter provides: 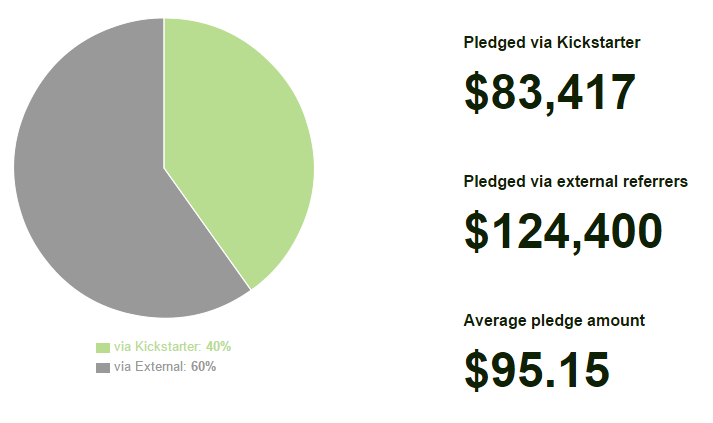 This data was very encouraging to me. I don’t want to rely on Kickstarter to promote my projects–I consider it my job to get the word out to reviewers, forums, e-newsletter subscribers, social media followers, etc. This was our best showing yet:

We also added around 500 e-newsletter subscribers after the project (opt-in on the survey).

The data below shows backers’ previous exposure to Stonemaier Games. This was a poll hosted on our website that I linked to in a few updates. Backers were allowed to select more than one answer. 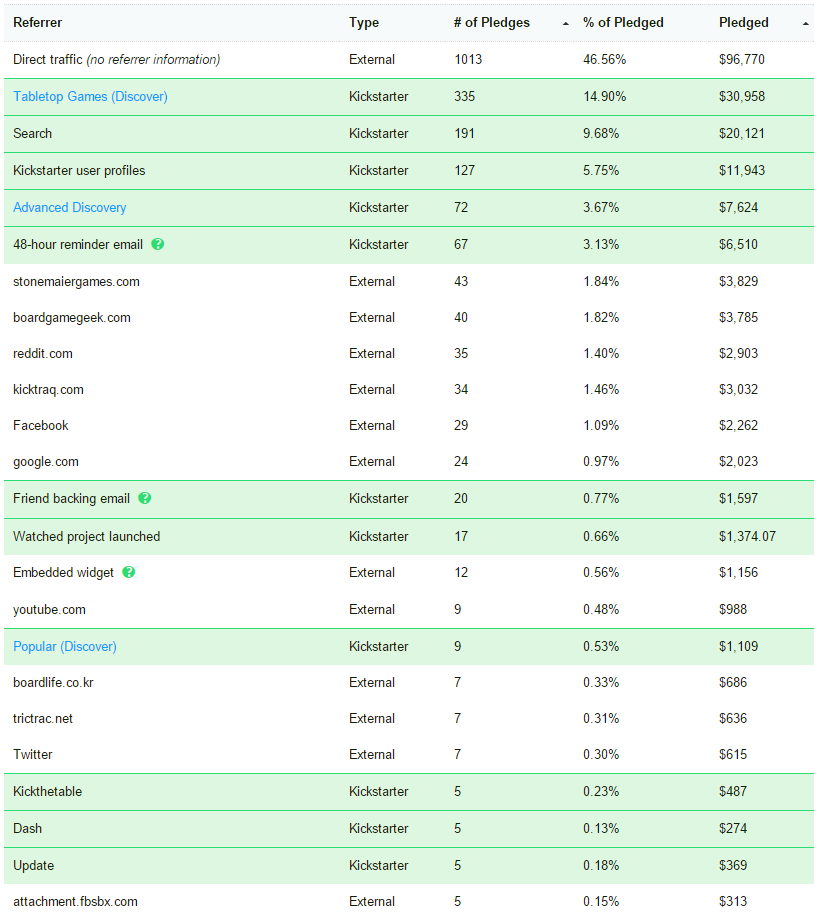 I think the majority of “direct traffic”–the top item on the list–is from our e-newsletter. Other than that, there’s not a lot that jumps out at me here.

We’ve continued using a sparse, short project video with an introduction from Alan and me, followed by music and some images. It’s hard to tell exactly how compelling a video like this is (I’m sure that more polished, professionally-made videos are better), but we do have some data to compare to previous projects:

The total number of plays went down, but the percentage of plays completed is our best ever. That’s good–if you spend time on a video, you want people to actually watch it to the end.

I’m so close to these projects that sometimes it’s hard to see some of the most interesting aspects of this data. What do you see that I’ve missed?

Also, if you’re a project creator who has written a retrospective or data-drive entry after your campaign, let me know about it. I really appreciate that type of transparency and generosity of information, and I almost always share those posts via social media or hyperlinked in one of my articles.

Richard Bliss and I also discuss this project on his Funding the Dream podcast.