Statistics from the Scythe Kickstarter Project

As I hinted at earlier this week on my post about the mistakes I made on the Scythe Kickstarter, today’s entry is all about the data. I’ve written posts like this for each of my Kickstarter campaigns.

The intent of these posts is to give other project creators a more detailed, behind-the-scenes look at our data than what they can see on the Kickstarter project page. Please keep in mind that this is data for my seventh board-game related Kickstarter campaign, so if you’re a first-time creator, the percentages will be much more relevant than the total values.

Scythe was a 24-day project that we started talking about online about 10 months before launch. The totals posted on Kickstarter don’t account for dropped pledges or backers who paid via PayPal:

These numbers definitely exceeded my projections, the best of which had Scythe funding at around $1 million. Of course, for any project I want to be prepared for it to be more successful than I thought, so I checked with my manufacturer in advance to make sure a significant uptick in pledges wouldn’t impede production.

By any quantitative analysis, Scythe is our most successful project to date. Our previous high in funding was Tuscany ($450,333) and our previous backer total record was Between Two Cities (5,287 backers). We exceed both of those totals by the end of the first day of the Scythe project, as shown on these charts from Kicktraq:

You’ll noted here that while Scythe had a fairly typical curve for a repeat creator–big first day, consistent middle area, uptick in the final 48 hours–there wasn’t a huge jump at the end (relative to the beginning). I consider this a good thing, as it means that quite a few backers wanted joined in early simply because they wanted to support and engage with the project (we didn’t have an early bird rewards).

Also, we reached our final stretch goal a few days before the end of the project, which meant we weren’t still reaching for something else at the end. I really, really liked the experience this created for backers. There was a sense of “this is awesome as it already is,” not “it’s not quite complete and I need to pay more to reach the final goal!” It’s incredibly important to me that backers feel like like their pledge is good enough, and in my experience, a big final goal can inadvertently cause backers to feel like they need to give more and more when they’ve already given so much.

Scythe earned $23,804 on its slowest day and attracted 211 backers on its least-backed day (two different days, oddly enough). It also garnered an average of 708 comments a day on the main project page (the total is currently over 18,000). We’ve never seen that level of participation and engagement on a project. It was amazing to experience, but it also meant that I had to use Gmail to filter out all notifications from Kickstarter (except for direct messages and comments on updates), as the sheer number of notifications quickly overwhelmed my inbox.

Also, Morten and his wife used the Tuscany growth curve to project Scythe’s growth curve to 96% accuracy after just 2 days of Scythe’s launch. Morten wrote an interesting blog post about their projections here.

The data in the chart below reflects all backers (Kickstarter and direct), as well as pre-order customers. A BIG part of the reason why I share this data is to help other creators estimate their funding goal–these percentages should help you guess how many backers you’ll have in each region as you budget for various shipping fees IF you use the Stonemaier shipping method. 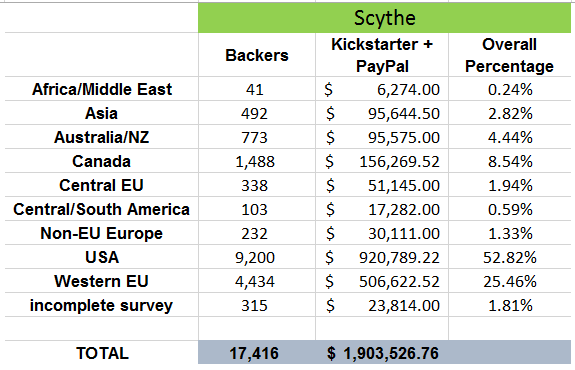 This roughly compares to previous projects of ours, except that there were more European backers than in the past (percentage-wise) and fewer backers in Asia. I think this may be attributed to large retail backer pledges in Asia–I bet the number of backers is the same, but many of those backers pre-ordered the game through a retail backer. I’ll talk about that more in a minute.

Also, I wanted to highlight the “incomplete survey” number. I send out our backer surveys immediately after a project ends, because we’re ready to start making Scythe, but I can’t do that without knowing the final quantity of each game and add-on. To encourage backers to reply to the survey right away, I informed backers on the final 2 project updates of the campaign that if they filled out the survey within 4 days, they would be entered in a drawing to receive one of the nice Scythe prototypes I created for reviewers. That proved to be a pretty strong incentive, though 315 is still a lot of backers for whom I have to make educated guesses on their pledges.

To keep myself accountable for making our products appealing to audiences around the world, I always look at the data for US vs. all other countries. I’m really happy to report that Scythe had the largest percentage of international backers for any of my projects:

One last chart I can now share thanks to Kickstarter’s inclusion of a Google Analytics tracking code is of the countries whose citizens visited the Scythe project page the post. Notable on this list is Poland, which makes sense, because Jakub Rozalski (Scythe’s artist and worldbuilder) is Polish and has a large following there. 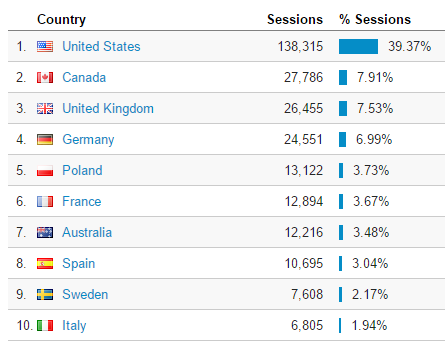 While Kickstarter’s referral data isn’t the most reliable, as it doesn’t refer to the original source of you learning about Scythe, it can offer a hint at how well we’re doing at getting the word out about Scythe so our projects aren’t relying on Kickstarter itself as a marketing tool: 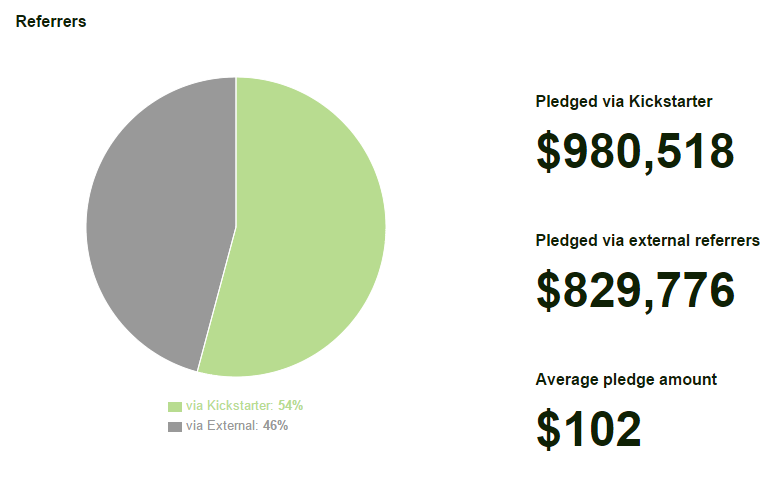 More accurate is the data given to us directly by backers. These are the results of a backer poll we linked to throughout the project that asked how backers were connected to Stonemaier Games or Scythe. They could select any number of answers:

As you can see in the data above, the number of backers who heard about Scythe from Kickstarter itself instead of other sources is much lower than Kickstarter indicates in their referral data: 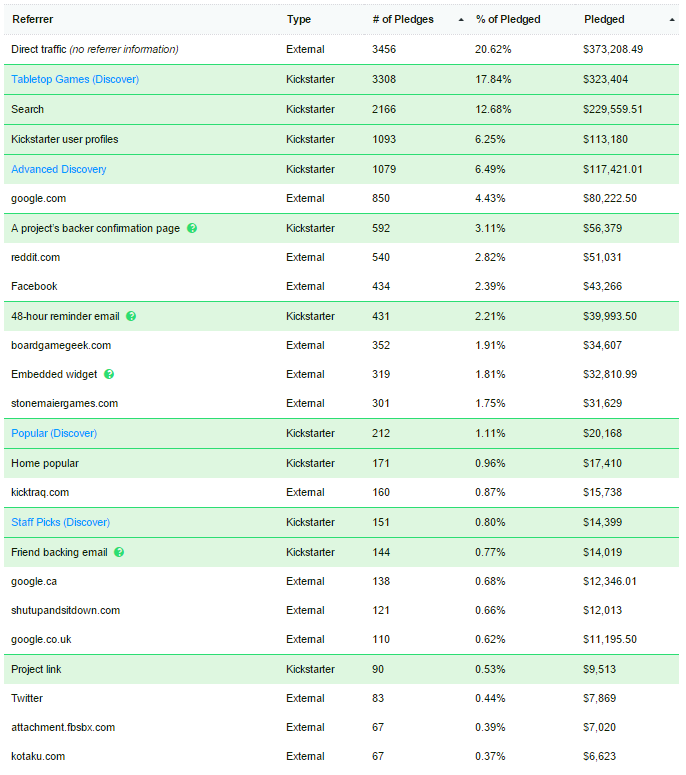 Notable here are reddit (where there was lots of conversation about Scythe leading up to the project; plus, I did an intense AMA there near the end of the campaign), Shut Up & Sit Down (though Quinns said on his post that he wouldn’t be backing it), Kicktraq, and Kotaku (which was where I originally discovered Jakub’s art).

Google Analytics confirms the exact amount of traffic that came from these sources: 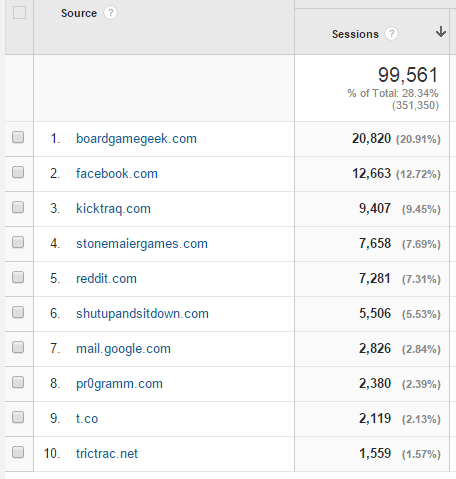 BoardGameGeek attracted 352 backers for a total of $34,607. It’s tough to tell how many of those backers clicked on BGG ads vs. other links on BGG, but I do have the data on click-through rates from BGG ads. Scythe ads (sample below) garnered an 0.80% click-through rate, which compares favorably to Between Two Cities (0.42%) and Tuscany (0.55%).

The Scythe project video got a LOT of plays, thanks in large part to the video editor, Josh McDowell:

Here’s how it compares to previous project videos. It’s interesting to see that even with a professional-grade video like this one, shorter videos still have a much higher completion rate: 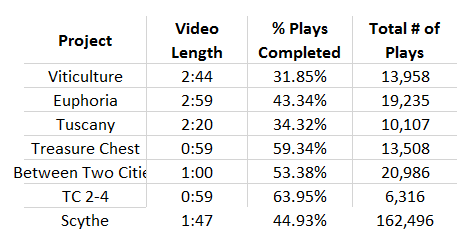 With every subsequent project, we seek to improve our relationships with retailers (both online retailers and FLGS brick-and-mortars). For Scythe, we started out with a list of about 100 retailers whom we directly contacted about the project. That list grew to 240 total retailers by the end of the project–there were a lot of retailers who reached out to me based on the note on the project page.

We ended up with 106 retail backers who actually pledged to Scythe. They had to buy a minimum of 4 games and had to pay shipping costs based on the region, but they were offered a slightly lower price than individual backers. We did not allow group buys of Scythe, as we already offered significantly discounted prices on Kickstarter (e.g., Scythe is an $80 MSRP game without promos that we offered for $59 on Kickstarter, including a $15 shipping subsidy and all promos).

I encouraged retail backers to accept pre-orders for Scythe during the Kickstarter campaign, with the stipulation that they could not offer prices lower than those listed on the Scythe project page. This was my way of saying, “Keep your customers, but don’t undercut me.” They had to complete their orders during the campaign just like any backer, and many retailers bought more copies than their pre-orders, which they should be able to sell for a premium price (though they can charge anything they want now that the campaign is over, just like any backer who decides to sell their games on the secondary marketplace).

Retail backers had the option of paying up front and thus contributing to stretch goals or delaying their payment (max. 10 games) until we’re ready to ship the games to them, at which point they’ll pay the Kickstarter price plus a $40 delayed payment fee. We had 27 retail backers take us up on that offer, and the feedback I got from all retailers was that they appreciated the option.

In total, retail backers pledged to receive a total of 2,080 copies of Scythe, in addition to 544 add-on items. Their pledges–mostly paid via Kickstarter and PayPal–amounted to $137,608. My takeaway here is that retailers are definitely interested in working with Kickstarter creators.

In total, based on backer copies and a small retail print run, we’ll be making a total of 26,000 copies of Scythe. This is the largest print run of any Stonemaier game so far.

ADDENDUM: Ian Kragh sent me some really beautiful charts that feature the Scythe data in a different form.

33 Comments on “Statistics from the Scythe Kickstarter Project”