I recently wrote about some of the data compiled from our recent Treasure Chest Kickstarter project on this blog entry, so the statistics for the Treasure Chest are split between that post and today’s post. If you love stats, here’s the data for Euphoria and Tuscany.

The intent of these posts is to give other project creators a more detailed, behind-the-scenes look at our data than what they can see on the Kickstarter project page. Please keep in mind that this is data for our fourth board-game related Kickstarter campaign, so if you’re a first-time creator, the percentages may be more relevant than the total values.

Let’s start with the bottom line, according to Kickstarter (we also received some payments via PayPal, which aren’t shown on the following graphic):

These are healthy numbers, and definitely in line with our projections. The only trend I’m a bit concerned about is that our total backer count per project is dropping:

I’m not too concerned at this point since the Treasure Chest was an accessory, not a game, but it’s something I’ll keep an eye on for our next project.

As was the case with our last few projects, our fulfillment system allows us to offer low pricing worldwide (as well as shipping from within the EU, Canada, and the US to avoid imposing customs fees on backers). The “shipping per backer” total shown here is the total shipping cost to us (freight + courier); $10 of that was included in every reward. 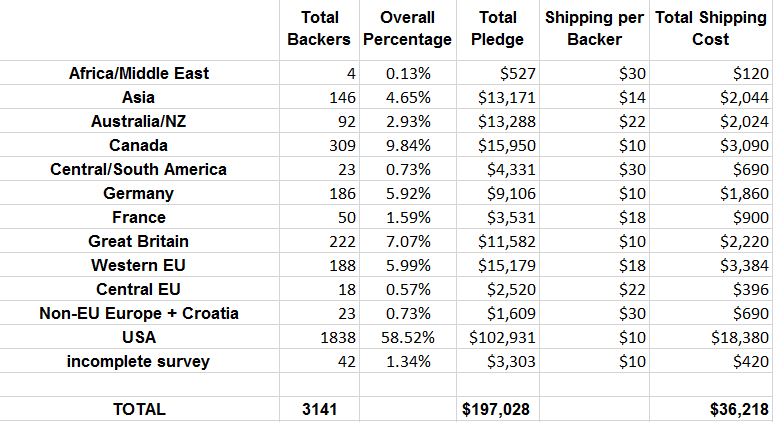 A few things to note: The “total backer” number is less than the actual number of backers because some backers pledged at the $1 level (no shipping involved for the backer toast). Also, Croatia stands out a bit here because even though it’s part of the EU, Amazon.de and Amazon.co.uk won’t ship there via multi-channel fulfillment yet for some reason.

In a vacuum, this data doesn’t tell us much, so let’s compare it to the overall location data for our other projects:

The numbers are pretty much on par with Tuscany. My goal is to figure out worldwide shipping (and other factors that are compelling to international backers) so that backers are evenly split 50/50 between the US and the rest of the world.

I’ll weigh in on whether or not this was a good idea in December, but for now I have the data for the breakdown between the two.

I’m pretty pleased with this breakdown. The air freight option wouldn’t be worth it if we’re only shipping a dozen games to a certain area, but it worked out well here. I probably wouldn’t offer this option for any project, but if we’re trying to deliver some products by a certain seasonal date (i.e., before a big convention or the holiday season), it’s something I would consider doing again.

Where do backers come from? I’m always thinking about that. We’ll start with the overall data for Kickstarter vs. external referrers: 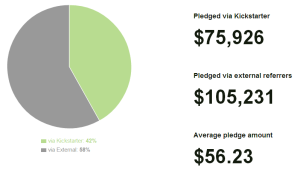 I’m always interested in this number, because I want more people to discover our projects through external sources than Kickstarter. Kickstarter isn’t here to promote our projects–it’s our job to get the word out about them. So this data tells us if we’re doing our job. Let’s compare to past projects to see how that’s working out:

I’m very pleased to see that trend. Let’s dig deeper to see how Kickstarter views the various referral sources. Notes below, followed by a long chart to end this post: 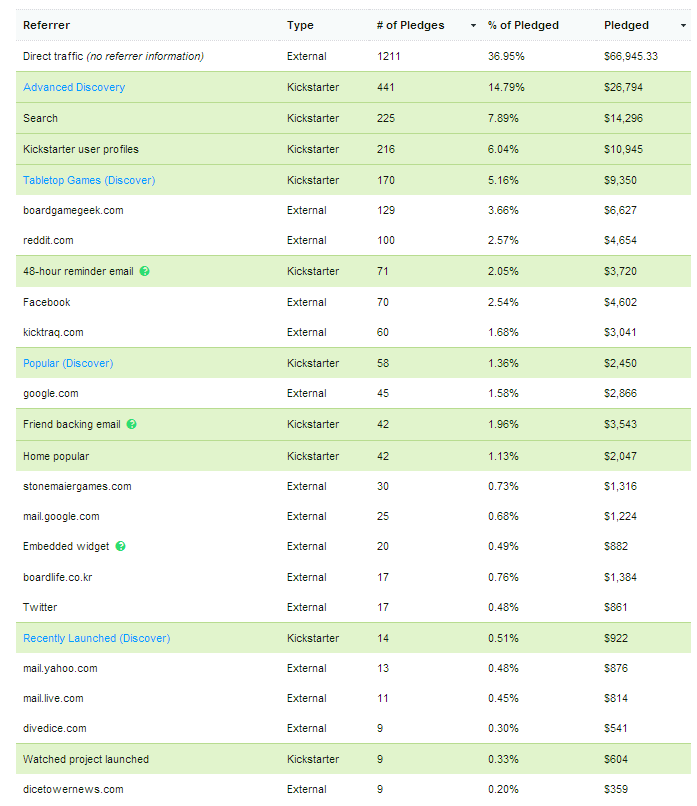 What was it about Euphoria that made it so special? Here are a few differentiating factors I can think of:

It’s hard to tell which differentiating data points are relevant! I’d love to hear what you think.

42 Comments on “Statistics from the Treasure Chest Kickstarter Project”