Throughout my time running Stonemaier Games, I’ve really come to appreciate the utility of buffers. Having a padded budget or schedule has saved me a number of times. And when things go well–like recently when Wingspan arrived at our warehouse in early December–it’s reassuring to know that sometimes things go as planned.

I’ve talked about the buffer on a few different posts, but I’ve never focused an article solely on this topic. So I asked Petter Schanke Olsen, creator of two Kickstarter projects, to write about the topic. Thank you, Petter! 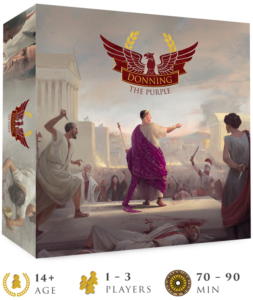 One of my golden rules as a Kickstarter creator is to be cautious and careful in all aspects of the journey. That rule is active all the way from the moment the game idea pops into my head and to the game is in the hands of the backers.

There are so many things that can go wrong in the process and most likely something will go wrong during a project. And when it does, it’s my job to be prepared. One of my best weapons in project planning is the buffer.

For example, when I try to estimate the delivery date for my board game projects, I always add lots of buffer time. For my latest project, Donning the Purple, I added one month of buffer for each stage of the project. When the game funded at the end of this March, I sent this project timeline to my backers.

As you can see, there are a lot of buffers here. So many campaigns these days deliver too late and I did not want to be part of that statistic.

Luckily the production process went pretty smoothly and no big problems appeared. Most of my backers received their games by the end of November, and fulfillment will be completely done in December. That means the project delivered 6-7 months earlier than estimated, depending on where the backers live in the world.

Buffers are also useful in my budgets. I have lots of buffers in my budget. Almost in every post. At least 10%.

Doing that helps creators like me be prepared for for unexpected things like Brexit and trade tariffs.

As a creator, I hope to under promise and over deliver. I have been able to do that on both of my projects so far. My backers seem to be pretty happy with the results, so I’m glad I had buffers in place to increase my chances of achieving that goal.

When Petter and I were talking about this topic, we mainly focused on schedule and budget buffers. But I’m sure there are others that creators can implement, so I’d love to hear your examples in the comments. And thanks to Petter for writing this!