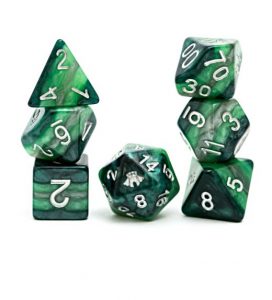 Today my friend John Wrot from Gate Keeper Games joins us with a story about how his company started out focusing on a certain type of product before making a big pivot to another product. He has a current Kickstarter for that product.

In February of last year Jamey asked me a question.  He said: “I had a thought that stems from an observation that may or may not be correct. The observation is that you’ve pivoted from being a board game company (2014-2016) to being a premium dice company (2017-). If that’s true, knowing how sharp you are, I’m guessing that you made an intentional pivot for reasons only known to you. If so, would you ever be interested in writing a guest post about that pivot? I think other entrepreneurs could learn from such a courageous move.”

While I’m not sure courageous is the right word, I am happy to share my story.  It’s writ with fellow designers in mind, but maybe there’s something for everyone.

Short backstory: From 1998 till present I’ve designed games to play with my friends.  We played almost exclusively my game(s).  In 2013 I designed a spin-off game from one of my larger designs, and my friends said “This one you can publish as a stand-alone board game!”.  My wife nodded assuringly, and two days later I started my first Kickstarter account.  A year later The King’s Armory (TKA) was born.  I was proud of it, the hard work, the community building, the crazy stupid things I did to pull it off, and that it sold out in 3 months at retail.  But I was super noob at this, and didn’t set aside income for a reprint.  Doh!

TKA ran on a d20 combat system like a Role Playing Game (RPG), and with its design came a new technique for dice design, layering of colors instead of swirling them.  We called them Halfsies, we ran another successful Kickstarter, and, as a result, broke into, what was at the time, a very small dice industry.

Gate Keeper Games is now Gate Keeper Games & Dice.  I now spend 98% of my work week designing dice instead of games, and finding ways to bring new designs to life for RPG players and dice collectors.

So what changed?  When did I choose it?  Why am I still here?  … I think these are all still great questions.  You may have noticed Jamey asked me a year and a half ago, and I’m just now answering.  It’s because I’m just now ready.

While I still think of myself as a game designer, as I very much am by nature, I’m coming to terms with the fact that I’ll choose to run a Role Playing Game like Dungeons & Dragons, or my 22-years-in-the-making RPG system that TKA was a spin-off from over playing board games most times.  Yes, I’m a board gamer, and I love our nights when we play games (8p Captain Sonar is my current addiction), but whenever I host… its RPGs.  I’m am Role Play Gamer at heart.

See, the hard part for me was always trying to fit in.  I wanted to be part of the ‘cool’ board game industry.  But I rarely fit in, because at the time, I barely played board games!  It was the wrong move personally and professionally.  I think I lost more friends than I made.  (Thank you Jamey for sticking by me.)  Now in the RPG and dice spaces it’s like I’m starting over trying to make friends all over again. It’s not a sob story.  It’s a story about accepting my own weaknesses, my own choices, and choosing to move forward with what I enjoy.

The reason I’m still here is two-fold.  One, I really really enjoy it.  It’s not easy.  Honestly about as hard as designing a balanced, fun, AND repayable game.  But I enjoy it.  I love pushing the limits on everything.  What can we do with our next dice line that shouldn’t be able to be done, what can be new?  The second reason is really pragmatic:  It feeds my family.  I was put in a situation, a business model, that allows me to work from home, fund all the bills so my wife can be a stay-at-home mom (we even homeschool!), and even splurge once in a while.  We’re far from rich on this model, but we’re living the dream, and I’m very grateful for it.

Will I ever design games again?  I think so.  I think I’d die without the creative release of game designing.  So we have a 2nd Edition of TKA slated for the fall (“Finally!” say the fans), but it’s slow going with only 2% of my time!  Hah.  In the meantime, we’ve released over 90 dice designs full of innovations.  And that… that feels good.

So that’s my story.  I don’t know if it was helpful, or even interesting, but I sure do appreciate you taking the time to spend with me.  Designing is fun, yes.  But it’s the people that are my first love in the gaming industry.  So, thank you for listening.

Have you ever made (or seen someone make) a pivot? What did you learn from the experience?

9 Comments on “The Big Pivot”