Play-and-win continues to be my favorite way to support game conventions (and hopefully get a return on my investment). Last year I wrote a few posts about the concept (open letter here and 2014 data here), and today I’d like to dig into the data that Geekway to the West recently shared with me following their 2015 convention (which I attended–it was awesome).

Play-and-win works like this: Publishers donate games to a convention’s play-and-win section (if you’re a convention that wants publishers to do this, enter your information here). Any convention attendee can check out a play-and-win game (or play any copy of that game in the game library or that someone brought to the convention). When they return the game, they write the names of everyone who played it (or taught it) on a piece of paper, which they deposit in a jar next to that game. At the end of the convention, one person who played the game will win it based on a random drawing.

Geekway continues to innovate and improve the play-and-win system. This year they had an entire room devoted to play-and-win so that games with more elaborate setup and cleanup could stay on the table instead of being checked in and out. There were other games on a shelf that you could check out, and the jars where you put the player forms were stacked vertically nearby. It was really impressive.

The reason I’m posting this data is to help publishers decide which games to donate to play-and-win sections at conventions.

A hybrid spreadsheet of the data Geekway gave me and some of my calibrations can be found here. Below is a screenshot of the top 20 play-and-win games at Geekway based on total number of players: 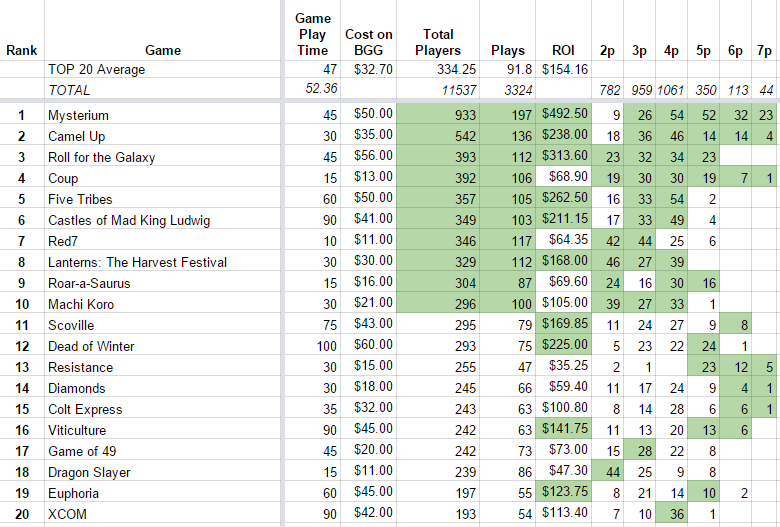 The green highlights indicate the top 10 games in each category.

Note that while this is the top 20 based on total players (and total plays), there are many other games on the spreadsheet that got a ton of table time at Geekway. They’re just as important as the top 20, but I’m going to focus on these games for this discussion.

Play Time (average: 47 minutes): There’s a pretty broad range of play times in the top 20. With one exception (Castles, which can play in an hour if you know how to play), all of the top 10 games play in under an hour. That’s indicative of the average player’s attention span at a convention and perhaps a broader gaming trend.

Complexity: This is my subjective analysis of the top 20 and what I saw at Geekway. Many of the games on this list are pretty easy to learn. However, I’ve noticed that people don’t shy away from complex games at Geekway, even if they’re learning the rules from the rulebook without a teacher. I think people see it as an opportunity to learn a game they’ve been wanting to try–a 4-day convention gives you plenty of time to do that.

Price (average: $32.70): This isn’t MSRP–this is the “new” Amazon price as listed on BGG (which means average MSRP is probably around $45-$50). This is in line with last year’s data and data from my retailer survey.

Total Players (334) and Plays (92): These are the numbers all publishers need to see. Do you want your game played 92 times by a total of 334 people this weekend, most of whom have never played your game before? Absolutely. That type of exposure is exactly what a publisher wants. I know I do!

Return on Investment (average: $154.16): The ROI calculation looks at the number of times a game is played (plays, not players) and assumes that at least 1 person in that game will later buy it 10% of the time. Multiply that number by the 50% of the price (which turns out to be a rough indication of a publisher’s wholesale revenue per game) and you get your ROI. Granted, this is a very rough calculation, but the point is that the exposure a game gets through play-and-win can translate to several times more than the value of the donated game.

Mysterium and Camel Up

Mysterium (933 players) and Camel Up (542 players) had by far the highest total player counts of any play-and-win game at Geekway. In fact, they far exceeded the previous year’s winners as well (Sushi Go at 440 and One-Night Ultimate Werewolf at 422). What makes these games special?

Mysterium is a hugely hyped game (it’s basically Dixit with an ongoing mystery) that got a lot of attention at BGGcon last fall. It’s currently very hard to find, as it hasn’t been released in the US, so I think there was a lot of pent-up demand for people to try it for the first time.

Camel Up, a camel-racing game in which players are people betting on the camels, won the Spiel des Jahres award in 2014. It’s colorful and whimsical in a way that is really inviting to players looking to try it.

Both games are very easy to learn, and they’re both language-independent (while it’s not always the case, for these games I think that’s an indication of ease-of-play. Who wants to read words when you can look at pictures instead?) Both play from 2-8 players, which is a big deal. Few games offer that range. And both are pretty fast–Camel up is a 20-30 minute game, and Mysterium is 45-75 minutes.

I think it’s hard to emulate the success of those two games. I played both of them at Geekway, and they’re a lot of fun. You can’t just create an excellent, highly acclaimed game out of thin air. But it’s worth trying, and if you succeed, send it to play-and-wins to get a lot of attention at conventions!

What do you think about this play-and-win data? Did anything stand out to you that I overlooked? I’d love to hear your thoughts.