It’s exceptionally rare that I give away a product for free as part of a contest or raffle.

I’ve discussed this subject in detail here and here. I’ve seen very little proof that contests and raffles generate sales. While the mission of Stonemaier Games isn’t about revenue, but sales need to be at least a byproduct of every decision we make. Otherwise it’s not a sustainable business.

A few days ago, one of our advisory board members (Craig), shared with me something he saw on Facebook and LinkedIn: 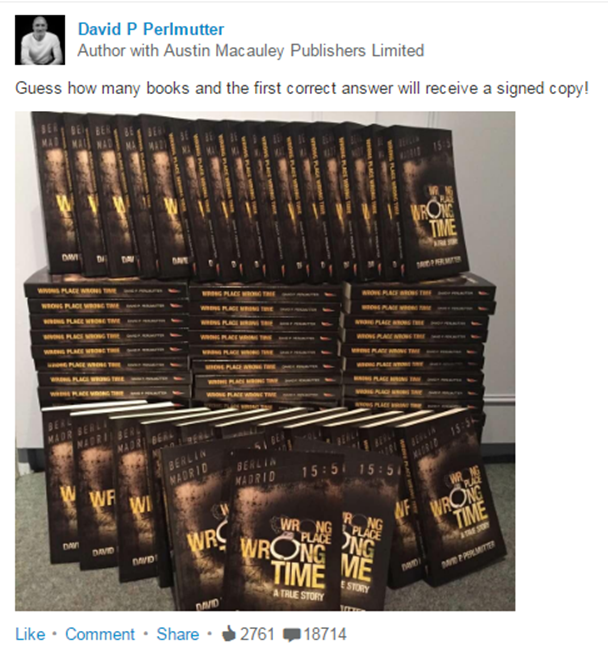 Pretty impressive stats, right? But…likes and comments do not equal sales. Did anyone buy this book as the result of participating in the contest?

The answer: Honestly, I have no idea. I’m sure the contest exposed a lot of people to the book. In my opinion, though, it’s missing a thematic hook to make people want to learn more about the book. Nor is there anything about the image that grabs you and makes you want it now.

But I liked the general idea, so Craig and I brainstormed some revised versions of it. Coincidentally, I had a photo on file from a recent resorting of extra realistic resource tokens, so with Top Shelf Gamer launching pre-orders for a new batch of the tokens, the timing seemed perfect.

Here’s how I posted it to our Facebook page, with a few key improvements over the contest that inspired it (the “update” part wasn’t on the original post): 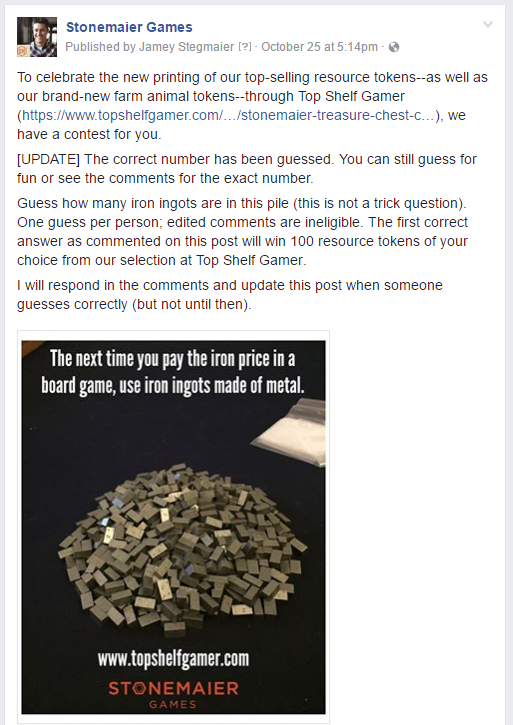 Can you spot the differences between this contest and the original? Here are a few of them:

However, within about 30 minutes, someone guessed correctly. I didn’t think it would be ethical to let people keep guessing after that, so I informed the person that she had guessed correctly, and I updated the post. Activity on the post almost immediately stopped.

It would be nice if I had sales data for you to see if the contest worked, but I actually sent out our e-newsletter (which featured the pre-order) the next day, so any data I might have is corrupted.

But I still had fun with the contest, and hopefully it inspired at least a few people to check out Top Shelf Gamer to learn more.

For creators thinking about running a contest like this, make sure you don’t do it on Kickstarter itself–they have ambiguous rules about contests.

What do you think about this type of contest and the way we ran it? What would you have done differently? Have you seen any contests that do a better job at generating sales?

29 Comments on “The Numbers Game”