The Pendulum Preorder Is Live! 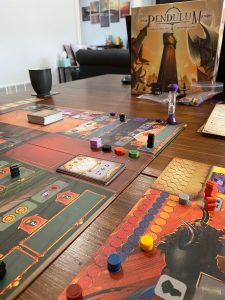 I typically don’t use this blog to feature Stonemaier Games products or news, but we literally only have one new game in 2020, so I’d like to share it with you today!

Pendulum takes place in a fantasy world themed around the concept of time. You play as a character–including a sentient dragon, minotaur, or sphinx–vying to claim the throne. Robert Leask designed the world as he illustrated it, corresponding with game designer Travis Jones while doing so.

The game itself is a turnless worker-placement, engine building game for 1-5 players. Pendulum is designed primarily to be played over 4 real-time rounds in which you place workers on actions with increasingly better benefits the longer those workers must spend on those actions.

I love time optimization in games, especially when I’m able to link together a series of turns and actions that build upon each other. That’s been my experience with Pendulum whether I’ve played it with the sand timers or with the untimed version.

To appreciate our early-adopter preorder customers, we’re offering Pendulum at a 25% discount through Sunday (it’s $45). Per our methods over the last few years, we’ve already made the game, and it will arrive at fulfillment centers (US/UK/CA/AU) in mid-August, at which point we’ll ship to preorder customers. You can also preorder it from your preferred game store for the September 18 retail release.

Here’s a direct link to the preorder in case you think this is a game you might enjoy (and if you need some help deciding, here are reviews and playthroughs of advance copies). Thanks for checking it out!

2 Comments on “The Pendulum Preorder Is Live!”