The Problem with Potato Salad 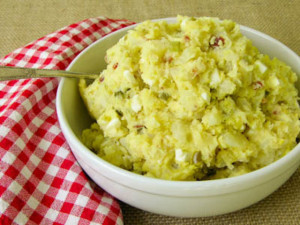 I very rarely say anything bad about another Kickstarter project, especially on this blog. Who am I to judge another project creator? Just because someone does something differently than I would do doesn’t mean I should speak poorly of them.

However, there is a project happening on Kickstarter right now that I think is bad for Kickstarter. Specifically, it’s bad for new project creators who discover Kickstarter thanks to this project.

Potato salad is a gag project (note: I’m making an inference here). A guy named Zach Brown thought it would be funny (another inference–Zach has not publicly stated that he was trying to be funny) to put a project on Kickstarter in which, if he reached his $10 goal, he would make his first potato salad. “Rewards” include him saying backer names out loud while making the potato salad, a photo of him making the potato salad (he doesn’t specify digital or printed), or a bite of the potato salad (no details in the reward showing how he intended to get that bite to people, but he has since decided to host a party in Columbus after the campaign to provide those bites to backers).

Estimated delivery for all of these rewards: December 2014. Further evidence this project is a joke.

Here’s the twist: in 4 days, Potato Salad has raised over $14,151 from 1900+ backers. Yes. Those are real numbers. (They’re actually fluctuating quite a bit as a few backers are making–and then retracting–$10,000 pledges. Just for fun. No big deal.)

Before I go on, let me say this: As a gag project, Potato Salad is clever. Not as clever as the opposing Death Star and X-Wing Fighter Kickstarter projects, but still clever. I enjoy a good joke, and I’m glad people are deriving joy from the project. I applaud the idea of having fun with backers on Kickstarter (though that usually involves some commitment to interacting with backers–Zach has only made 5 comments in the main forum of his project, the most recent of which was 2 days ago).

1. Kickstarter is free money. I’m sure at some point you’ve seen a project where the creator clearly thought Kickstarter was free money. They slapped something together in their garage over the weekend, somehow got it approved, and launched it a few days later. The thing is, those projects don’t fund. They hardly attract any backers at all. Thus they serve as an excellent warning to other creators about the work they need to put into projects. Potato Salad is doing the exact opposite. It makes Kickstarter look like free money, which is the worst possible perception new creators could have about the site.

2. Getting press for your project is easy. If you’ve ever tried to get press for anything, you know how hard it is. It’s why I advocate actually building relationships with the press (bloggers, podcasters, etc.) so you can have a slim chance of leveraging that press into big press–major website, television news, etc. You create your own luck.

Potato Salad, however, is making it look like all you have to do is put a project on Kickstarter, and the press will come to you. And really uninformed press, at that. Here’s how ABC Columbus introduced their 3-minute segment about the project (this is a verbatim quote): “Kickstart is a funding website where you can help others with a goal–maybe a trip, buying a house, or for Zach Brown, make potato salad.”

Yeah…you can’t use Kickstarter to buy a house.

3. You don’t have to give backers anything in return for their pledge. I already talked about the “rewards” Zach is offering. If you look at most other projects with blase rewards (or way overpriced rewards), you’ll learn right away that they don’t work. Kickstarter isn’t a charity. In fact, the very definition of Kickstarter is that “Projects must create something to share with others.” Potato Salad offers a very, very thin representation of that definition.

4. Actually needing the money isn’t required. The truth is, Kickstarter doesn’t require creators to prove they need the money to make their project a reality, and that’s a good thing–it means that Kickstarter is about much more than just money. But it’s certainly part of the equation. It’s much more compelling to backers if the money actually matters. Plus, Kickstarter’s core guidelines state, “Projects must be honest and clearly presented.” Is Zach Brown being honest that he truly needed $10 to make a potato salad? Obviously not. I get this. You get this. But does random new project creator who saw Zach Brown on the local news get this? Nope.

5. All you need is an idea. One of the myths about Kickstarter is that all you have to do is think of an idea and make a project for it without doing any legwork, research, or preparation. That’s exactly the message Potato Salad sends. This is probably where the parody element is at its highest for this project, accentuated by the opening line, “Basically I’m just making potato salad. I haven’t decided what kind yet.” I get the joke. You get the joke. But do the thousands of burgeoning project creators who discovered Kickstarter through this project get the joke? They have no context about Kickstarter from which to work, so some of them are going to look at Potato Salad’s sheer lack of effort and preparation and think that Kickstarter is a platform for ideas with no legwork or effort whatsoever. (credit to Board-Dom for making this point in the comments)

I have no ill will towards Zach Brown; rather, I’m protective over my fellow Kickstarter creators who try to do the right thing for backers. I’m guessing Zach thought he’d make $10 from a few friends and that would be that. I don’t even blame Kickstarter–they probably got a chuckle out of the project and thought it might attract a few random backers. But now it’s reached a critical mass, and it’s a problem.

What’s worse is that anyone reading this blog entry already knows the truth behind those myths, but no new creators spawned from Potato Salad have any idea this blog exists. I really hope Kickstarter doesn’t approve any of those projects.

I’d love to hear what you think in the comments. And just to reiterate: I understand that the project is funny. That’s not the point. The point is that it gives the wrong impression to new creators who discover Kickstarter thanks to this project. Hopefully they’ll do their due diligence and research other Kickstarter projects before starting their own (based on the flood of similar projects that are diluting the food category, that doesn’t seem to be the case).

114 Comments on “The Problem with Potato Salad”