A little over a month ago, a frequent commenter and participant on this blog reached out to me with an offer. Chris Harden, who was working on his building Kickstarter project at the time, had noticed that my existing KS Lesson about project videos didn’t go into details about how the various tools a creator should use to create a great video. He offered to write a guest post about it, and that post is here. Thanks Chris!

I love telling stories, and film is my favorite medium.  For my Kickstarter video, I exercised some valuable lessons I learned while studying at Florida State’s Film School.  Jamey has already posted a concise set of core recommendations, and Steve Venezia has delivered a very practical set of tips.  I hope to build on those, but first I’d like to call out a resonant point from each of them.

Jamey says, “Also, remember that you don’t have to cram everything into your main video.”  I didn’t even think of adding second video clips until he mentioned it.  I followed his idea, and people talked about those videos.

Steve says, “Have a practice round”.  I agree, but I recommend having 10 or more practice rounds.  The more you are practiced in your script, yes write a script, the less mechanical you will be when talking to the camera, and the less time of the film crew’s time you’ll waste.  I say this, because Jeremy and I kept changing the script right up until an hour before the crew was there, and we burned valuable time with retakes. 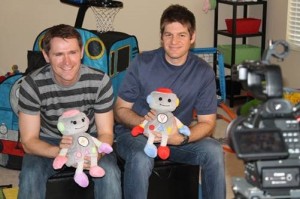 Once you get past memorization (even if it is rough memorization), you should practice your body language.  I built in physical responses to what Jeremy was saying, and I queued my own body language when I spoke as  well – these standard acting techniques will ensure you a projecting the message you want to project when the camera is rolling.  Practice doesn’t make you disingenuous; it makes your message solid.

Here’s my biggest recommendation, right up front, so that if you read nothing past it, you at least get this message.  In film school, I learned that if you are going to write or shoot a comedy, a horror, a romance, whatever, you should watch 10 other movies in that genre to get a sense of the formula. The formula is not only the script, but the shooting style, the pacing, whatever makes that genre, that genre.  Not only do you watch them, but you rewatch them, and you dissect their mechanics.

The same is true for Kickstarter videos.  Like everyone else scrambling to do ten thousand things for their campaign, I had to budget my efforts.  So I picked 5.  I picked 4 in my genre – i.e. comparable products targeted to my same audience.  I also picked Coolest Cooler, because I’m a big fan of that project.  I broke down their flows, looking for common messaging, “problem statement”, “reinforcing the core message”, “why created the project – the dream”, etc…  Of course ALL OF THESE WERE FUNDED PROJECTS.

I tossed those into this excel spreadsheet and looked for common messages and messages that resonated with me (I’m also part of the target market).  I used those common messages to build my own story skeleton (left side of the diagram below).  As long as I hit on all those major messages, I knew I was at least performing on par with my contemporaries in ways that should resonate with my target audience.

Side note, the Coolest Cooler was for a significantly different target market, and it didn’t contribute as much as the others, which makes complete sense in retrospect.  It specifically did not have an emotional appeal like the others and focused more on features, which confirmed the recommendation of picking videos in your genre as guides.  If I had just followed Coolest’s format, I would have missed out on a significant part of our story.  I did snag some things, like his brilliant usage of arrows at the tail end to motivate people to like and tweet.

I wrote and revised the script many times, as we annealed the message.  I use Final Draft – highly recommended.

I built storyboards once with Toon Boom Storyboard (not recommended).  I used Sony Movie Studio Platinum – highly recommended for a cheap, powerful editor.  I used static images snatched off Google image search as needed, and put this animatic together, with a voice over and a still shot of me and my partner doing our initial pitch.  We iterated on it 6 more times, putting it in front of NEW, more, and increasingly less-familiar eyeballs every time, before reaching the message and timing we wanted.

Why do storyboards and rough videos?  Two benefits:

Then spend a little cash, and shoot your video with good equipment, lighting, and audio. If you can, pay someone who knows how to shoot video and how to edit. We used Filmscape.  They should be local to you.  Ask them if they have done a Kickstarter video before.  Companies who have, get its format a little better.  If you prefer to do this on your own, you can shoot with an iPad mini.  Check out this fairly thorough cheap lighting video. And for audio GET A LAV MIC with a  long cable (6-9ft).  The lav mic doesn’t have to be expensive, but it’s absolutely the cheapest and best investment you will ever make in your iPad recordings.  I was taught to do this for our video blog, and it made a wonderful difference.  Find a royalty free soundtrack on one of many sites.  Some make you pay, some don’t.   Just get the licensing right before you use it.

The video has to talk for you when you can’t be there to represent the product yourself.  Pay someone who knows how to shoot video and how to edit.  Doing so will allow you to focus on your messaging.  If you want eyeballs on your video, I’d be happy to give you constructive feedback.  You can contact us via this page.

Chris Harden is Co-Founder of TROBO the Storytelling Robot, a talking plush toy and interactive storytelling app that teaches kids 2-7 about science and engineering.  TROBO is currently live on Kickstarter at https://www.trobokickstarter.com.

8 Comments on “The Project Video: Research, Storyboarding, Animatics, and More”