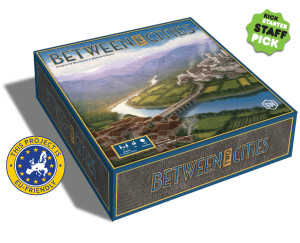 At Stonemaier Games, we offer exactly one Kickstarter exclusive for backers: If you pledge to receive one of our games or products on Kickstarter, starting from the moment you make the pledge and extending until 1 month after you receive your reward, you can return it to us for a full pledge refund for any reason.

It’s one of our tentpole ideas that began with Viticulture and has continued through our current project, Between Two Cities.

You can read my Kickstarter Lesson about this concept here. To summarize, it’s about trust. It’s one of the ways we say to backers, “Trust us with your hard-earned money many months in advance to make something awesome for you.”

The money-back guarantee isn’t necessarily right for other creators, though I’ve been a little surprised that it hasn’t caught on more. I’ve only seen it on a few projects. So I like to share data from my projects in case it encourages other creators to try the same method.

Here are the results of the money-back guarantee for all of our projects, including the new additions to the list, Tuscany and the Treasure Chest. The number is how many backers returned their reward for a full refund:

To put that in perspective, the total number of backer copies of all of those products is 21,000.

These totals don’t count a few backers (about 10 total between all projects) who asked for a refund before we sent their rewards. Usually it was a matter of finances or in decision, along with 1 or 2 cases where people didn’t like the way I was managing the project.

As for the copies of Tuscany and the Treasure Chest that were returned, why did these backers return their games? Here are the reasons for Tuscany (I don’t ask for reasons, but people usually provide them without me asking):

Here are the reasons for the Treasure Chest:

An important aspect of note about our money-back policy is where the backers need to send the rewards if they want the refund. Originally they had to send them back to me, which is a problem for international backers. So I found a group of amazing helpers around the world who can receive the games and use them for replacement parts.

But for all of these projects, backers still had to pay for return shipping. While that makes business sense, it also has never quite felt right to me.

So for Between Two Cities and future projects, we’re adapting the Zappos model: We’ll not only provide a full pledge refund–we’ll also pay for return shipping. That gives us a strong incentive to find a nearby address to which the backer can send their reward, whether it’s a replacement part helper, a local convention, a reviewer, or an ambassador who has gone above and beyond to help us.

We’ll see how it works out! I look forward to sharing that data with you later in the year.