After each of my projects, I like to write a post to show that despite 6 successfully funded projects, over $1.2 million raised, and 143 Kickstarter Lessons written, I’m still kind of an idiot. That is the case on my most recent project, Between Two Cities.

Nne of these posts are meant to downplay the project itself. Yet again we had an awesome group of backers–at 5,287, more than any before on one of my projects–a well-overfunded project ($221,265 on a $20,000 goal), and lots of fun engagement during the campaign. I’m really grateful to have the opportunity to publisher our first game not designed by me.

Mistake #1: Not Revealing Stretch Goals to Ambassadors on the Preview Page

About a month before I launch a Kickstarter campaign, I’ve fully created the project page. I start by sending it out to our advisory board, then our 500+ ambassadors, then retailers, then the press. Each step of the way, I take in the feedback and improve the page. 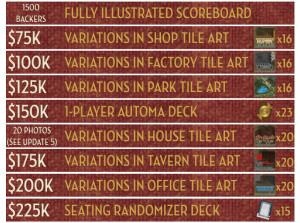 One strategy I tried on Between Two Cities was to not reveal the stretch goals on launch day. There were various reasons for this that I won’t go into here (though I think it was a good idea). I wanted to get feedback on that strategy, and I did.

However, I should have also revealed the full list of stretch goals to those various groups, because I think people would have pointed out a mistake I made with them: Many of the stretch goals involved small variations in the art for each of the 6 tile types (see sidebar illustration).

What I should have done–as backers pointed out during the project–was for each “variation” level to include a new variation for each tile type. That way if we didn’t reach our top stretch goal, there would still be a wide variety of tiles across all types.

I really don’t like to change the format of stretch goals during the project. Honestly, there’s no need to do that after having so many people look at the project in advance.

Solution: In the future, I’ll show everyone who previews the project page the full stretch goal list even if I don’t reveal it on launch day.

Mistake #2: Asking Backers to Provide a Delivery Address Where Someone Can Personally Receive the Game

On all of my projects, I’ve lost thousands of dollars due to stolen packages. When a nice big package from Amazon sits in front of your door all day, it’s inviting people to steal it. 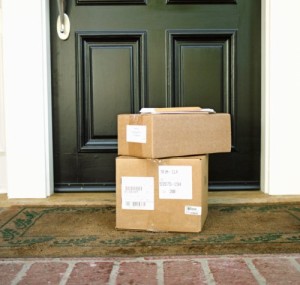 Not only does that cause problems for me, but it detracts from the experience for backers too. Imagine getting a tracking notification saying that the game you’ve waited months to receive has finally arrived, only to come home and find it’s no longer game. This happens all the time.

When the backer notifies me, I always send them another copy, but I always ask for a more secure address. It’s expensive to make and ship one board game, much less two. Plus, we print a limited number of the special editions of our games, so at a certain point we simply run out of games if we have to send too many replacements.

So on each backer survey, I’ve gotten progressively more specific about my desire to have a secure address. This culminated in me adding a question to the Between Two Cities backer survey that specifically asks, “Is the mailing address above an address where a person will be able to personally receive the shipment during the day? (If your answer is “no,” please change the mailing address.)”

However, some backers read this as, “We will not deliver the game to you unless you are personally home all day to sign for it.”

All we’re trying to do is make sure the games are delivered to a secure address. Our intentions are good. But the consternation caused by that question isn’t worth the trouble.

Solution: In the future I’m just going to put a little note at the top of the survey that says, “Please use a secure address to reduce the chances of theft upon delivery,” and I’ll leave it at that.

Mistake #3: Not Generating Enough Creative Energy Around the Project

Kickstarter board game projects are a bit of an oxymoron. You want to reveal as finished a product as possible to inspire consumer confidence and let people know exactly what they’re pledging to receive. You also want to deliver it as soon as possible–with every month you add to the estimated delivery date, the less compelling it is to backers (marginally–I think the real tipping point is 12 months post-project).

At the same time, some of the funnest, most engaging projects are those that leave enough wiggle room for backers to engage in their development.

I talk about this as the 95% rule: You want the product to be 95% complete, and you can engage your backers to create the remaining 5% so they feel invested in it (and make it better in the process).

Between Two Cities was a complete game at the start of the Kickstarter campaign. It had been playtested thousands of times by over 250 people. The art had been in the works for months, and our graphic designer was putting the finishing touches on the rules.

Knowing that I needed something with which to engage backers, I employed a two-pronged strategy:

I thought this strategy (along with other smaller questions and some fun activities) worked well. However, you can’t manage creative energy. In fact, by trying to manage and contain it, you end up shutting it down.

That’s essentially what happened with Between Two Cities. There wasn’t a lot of discussion about the game itself because the game was complete, and I made sure backers knew that. Usually the points that were brought up were about the art and graphic design, not the game design, but we were already so entrenched in both of those elements that I wasn’t as open to feedback as I should have been.

The key constraint was time–if we entertained any of the backer ideas, we would add time to the schedule. After delivering Tuscany 1-3 months after the estimated delivery date to many regions, I didn’t want that to happen again.

Solution: I still contend that it’s important to come to Kickstarter with a tested, well-developed project and a clear vision. However, in the future, I’m going to add a lot more time to the project schedule post-Kickstarter. Even if we don’t end up using that time, at least it’s there so we don’t have the same pressure to deliver at the expense of all the great backer ideas that could have arisen from discussions about the game.

Now that I’ve said all that, I’ll add that I’m very pleased with the Between Two Cities Kickstarter project. I think it’s a great example of a streamlined project (20 days, 4 reward levels) and a well-defined project page, and each of the project updates kept people engaged and involved.

I’ll be back soon to report on the project statistics, but that’s all for now. If you have any thoughts on these mistakes and solutions, I’d love to hear them in the comments.