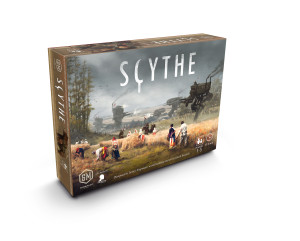 I recently ran a Kickstarter campaign for a game I designed called Scythe. I’ll delve into the stats in a post later this week, but in short, the project was successful, raising $1.8 million from 17,739 backers and garnering (to date) 17,968 comments on the main page. We did this without early bird reward levels or Kickstarter exclusives.

After the dust settles for any of my campaigns, I write a postmortem blog entry about things I learned from the project, particularly mistakes I made that other creators can avoid. This isn’t meant to be overly negative–overall, I’m very pleased with the Scythe campaign, and I’m honored by the ourpouring of support for it.

This is the one big thing that I wish I had done differently, because I really believe it would have worked if I had made a few small–but important–tweaks.

Here’s what I did: I revealed 5 stretch goals on the first day of the campaign, with a note that I would announced 1 new stretch goal every day for the duration of the campaign. It would be based on an attainable amount for that day; like, if the previous day ended at $200,000 and the project was averaging about $15,000 a day, I would make the new goal $215,000. The idea was to give backers a fun reason to check the project page on a daily basis and to give new backers a sense of contributing to something specific that day. Plus, it gave me an opportunity to feature Jakub’s art with a big reveal every day, not just a tiny thumbnail in the stretch goal chart.

I had explained how this was going to work on the stretch goal chart, but it wasn’t until backers saw the huge gap between $158,632 and $675,000 that it really hit them. A small but legitimate number of backers voiced their dismay and anger on the comments of Update #1. They felt like I had disregarded their pledge since it hadn’t “counted” towards any stretch goals. Some backers pulled their pledged or reduced them to $1, vowing to increasing their pledge every day until we reached that day’s goal, then reducing their pledge before I determined the next day’s goal.

There was a lot of negativity in the comments that day. It was unexpected and disappointing, to say the least. I had tried to pack the game with tons of custom, beautiful components at a great price ($59–including a $15 shipping subsidy–for a game that would have an $80 MSRP [even more if you want the promo content post-Kickstarter]). But it didn’t seem to matter. All of the attention was on the daily goal system instead of on the myriad of other cool things we could be talking about.

So I changed it to the traditional stretch goal model. I filled in the gap with a few achieved goals and restructured the remaining goals. I still just revealed one goal at a time, though, to maintain that element of daily discovery I was originally aiming for. We actually ended up reaching about goal a day for the next week, at which point I revealed all remaining goals and their funding amounts.

Here’s what I should have done: It should work a little bit like those holiday calendars with the chocolates behind cardboard doors. On Day 1, showcase a graphic displaying the funding amounts for every stretch goal. However, the goals themselves–the new cards, upgrades, etc–would be hidden. I would reveal one goal each day, even if the funding amount for that goal had already been reached. The chart would also include a spoiler link where backers could click through to see ALL goals. That way they know I’ve actually planned everything out.

The nice thing about that system is that gives you a fun reason to feature goals over the entire project instead of bunching them together at the beginning and the end. You might reach the funding amount for the last goal on Day 5 of 20, but you would still have a sense of progression throughout the project thanks to the daily reveal.

Mistake #2: The Campaign Was Too Long

Now, before I talk about I mean by this, I want to say that I greatly enjoyed the Scythe campaign. It was a lot of fun, and the sense of community was truly awesome. I’m not saying the campaign was too long because it was a drag or anything like that.

Rather, I’m saying the campaign was too long because it didn’t need to be 24 days to achieve what we set out to achieve. Everything we did in 24 days we could have done in 12-16 days instead. I think we would have raised the same amount from the same number of backers, we would have had great conversations during and after the project, we would have time to fix little things early on in the project, and it’s still enough time for new-to-Stonemaier folks to discover the project. We would need to make sure that we released the PnP of the game (and Tabletopia) before launch day, though.

Note that I’m not advocating that every creator run 12-16 day projects. Pick the length that’s right for you.

Mistake #3: Getting Caught Up in Negativity on BGG

The vast amount of chatter on BoardGameGeek during the Scythe campaign was positive, constructive, or collaborative. Which makes it more of a shame I let a few negative threads get under my skin. I spent too much time and energy reply to them instead of engaging on the other threads.

I had a healthy chat about this with my co-worker, Morten, during the project. Morten is good at identifying when I’ve let something get under my skin and aren’t responding as well as I should. He pointed out that I didn’t need to be the one to reply to those threads, especially when the project is so close to me. That was really helpful for me to hear.

A Few Things I’d Do Again

I’ll talk about some of these things in the stats post later this week, but here are a few that aren’t stats-driven:

One final note (added 12/6/15): I would probably call this a mistake, but not in a way that suggests that things will turn out poorly due to this. Basically, for many months I had it in my head that Scythe’s MSRP would be $70. Based on the quotes we were getting from Panda, that was a bit of a stretch, but I was confident it was fine. So I determined and announced the Kickstarter price ($59, with $15 shipping built in) based on that MSRP.

However, as we got closer and closer to the campaign and I continued to enhance certain components, I realized that I was putting the long-term viability of Scythe at risk by keeping the MSRP at $70. So I consulted with a few people and decided to increase it to $80. At that point I didn’t feel comfortable increasing the Kickstarter price to $69 (as it would have been if I had known earlier that the MSRP would be $80), so I decided not to change anything. I guess the lesson here is to not announce the prices any earlier than necessary? It’s tough to do, because some people plan their Kickstarter budgets well in advance–you might be surprised how many people asked for the KS prices 5-6 months in advance of the campaign.

I’d love to hear your thoughts and questions in the comments!

Also read postmortem insights from my other campaigns or my live-blogging lessons written during the Scythe campaign:

If you’ve read my crowdfunding book and have some opinions about it, I would be honored if you shared them in the form of a review or rating on Amazon. This is a great way for you to spread the messages of community, generosity, creativity, and selflessness I talk about in the book.