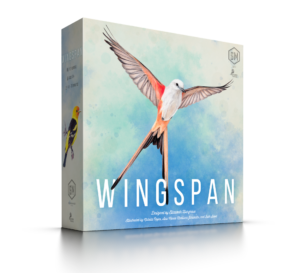 Well, this went better than expected!

The last time we accepted preorders for a new game, Between Two Castles of Mad King Ludwig, it was a bit of a surprise announcement. The game was well received, and we sold around 600 copies directly to consumers within a 1-week span. The experience set my expectations for what a direct order from Stonemaier Games would be.

Flash forward to today. The Wingspan preorder has been live for 5 days (1 more to go), and we’ve sold over 4700 copies directly to consumers. [Final update: We sold 5105 before ending the 7-day preorder]. Some of those copies have already shipped from fulfillment centers, and the others are in the works. I’m incredibly grateful for the enthusiasm shown by early adopters for this game, and I’m happy for new designer Elizabeth Hargrave to have such a success out of the gate.

Granted, there were a few small differences in the methods I used for Wingspan:

Otherwise the process was nearly identical, notably the difference between our preorder fulfillment (within a few weeks) and the retail release date (2 months later). In the long term, the vast majority of these games will be sold by retailers, but it’s very helpful for our cash flow to have some sales up front.

Another noteworthy statistic is the huge increase in Stonemaier Champions in alignment with the Wingspan timeline (Champions are people who support content like this blog and my YouTube channel with an annual contribution of $12, and they get a few perks like free/discounted and early shipping).

For Between Two Castles, we gained about 175 Champions. For Wingspan, over the last 40 days since the soft announcement, we’ve gained 1247 Champions. Provided that I engage those Champions with compelling opportunities over the next year, they could be incredibly helpful in stabilizing our up-and-down finances.

It’s always hard to tell with these things if it’s the strategic differences that resulted in the increase in sales or if it’s more about the product itself. Probably some combination of the two.

While the Wingspan preorder has gone well, there certainly have been some hiccups that need addressing for future preorders:

With 1 more day for preorders and several weeks for fulfillment, I’m sure there’s still more to learn. Also, I bet you have some thoughts and observations, and I’d love to hear your opinions.

75 Comments on “The Wingspan Preorder: Stats, Mistakes, and Lessons Learned”