Top 10 Elements of Other Kickstarter Projects in 2015

My fellow creators inspire me every day to be a better crowdfunder and entrepreneur. I’m inspired not just by the innovations I see on Kickstarter, but also the way I see my fellow creators treat people with kindness, respect, and personality on social media and at conventions.

So as I did in 2013 and 2014, today I wanted to reflect on all of the projects I backed in 2015 and look at the most interesting, innovative, and clever elements. I’m not going to reference my posts from this year containing unique elements of various projects, but there might be some overlap. I’ll try to summarize each element within a single sentence.

10. Happy Mitten Podcast: I love the old-school approach of messaging every backer with a personal thank-you note–it speaks to the way the folks at Happy Mitten connect with their listeners.

9. Campaign Trail: I love that Campaign Trail implemented the voting theme during the project by tracking the states of each US backer–it gave backers a fun reason to encourage other people in their state to back the campaign.

8. Knot Dice: This campaign is a testament to the power of having a truly photogenic prototype at any cost, and it inspired me to go big on my Scythe prototypes.

7. Hocus: Hocus showed me that a project can succeed and thrive without any stretch goals at all.

5. Monstrous: I love the use of big block quotes from a variety of reviewers on the Monstrous project page to summarize their opinions–with that many reviewers, it’s a lot easier to read a few quotes than to read every review!

4. Super Troopers 2 and Exploding Kittens: These two campaigns were my first exposure to achievement-style stretch goals, a system with which I experimented on my latest treasure chest campaign.

3. Dan Ariely’s Irrational Card Game: Behavioral economist Dan Ariely has built a fanbase for years now, and the fans showed up in droves to support him on his first Kickstarter project. 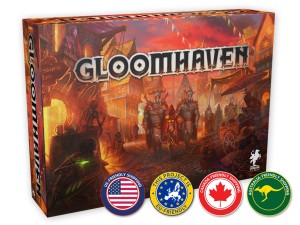 2. Trickerion: I love that instead of early bird shenanigans, Trickerion offered a time-sensitive stretch goal that benefited everyone if the project funded within the first week of the campaign (which it did).

1. Gloomhaven: The post-project updates for Gloomhaven are the best project updates I’ve ever read–they’re engaging, full of personality, and strike the perfect balance between mystery and forward momentum.

Is there a singular element about any projects you backed in 2015 that stood out as you as something you loved and would like to see elsewhere? If you like reading about clever things other project creators do, you’ll likely enjoy the many anecdotes I share in my crowdfunding book.