Last week, 60,819 people converged onto Indianapolis to attend Gen Con, a massive gaming convention. I was one of them.

This was my fourth Gen Con, and unlike the other three times, Stonemaier Games didn’t implement any sweeping changes to the methods we used the previous years. We still had a sunshine-filled conference room with plenty of scheduled events. We still hosted open game nights each evening. We still ate well and slept well (most nights). You can read all about those aspects on last year’s blog post.

However, this year was still different in a number of ways. I tried some new things and learned a lot, and I wanted to share those highlights and lessons with you.

2. You’re at Home with Us: My number one goal at Gen Con is to make people feel at home in the Stonemaier area. It’s a sunshine-filled conference room in the Marriott. It’s not too loud, we’re not selling anything, and the foot traffic is minimal. It’s a haven for introverts, even the open game nights. And what we find is that many people didn’t just stop by for one demo, never to return. A considerable number of people made our area a home base of sorts. They hung out there when they had nothing else to do. They’d stop by just to say hi. They were there for every game night. There are many similar pockets like this at Gen Con–ours is just one of them. But I’m really glad we were able to provide that experience, especially for my fellow introverts. 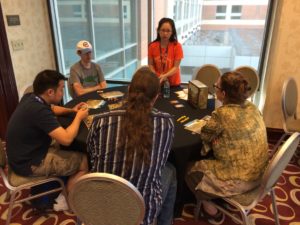 3. Ambassador Stats and Strategies: This year we had a core team of 8 people (other than me) and 12 other volunteers who helped out from time to time. They were awesome. The biggest feedback I got from them last year is they wanted more universal methods for teaching our games. So a few weeks before Gen Con, I sent out specific instructions on my recommended teaching method for each game. The basic structure is to give a quick thematic overview, explain what a turn looks like and how to win, then start the game. For the first 5 minutes, the teacher takes turns for the players, then they give players more and more freedom, explaining rules as they arise. I think some ambassadors tried different methods, but my sense was that they appreciated having formal guidelines in place. 4. Fans Are the Best: People have asked me to sign games in the past, and it feels great. I’m flattered and honored to do that. This year stood out in these regards particularly because a number of people traveled with their games (Scythe in particular, but other games too) so I could sign them. If you’ve held the Collector’s Edition of Scythe, you know it’s not a small or light game, yet I signed dozens of copies. I can’t express enough how much it means to me that people traveled with those games and lugged them up to our room. Really. Thank you. 5. I Met One of My Coworkers for the First Time: Three people work at Stonemaier: I (Jamey) am full time. Alan (co-founder) is part time. And for the last year, Morten (developer/solo designer) has also been part time. Morten lives in Denmark, and I’m in St. Louis, so I’ve never met him despite having interacted with him for nearly the entire 4 years of Stonemaier Games’ existence. So it was truly a special moment and day for Morten to show up on Thursday near the end of a cross-country US visit. He sat in on some pitches, he watched the Euphoria expansion being played, and he and his family dined with the Stonemaier team. This was a major highlight of the convention for me. Morten designed part of a non-Stonemaier game that’s currently on Kickstarter, Hostage Negotiator.

6. It’s Nice to Make a Profit: For the last 3 years, we’ve earned $0 in direct revenue at Gen Con, as we’re not allowed to sell stuff from our conference room. This year, though, because we shipped Scythe earlier than expected and due to Cephalofair Games not having Gloomhaven available yet, we were able to sell to sell Scythe through the Cephalofair Games booth. Isaac and his tireless team sold all 1000 copies available to them. My only regret is that I didn’t mix in some of our other games, as we were actively teaching Scythe, Between Two Cities, Euphoria, and Viticulture. I never made it down to the exhibit hall, but some friends took photos of the Cephalofair booth: 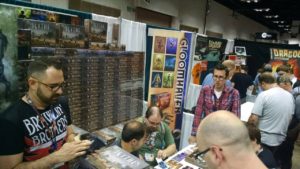 7. Demos and Expansions: We had 5 big tables set up in our conference room, 1 table for each of our games and a middle table with Scythe set up on it for people to look at it and get a quick overview. Each game had six 1-hour learning sessions every day. The sessions were $2 ticketed events, as we wanted to encourage people who pre-paid for the events to actually show up (that was somewhat successful, but there were still plenty of no-show slots that were mostly filled by random onlookers). This strategy worked better than last year, when people could sit down and play the entire game during 2-hour timeslots–we were able to teach twice as many people this year. The one struggle was with Euphoria, which was listed in the event guide as “Euphoria with the expansion prototype”. Some people (experienced Euphoria players) signed up specifically to play the expansion, but most people only wanted to learn Euphoria. which was frustrating for the experienced Euphorians. We found that with Tuscany last year too. So from now on, I think we’ll only have demos for the base game, and we’ll schedule just a few specific events for upcoming expansions that require prior knowledge. 8. Cookies! On a whim a few weeks ago, I asked a friend and ambassador if we could pay her to make themed cookies for each of the games, just to add a little flavor (pun intended) to each of the teaching sessions. I found this to be a fun, personal touch, and attendees seemed to enjoy the Scytherdoodles, Between Two Chippies, Rustic Vineyard Cookies, and Euphoria sugar cookies (shown below): 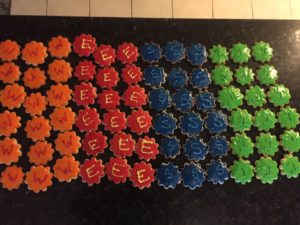 9. Game Night: Every night from 8:00-11:00, we hosted a big open (but ticketed) game night from 8:00-11:00. Last year it got a bit crowded, so this year we bought the four big tables just outside of the room specifically for the game nights. This let us accommodate about 50 people at a time. I spent most of that time talking with people who weren’t able to make appointments with me during the day (more on that below), but the attendees seemed to have fun playing games. The one key thing I learned–relating to my philosophy that I want my team to be well rested–is that it’s important to start to shut down by closing the doors at about 10:45 (same with any time of the day when we’re getting close to shutting down for a meal). Otherwise you get sucked into one more game and one more conversation, and the next thing you know it’s 12:30 and your brain won’t turn off so you can sleep. Some people love that aspect of Gen Con, but I’m quite ineffective without 7-8 hours of sleep. 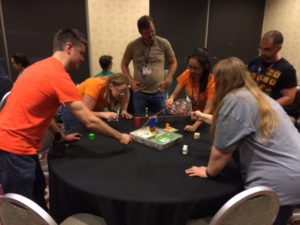 10. The Passion of the Designers: I spent the vast majority of my time hearing game pitches with Alan. I had 12 appointments a day split between two tables (for the 30 minutes while I was at one table, the next designer could set up at the other table). Some of the appointments were press- or advice-related, but most were pitches. My overall impression is that I’m in awe of the creativity and passion of today’s game designers. No matter the quality or marketability of the game, I love seeing people who love what they’re working on, and I saw a lot of that love at Gen Con.

The best pitches were those where the designer gave a brief explanation of the game (3-5 minutes at most) and then we started playing, with the designer guiding us until we got the hang of it. This let us get a feel for the game. When we had about 5 minutes left, I’d ask/say the following:

So that’s my Gen Con experience. If you were able to attend it too, what’s one highlight and one lesson learned?