As I reflect on this year’s convention, it’s still hard to tell how this act of fate impacted our approach to Gen Con (Alan is currently recovering from surgery and will be fine). Sure, it was just me in the 55+ meetings I ran, but most of the participants didn’t know the difference, as they’ve always dealt with me in the past.

This Gen Con highlights list is going to be all over the place. My previous list about preparing for a convention will be much more useful to you. These are roughly in chronological order. 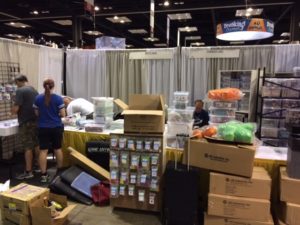 2. Special Product Partners: While we sell to distributors and retailers around the world, we have special agreements with a few companies that help us sell products we couldn’t otherwise sell. Chad and Marlene of Top Shelf Gamer are pictured below–they sell our realistic resource tokens (among many other specialty tokens and accessories). Meeplesource sells our promos (along with a lot of other stuff), and we “shared” a booth with them to sell some of our bigger products. I say “shared” because they ran the booth from start to finish–I wasn’t involved at all. They did a fantastic job representing Stonemaier in the exhibit hall. 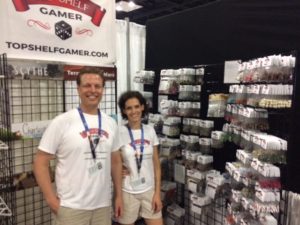 3. My Favorite Game’s Designer: I had the spectacularly good fortune of hanging out with Ted Alspach of Bezier Games. Ted happens to be the designer of my favorite game, The Castles of Mad King Ludwig, and he even spent the time to teach me how to play his new game, The Palace of Mad King Ludwig. Because I spent the rest of my convention in meetings and mingling, this was the only new-to-me game I was able to play. 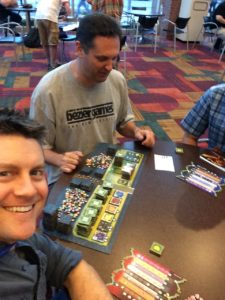 4. My Little Scythe: On Wednesday night I heard from Hoby Chou, co-designer of an unofficial, just-for-fun Scythe spinoff called My Little Scythe. Hoby had originally planned to be at Gen Con all 4 days and attend our game nights, but he had to leave before the convention even began. Fortunately he caught me right before I was going to bed, and I dashed down to the lobby to meet him and see the beautiful prototype of My Little Scythe. After following the story of this game for months now, this meeting was particularly special for me. 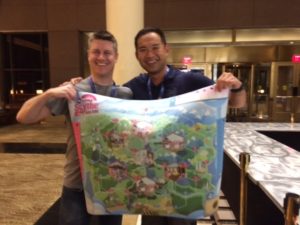 5. 55 meetings in 4 days: If you look at my camera, you’ll see a sharp dropoff of photos once Thursday began, because it really was a matter of back-to-back meetings every half hour (and into dinner and sometimes lunch) from then on. Here is the meeting room I used. There were actually several other meeting rooms in the Hyatt that went unused. I rented mine directly from the Hyatt, and I’d recommend the same to anyone else who wants a quiet space for private meetings that isn’t far from the convention center.

The one thing I’d change next year is to have a visible clock on the wall in the room to help both me and the person I’m meeting with see that their time is running out, just to make sure they can respect the time of the next person. I found this to be tough to do without a clock (a phone didn’t have the same impact). 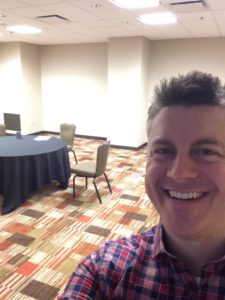 6. Distributors, Retailers, and International Partners: The majority of my meetings were with people in these categories. I found it incredibly helpful to get face time with these people, as the vast majority of my interactions are over e-mail. The photos below show a few of the people at Matagot, Surfin’ Meeple, and Feuerland with whom I work. Here’s one new thing I learned from each of these categories:

The one thing I wonder is, are these meetings necessary every year? I certainly don’t think it would hurt to meet with international partners once a year (and many of them I just genuinely enjoy hanging out with), but I do think there’s a big dropoff in value between the first meeting and the second meeting. 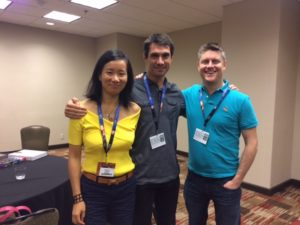 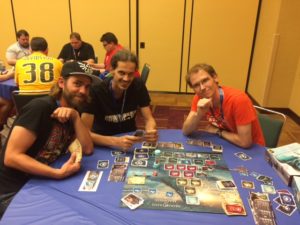 7. Game Pitches: Last year we had a ton of game pitches, but I think those meeting slots filled up with other people before the designers had their chance. As a result, we had 10 game pitches. It really seemed to help that game designers signed up for these meetings via Setmore instead of the Gen Con event system, because it meant they had to read our submission guidelines in detail instead of just the title of the event. As a result, there was only 1 game pitched to me that wasn’t even close to our wheelhouse. The rest were quite solid.

I didn’t take photos of pitches, so here’s a photo of Jabba the Hutt instead. 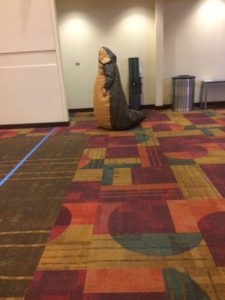 8. Media: Another 10 or so meetings were with members of the board gaming media who wanted to talk about our upcoming games. I found this to be a really helpful way to hone my 2-minute summary of a game. The one thing I might do differently next year is pitch first to someone I know (rather than to the first media meeting) to smooth out any bumps. The photo below shows the wonderful Alex from Gin and Tonic Films. 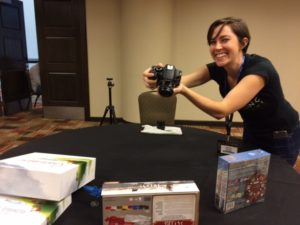 9. Game Nights: It’s become an annual tradition for Stonemaier to host an open game night for anyone (particularly Stonemaier fans) to bring any game they want and play it with friends and strangers. A lot of our games hit the tables, but a variety of other old and new games from other publishers were played as well. We had 10 tables in convention center room 121.

My role at these game nights was to play host (or “bride,” as one friend said). I spent all 3 hours walking around to each table and around the room, chatting with and greeting people, some of whom stopped by just to see me (which was quite flattering). It was awesome to put faces to many of the names of people I’ve seen on BGG and various Facebook groups over the last year.

While having volunteers at these open game nights wasn’t necessary, it was helpful to have them collect tickets (that’s how we prove to Gen Con that people actually showed up) and to open the doors (I was always in a rush to get there in time from my dinner meetings).

One other important note that may resonate with other creators who have great fans: Gen Con is a fantastic way to remember that you are not famous. I spend a lot of time engaging online with people who know me or my company, but at Gen Con, no one knows who I am. Even some people who attended my game night had no idea. This is incredibly important for my ego and self-perception.

10. Breakfast: I think I discovered a breakfast hack that may help others like me who need to eat breakfast every day but don’t have time to wait in line at Starbucks for 20 minutes. When I woke up on Thursday morning, I ordered blueberry pancakes from room service. I’ve never ordered room service before, and it was incredibly expensive. However, I only ate 1 out of the 3 pancakes, and I happened to have a zip-lock bag. So I put the leftover pancakes in the bag and kept the fork. I ate those pancakes for breakfast on Friday, Saturday, and Sunday morning as well. This turned an overly decadent and expensive breakfast problem into a cost- and time-effective solution. 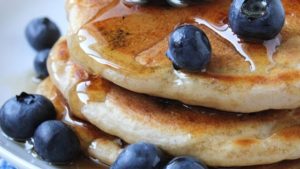 That was my Gen Con! The word I would use for it is “productive.” How would you describe yours?