About a year ago, I started subscribing to tons of game- and Kickstarter-related blogs. I discovered the majority of them by starting with a few blogs I knew and clicking through to their recommended blogs, and so on.

However, what I really wanted was a blog that aggregated links to other game-design blogs. That’s when I found Cardboard Edison. They were exactly what I was looking for and so, so much more. If you are a game designer, you must subscribe to the Cardboard Edison Tumblr and Twitter feeds.

So when I found out that Chris and Suzanne Zinsli had designed a game to be published by Van Ryder Games, I needed to know more. Chris and Suzanne were generous to send me a review copy. My business partner got it first and loved playing it with his wife, so I gave it a try and really enjoyed it as well. I didn’t think I would enjoy a rapid-fire game like this as much as I did, and I’ve found myself thinking back to the games I’ve played, trying to figure out how to improve my score.

Tessen is currently fully funded on Kickstarter, but there’s plenty of time to get in on the campaign. Even if you’re not interested, I think you’ll enjoy the following interview with Chris and Suzanne of Cardboard Edison and A.J. of Van Ryder Games. 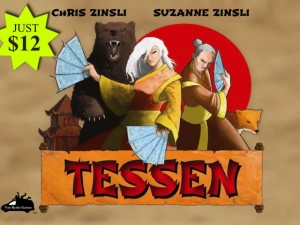 1. Can you describe your Kickstarter project and why you’re passionate about it?

Suzanne: Van Ryder Games is running a Kickstarter campaign for Tessen, which is our first licensed game design. It’s our baby. We spent a lot of time testing and developing the game.

Chris: We’re always looking for good two-player games, and that’s one reason why we decided to create Tessen, which was developed specifically for two players.

AJ: Listen, Tessen is a GREAT game! For me, working with Chris and Suzanne has been a real treat. This is my first go at publishing someone else’s design and I couldn’t be happier about it. I don’t subscribe to the model of just taking the game as the publisher and the designer goes on their merry way. The Van Ryder Games publishing model is about collaboration and Chris and Suzanne have been involved from the outset. We have discussed everything as a team. I have told them from day 1 that I want them to be proud of the final product and anything that put that at risk just wouldn’t be an option.

2. The core element of Tessen is real-time gameplay. Although I generally enjoy games where I can carefully plot my strategy, I had a lot of fun with Tessen and I like how fast it plays because of the real-time mechanism. Could you name three other games that, if people like those games, they’ll also enjoy Tessen?

Chris: As far as games that most people would be familiar with, Tessen was designed to have the fast pace of games like Spit or Speed, only with more strategic decision-making. It’s also been compared to real-time games like Dutch Blitz, Jab and Brawl.

Suzanne: We’ve also had people who are more into video games say that they like Tessen because it reminds them of playing a first-person shooter.

3. Was the real-time mechanism always part of the game, or was there a point when it wasn’t played in real time? If so, what prompted the change to the current version?

Suzanne: It’s always been played in real time. We tried early on playing the game using turns, but it just wasn’t as fun.

Chris: The real-time aspect makes it difficult to second-guess your choices in the moment, so making decisions on the fly becomes more of an instinctual process for the players. It’s a very different experience in real time. 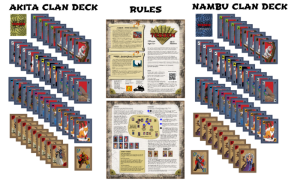 4. As you know, we at Stonemaier Games try to make games that scale from 2 to 6 players. Tessen is solely a 2-player game…or is it? I’ve seen some card game Kickstarter projects (like Deck of Thieves) that are made for X number of players, but you can combine two sets to play with 2X players. Tessen isn’t particularly conducive for that due to the back of the cards, but if you sleeved them, you could feasibly play a game where you have adjacent interaction like in 7 Wonders and a common discard pile. I’m sure you’ve considered all this, and there’s probably a reason why you’re specifically calling it a 2-player game. Could you share your thoughts on this?

Chris: We did test various ways of making the game available for more than two players, and the game is absolutely playable if you want to combine two sets. However, we designed the game so that it’s a satisfying challenge to monitor the entire game state on the fly with two players. More players increases that difficulty and chaos exponentially. We wanted to make a game that does one thing really well.

Suzanne: A.J. actually came up with a great multi-player option: Tessen tournaments. The tournament concept works great with this game because it’s so quick to play and fun to watch. The Kickstarter even offers a “tournament pack” with four copies of the game for $40.

AJ: I want to throw in another “pseudo” multiplayer way of playing. The credit goes to Paul Leoncavallo of The Cardboard Jungle podcast, but basically it is a “winner stays” sort of approach. So if you win you keep playing but the loser gets up and whoever called “Next!” gets a chance to take out the champ. I thought that was a really cool way of playing Tessen, especially at a family gathering or other event with lots of socializing!

5. A.J. at Van Ryder Games did a great job with your Kickstarter page. $12 is an amazing price point for any game, and I love that he incorporate our money-back guarantee concept. I think the $15 level is particularly clever. I don’t know how many backers will actually choose that level, but I like that (a) it sets an anchor price for the game so backers clearly know the discount they’re getting, and (b) it gives people a nice opportunity to pledge at a slightly higher level if they can spare the $3 and want to show their support for you. Given the amazing asset Cardboard Edison is to the gaming community, I could see people choosing that option. I don’t even know if I have a question here, but if you’d like to expound upon that level or talk about your favorite pledge level, here’s a good space to do so.

Chris: We love that A.J. is experimenting with various Kickstarter pledge levels, and the $15 level is one of his interesting ideas. With Kickstarter, backers are always free to pledge a little bit more to a campaign if they want to, but the $15 level puts this option front and center.

Suzanne: I think the most interesting level that A.J. created is the $40 level that gets you a copy of Tessen Classic (which uses traditional Japanese artwork) within a few days of backing the project. There has been a lot of mistrust of Kickstarter project creators recently, and this is a way of making a show of good faith. He’s trusting the community in exchange for trusting him. My favorite pledge level is the 10-pack for $90. It’s the most bang for your buck. It’s great to have the game on hand for tournaments or for gift-giving. The game is suitable for people of all ages.

AJ: Chris hit the nail on the head with regards to the $15 level. Most people probably never consider you can pledge more dollars regardless of what reward tier you choose. This is our way of making that a little easier and giving folks a chance to pitch in that little extra if they are so inclined. And the $40 level Suzanne mentioned… well that is sold out in less than 48 hours. I think that one is really a winner for all involved. 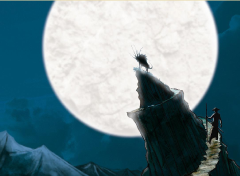 6. What are a few key elements and principles you incorporated into your project that you think future Kickstarter creators could benefit from knowing? You’ll be about 10 days into the project when this interview goes live—what have you learned during that time about running a Kickstarter? What has your involvement looked like so far?

Suzanne: A.J. is the one behind the Kickstarter campaign, and we think he has done an amazing job. We’ve just tried to spread word about the campaign, and we’ve been there to offer feedback to A.J.

Chris: Maybe the biggest thing we’ve seen is how important it is to help out other people in the gaming community. So many of the early backers were people we’ve communicated with through Twitter. Even before the Kickstarter launched, we already felt like we’ve been repaid a hundred times over by the community.

AJ: It is a great point about Twitter and one I have made quite often since our first campaign. Time and again I have seen project creators dismiss the notion, but the problem is that usually those are the folks that show up on Twitter are active for a month and expect everyone to back their project. It doesn’t work like that. Really Twitter is just the medium to make connections. The value is in the meaningful relationships you form with those connections, but you have to be involved and just be genuine with people. As I write this, Twitter is solidly in 3rd on the list of backer referrals behind Direct traffic and native Kickstarter browsing if that tells you anything.

7. Last, I just wanted to thank you for the amazing resource Cardboard Edison has been for me over the last year. You seem to have an uncanny knack for finding new game design blogs—how do you do it? I’ve spent quite a bit of time going from blog to blog (I subscribe to at least 100 game-related blogs), but I would say at least once a week you post a link to a blog I’ve never heard of that has a wealth of content. Do you have a secret for discovering those blogs?

Chris: The game design community online is pretty tight-knit and willing to share, so word tends to get out quickly about new blogs. But the conversation goes fast too, and staying on top of it can be difficult. Twitter and a good RSS reader are incredibly useful for keeping track of everything. We’re just thrilled that other people can benefit from our blog.

Like what you see? Check out Tessen on Kickstarter now.